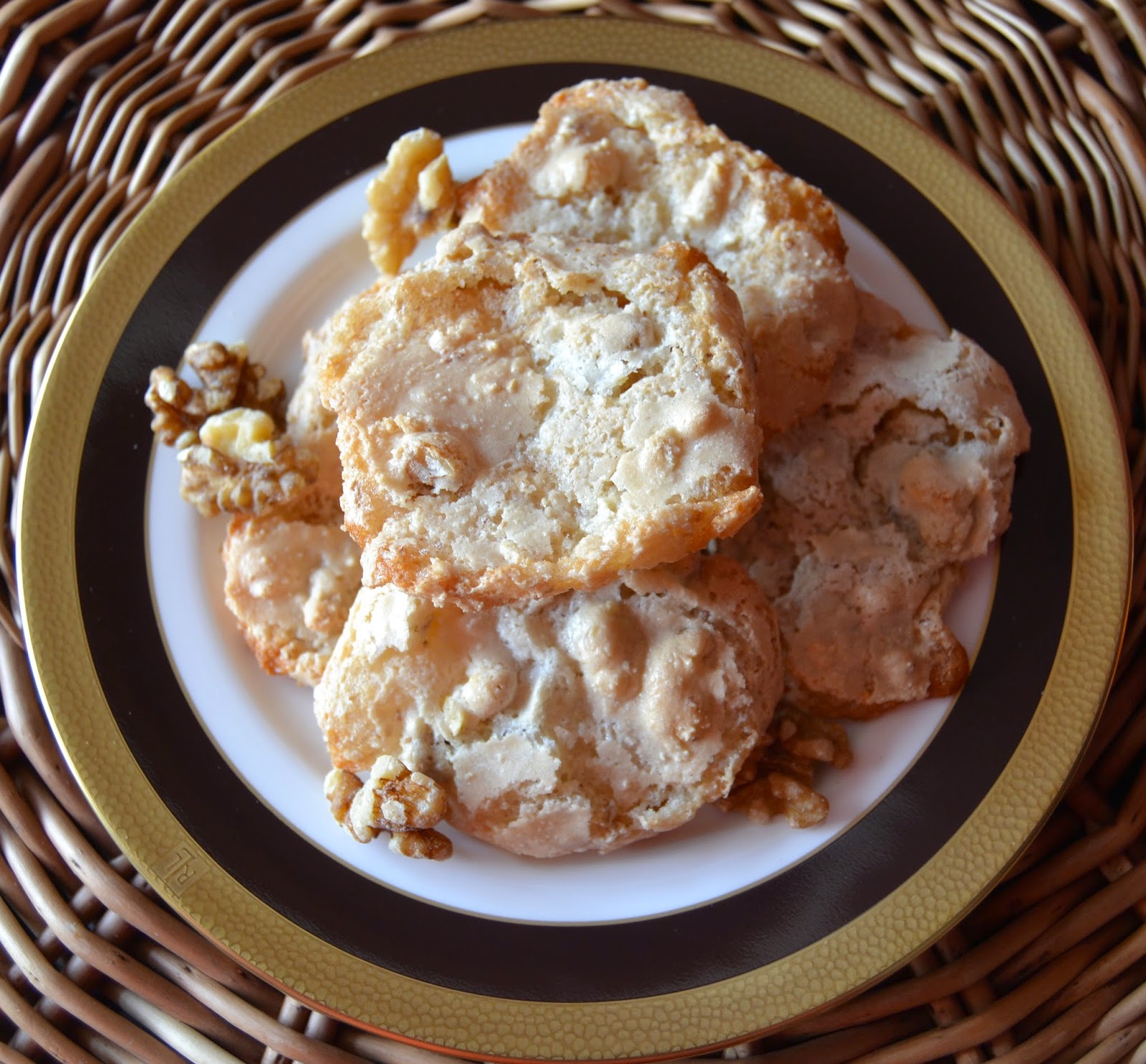 When I started mixing the ingredients for these cookies I had my
doubts that they would hold. Blending the egg whites with the sugar/
nut combination was difficult enough, but adding the bit of flour
called for, I was sure I would need another egg white. But, as Dorie
mentioned, this is not the cookie dough that you typically expect. 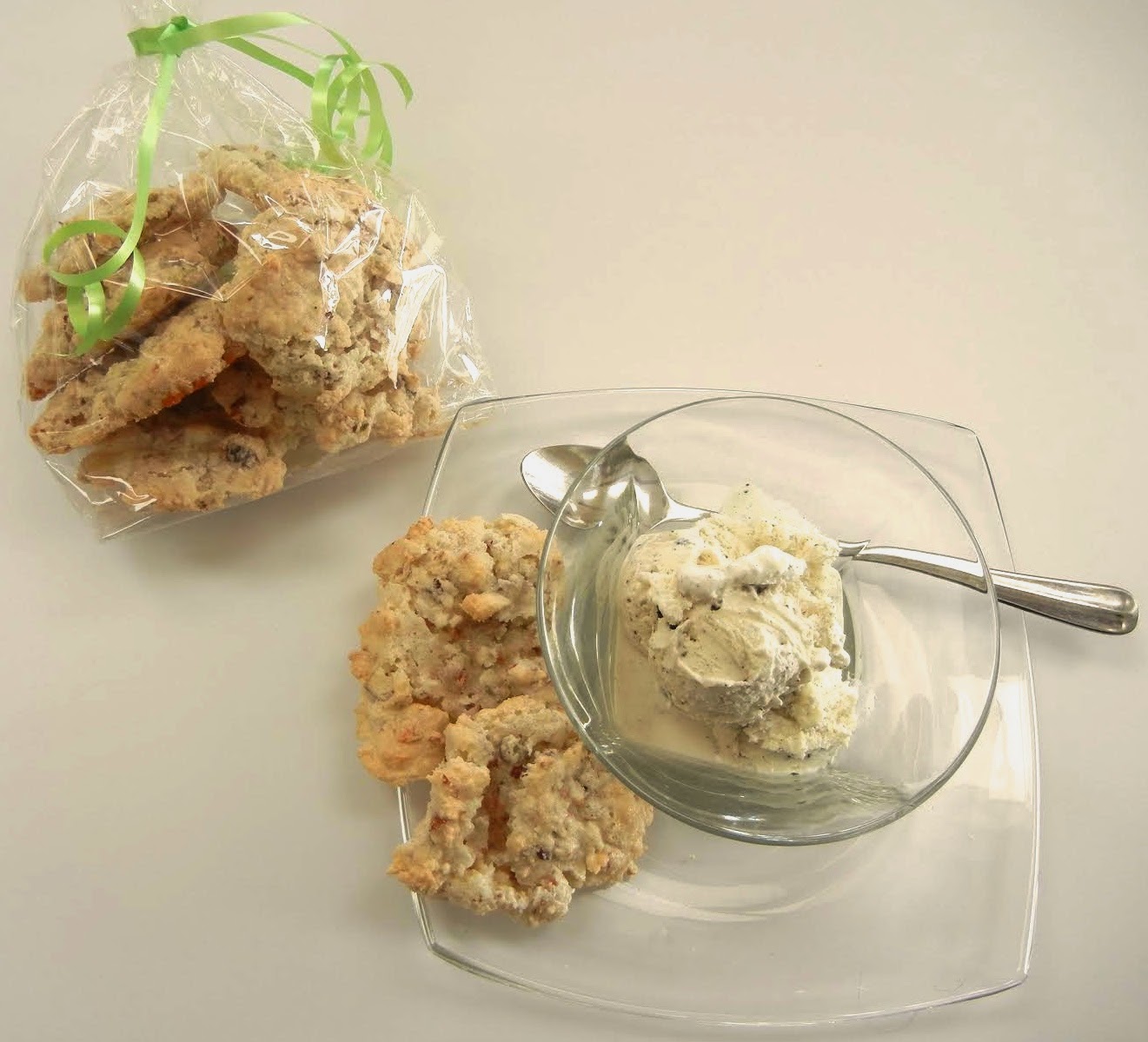 I think my interpretation of a teaspoon is a lot different than Dorie's
because the yield was only 2 dozen cookies. That said, we really didn't
need more since we are still working on the "weekend cake" from
"Baking Chez Moi". At this rate how I am ever going to get through Lent ? 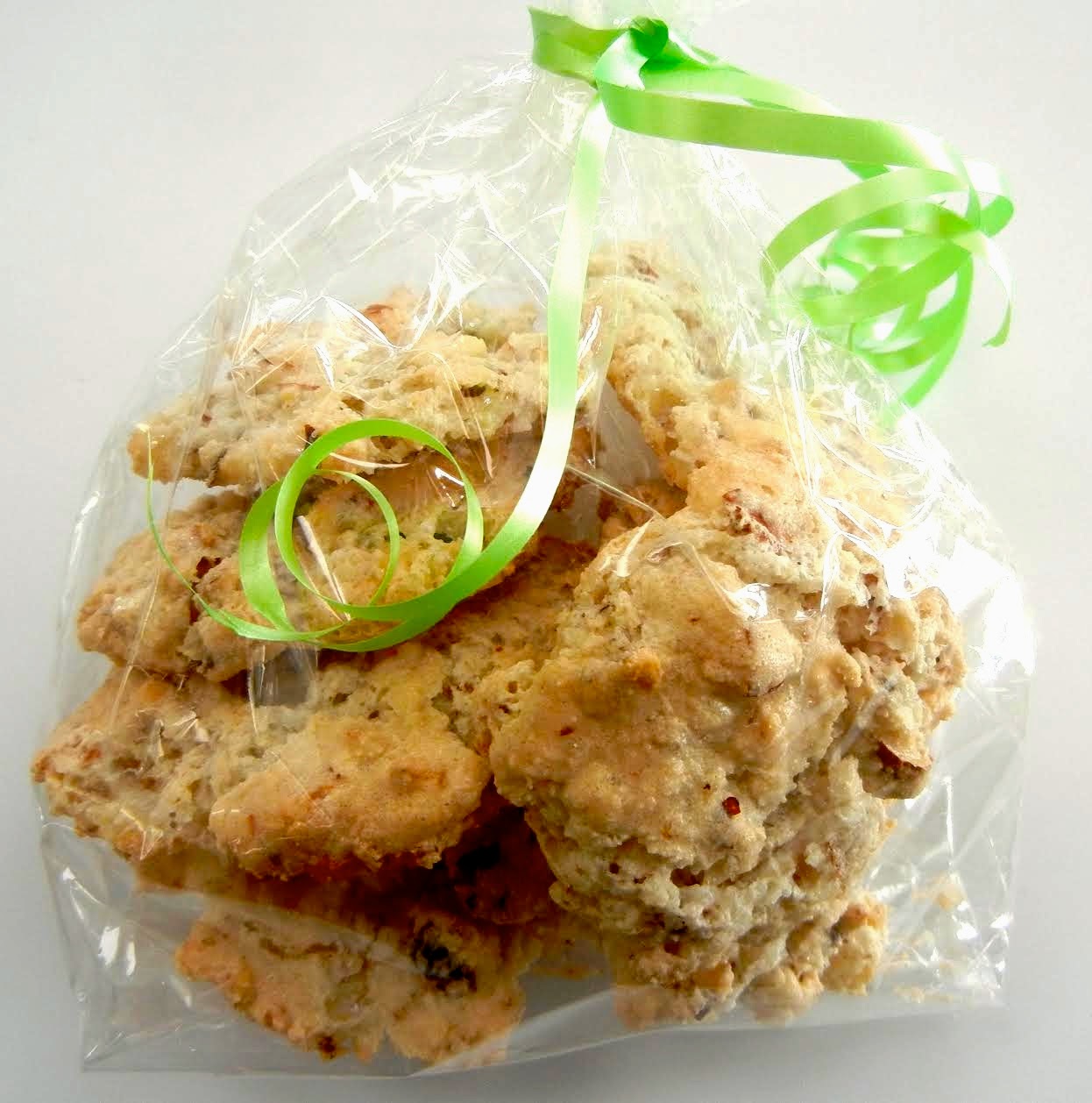 The cookies came out fantastic, so tasty and delicious, and considering the
amount of sugar- they were not too sweet. This is a great way to use up
extra egg whites and any nuts hanging around in the fridge or freezer.

I am not sure how I missed this treat in my visits to France, or more likely
I did see them and had no idea what they were. It was a delight to learn of
them this week via AMFT.  I especially enjoyed thinking of the famous ice
cream shop, Berthillon, creating these from all of the left over egg whites. 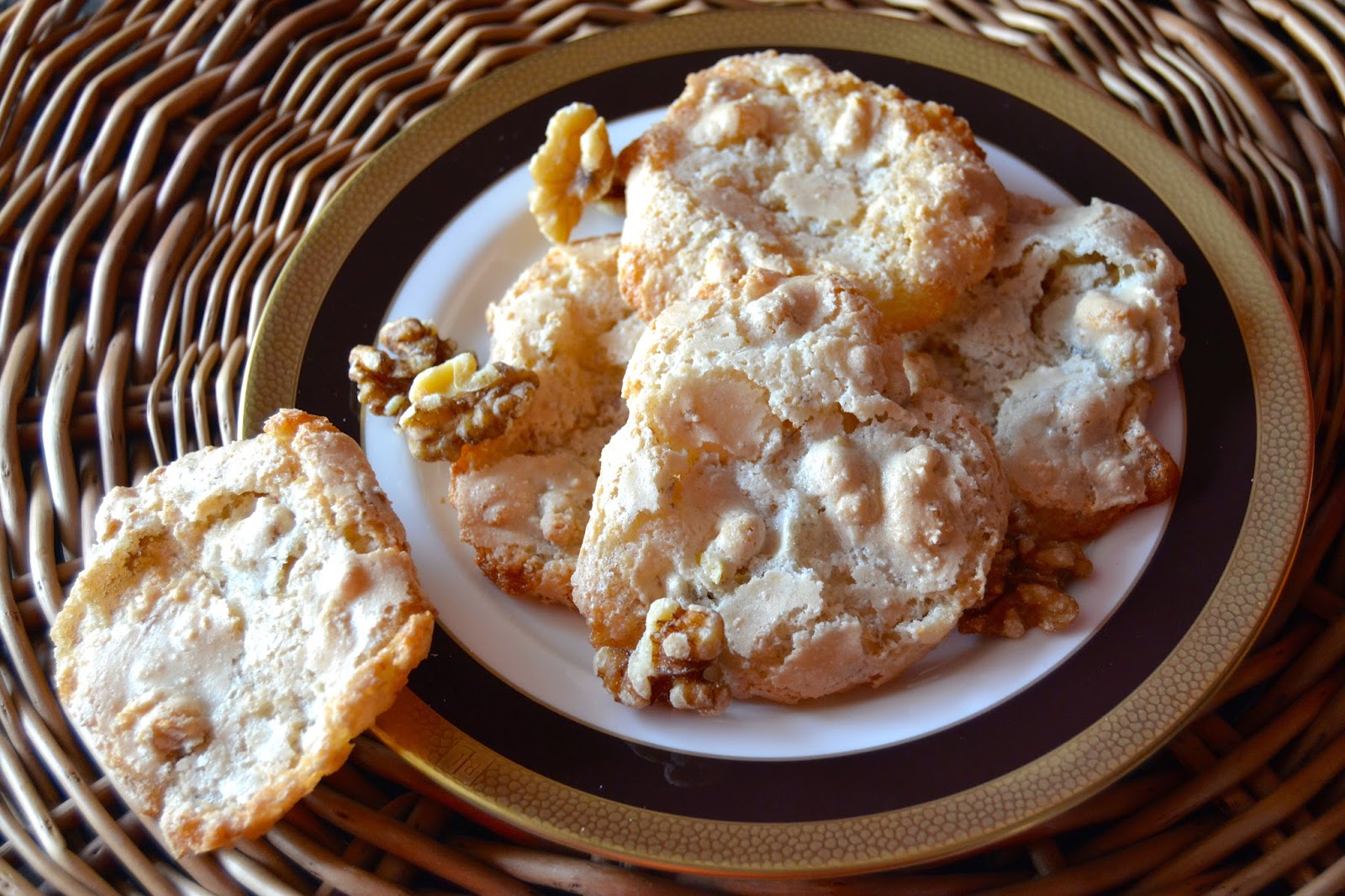 I teased Nana that I would have loved a cross reference in the index
of "Around My French Table" which indicated which recipes used
only a yolk, and which only egg whites. I am not organized enough
to recall whenI am looking at extras but I think I will at least
remember a new trick for making amazing use of the whites. 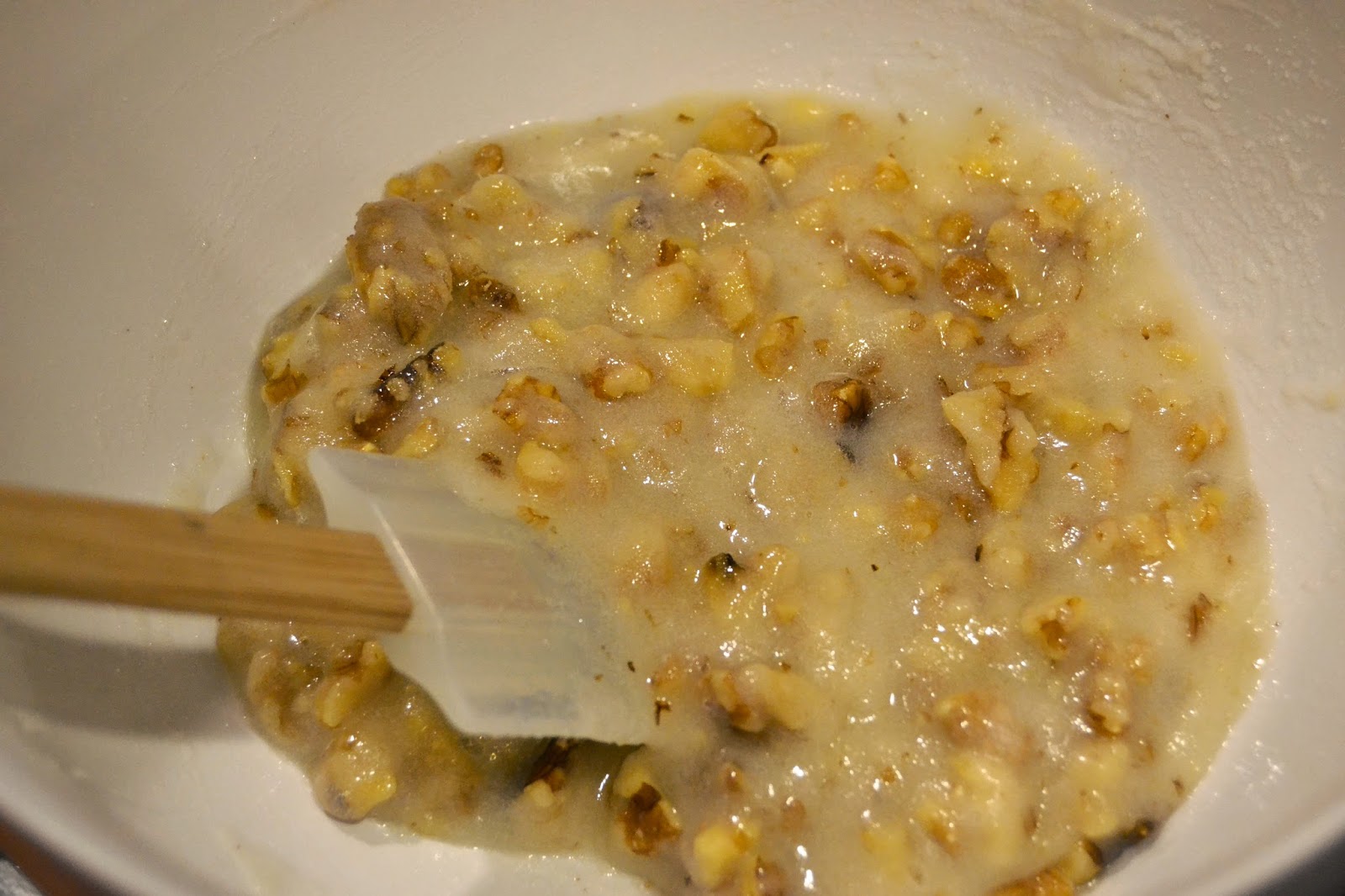 These were interesting in every way and I was appreciative of Dorie's
comments regarding how unusual the cookie batter would look.
Because it definitely was not your standard concoction. 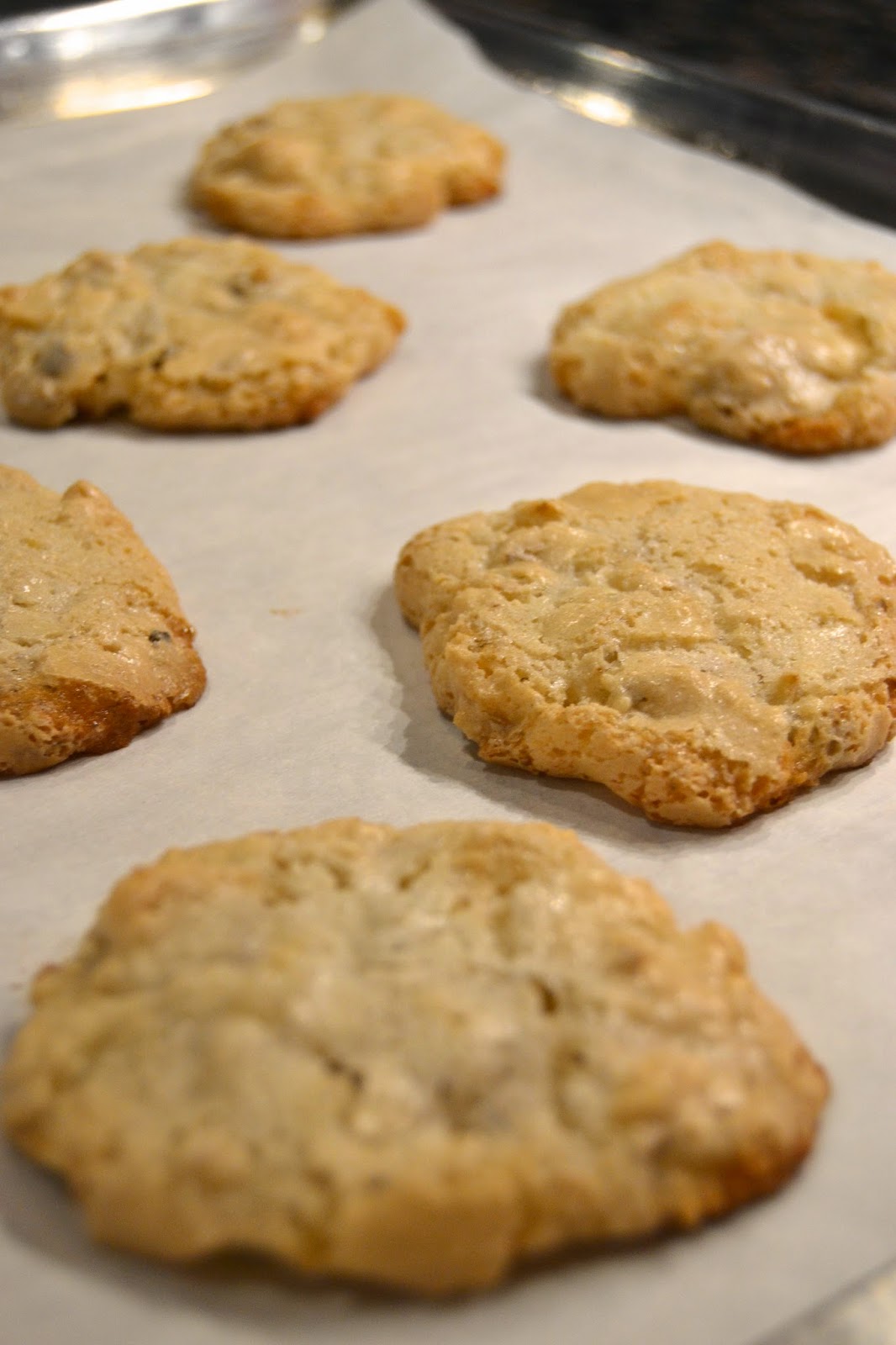 I decided to use walnuts mainly because I had a huge bag left over
from the holidays. My husband's first remark was that he was
surprised they were not more sweet and didn't have a stronger
flavor. Which is a good thing, in his book. Considering the
amount of sugar involved, his comment surprised me. 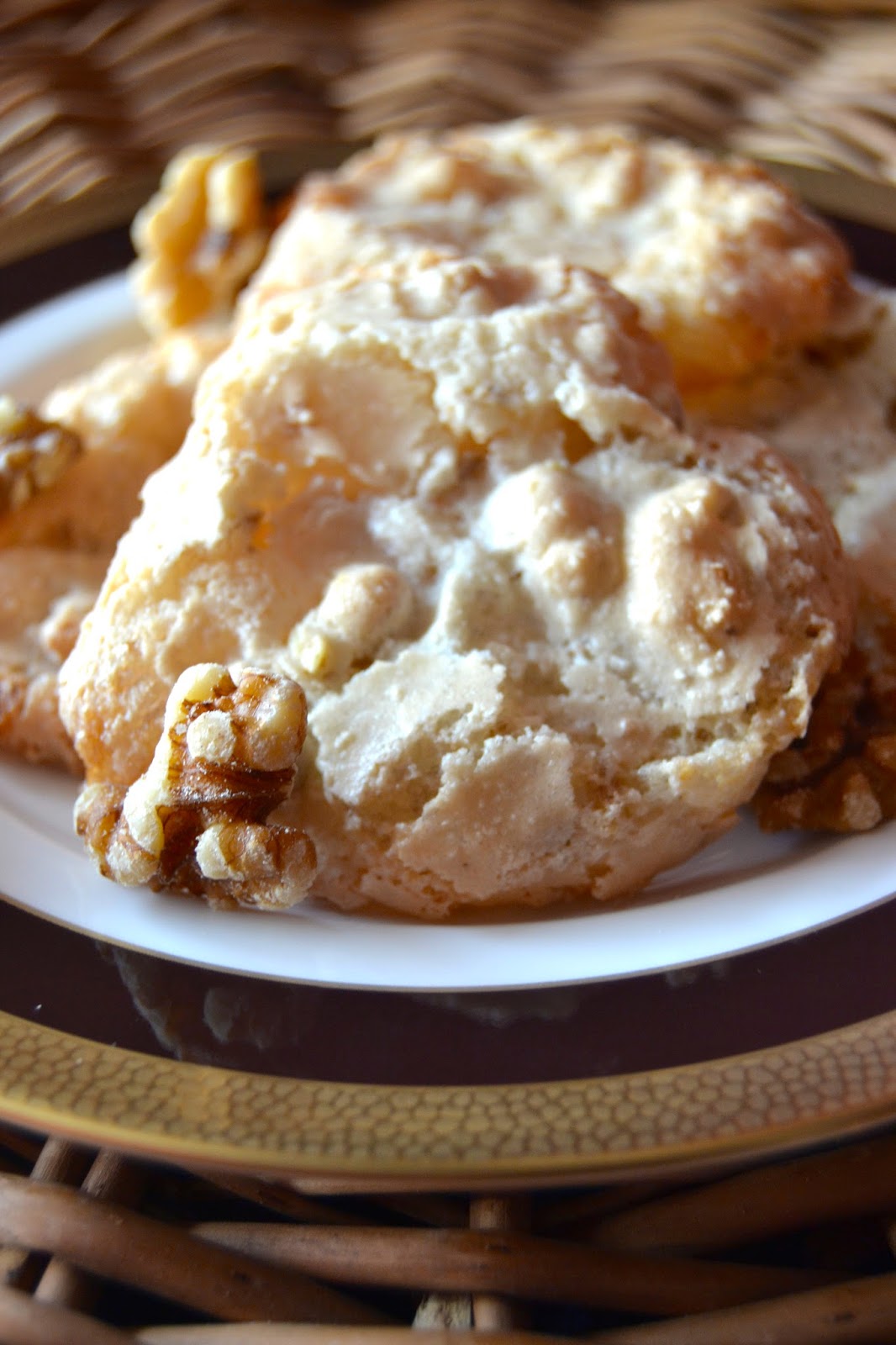 The texture and taste was very nice and elevated a few leftover egg
whites and nuts to something quite special. Those are my favorite recipes.
I will very likely make these again as a special treat for the family but they
are also quite company worthy. Especially if that company is already
getting creme brûlée which used up my egg yolks......
Posted by tricia s. at 4:25 AM 14 comments: 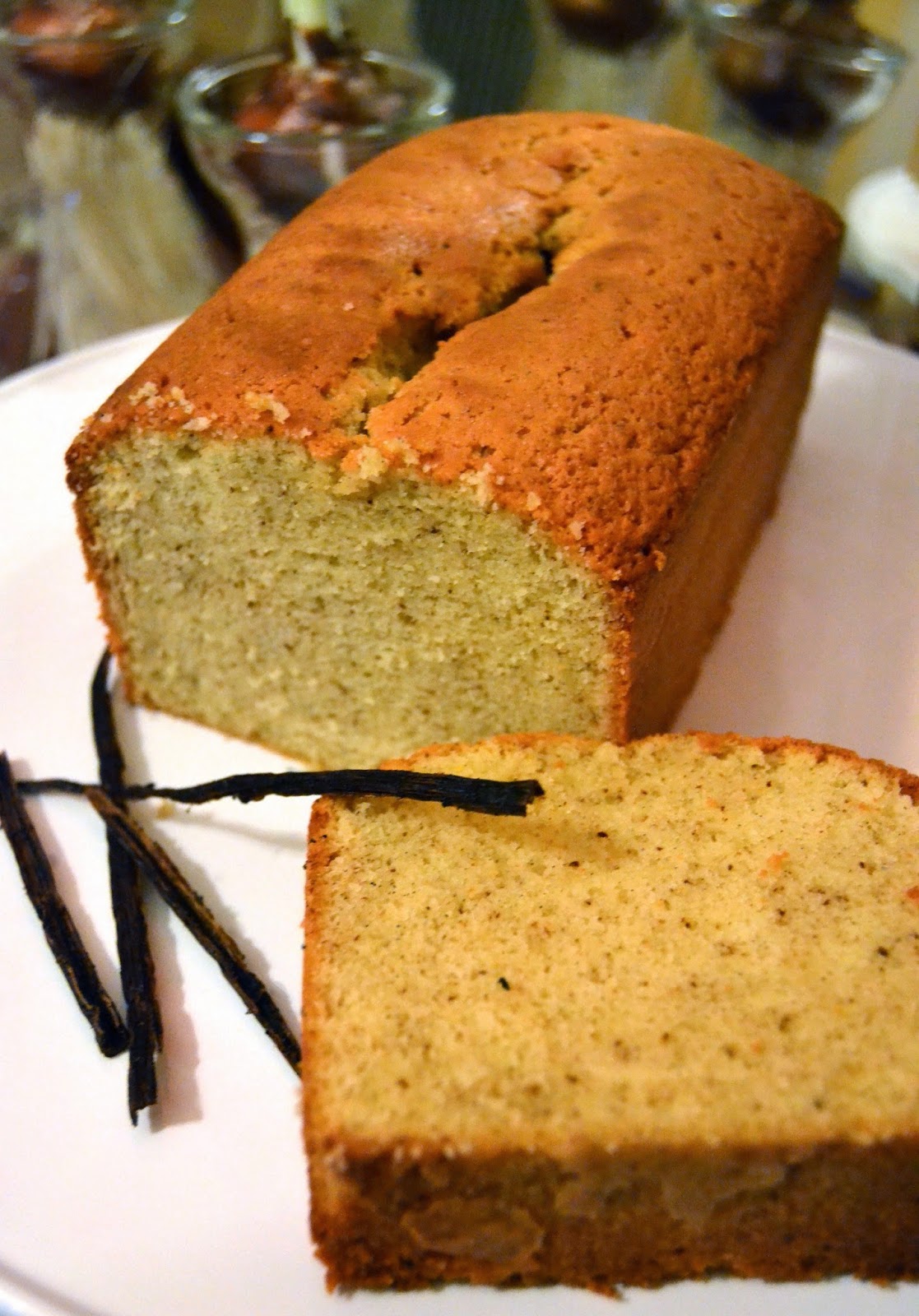 Dorie suggests wrapping this delicious cake to let it age for a day.
Let's face it, that doesn't work. The combination of the vanilla
flavored sugar and the beurre noisette made that impossible.
Jim could not wait for the cake to come out of the oven. 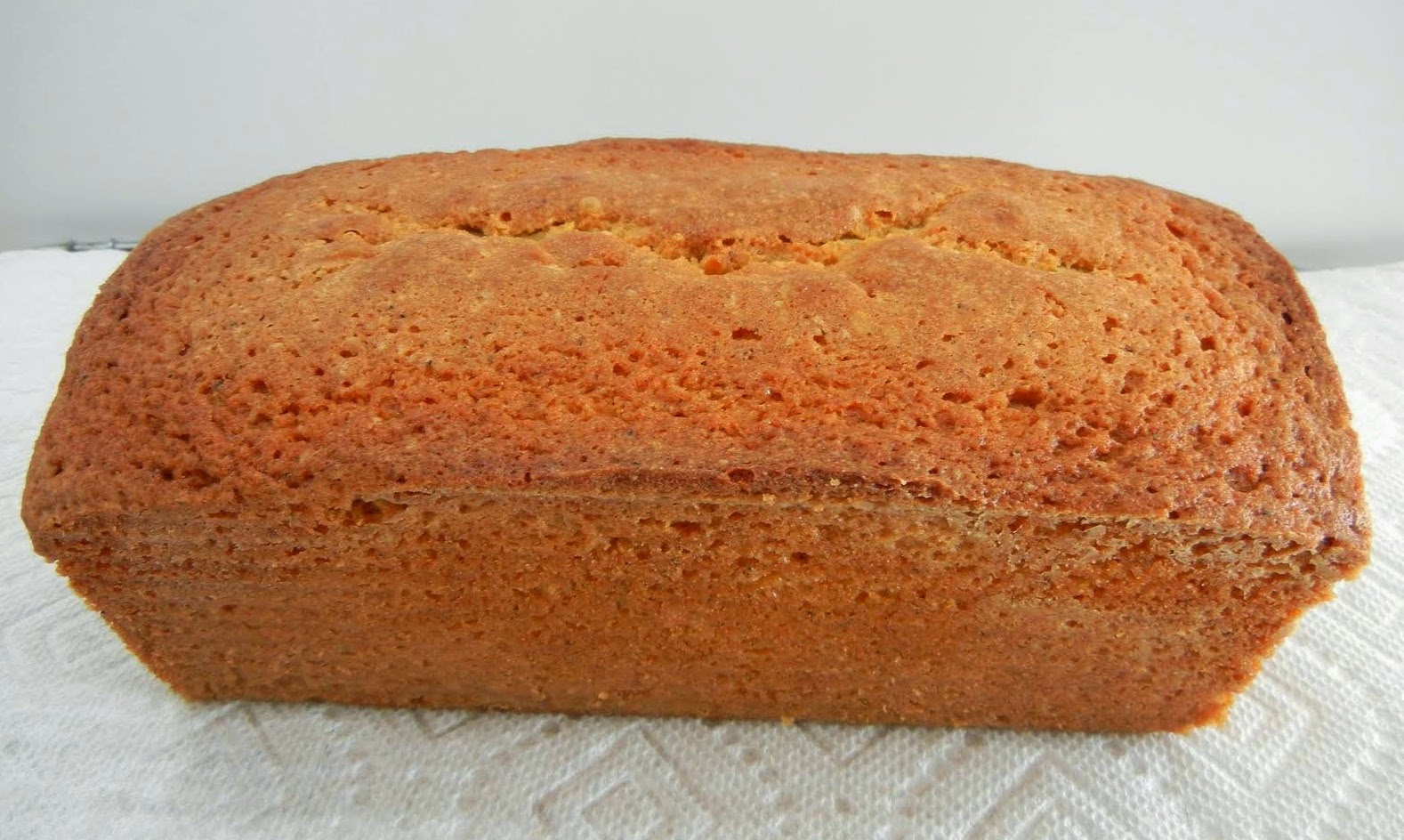 The recipe is so simple and easy, a perfect cake to prepare for a
weekend of nibbling. I started out baking it for 55 minutes, but
decided to add another 10 minutes to give it a bit more color.

We tasted a small piece, plain, and it was delicious. Then after
dinner I served it with a bit of Kir Royale jam and fresh cream. This
is definitely a pound cake that I will make again- I just love the flavor.
Per Tricia~

I love vanilla. I love cake. I love simple things.
Needless to say, this simple vanilla pound cake was quite the hit.
It was truly easy and much quicker to prepare than I anticipated.
The name refers to the French lingering over the cake for a weekend,
enjoying it here and there but for me "weekend" in a recipe name should
be associated with something that is more of a production.
Like that Gingerbread Bûche de Noël, for instance :) 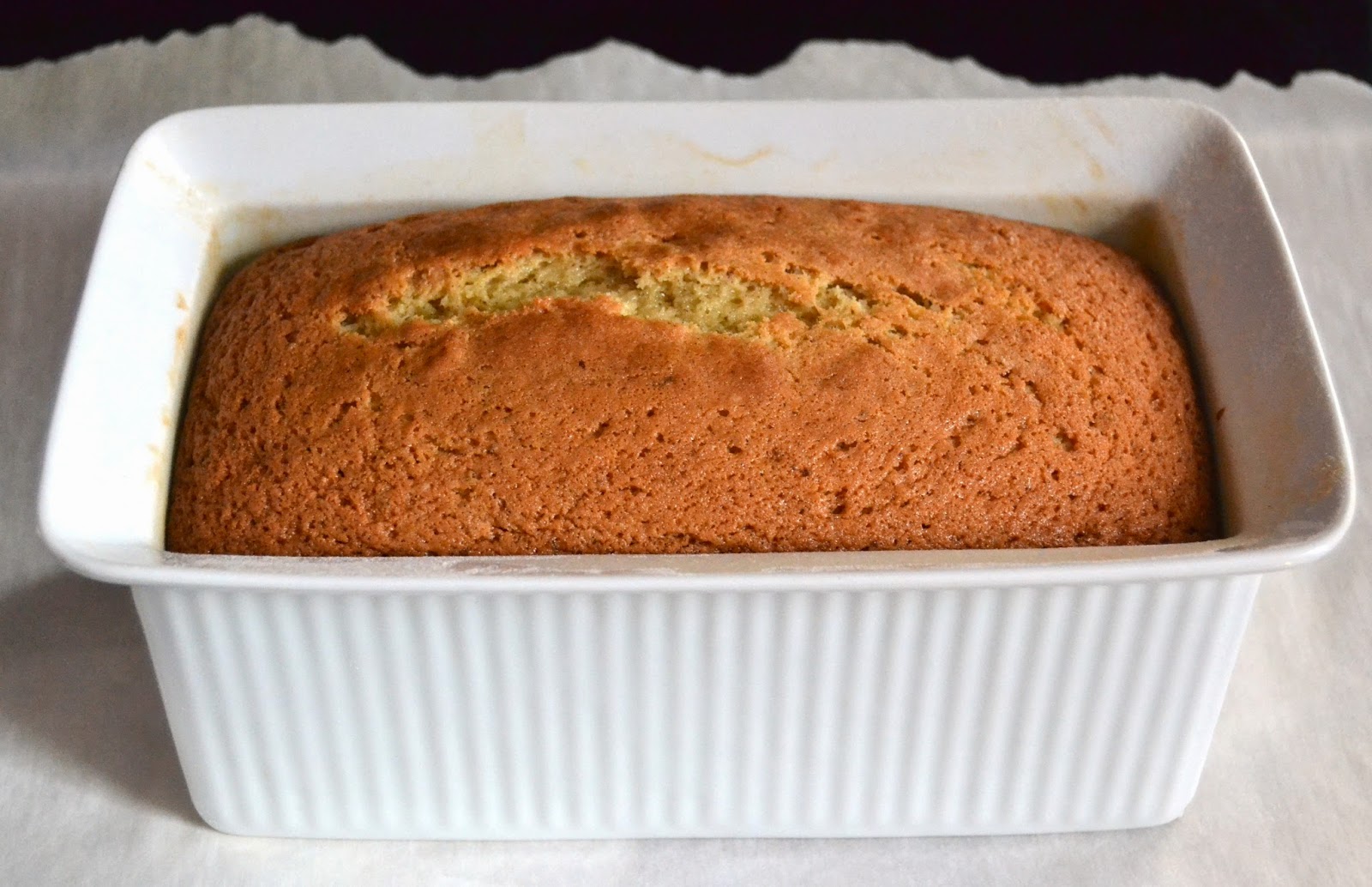 Making one of these on a weeknight would be a snap and likely
be the perfect thing to get us all through a busy week. 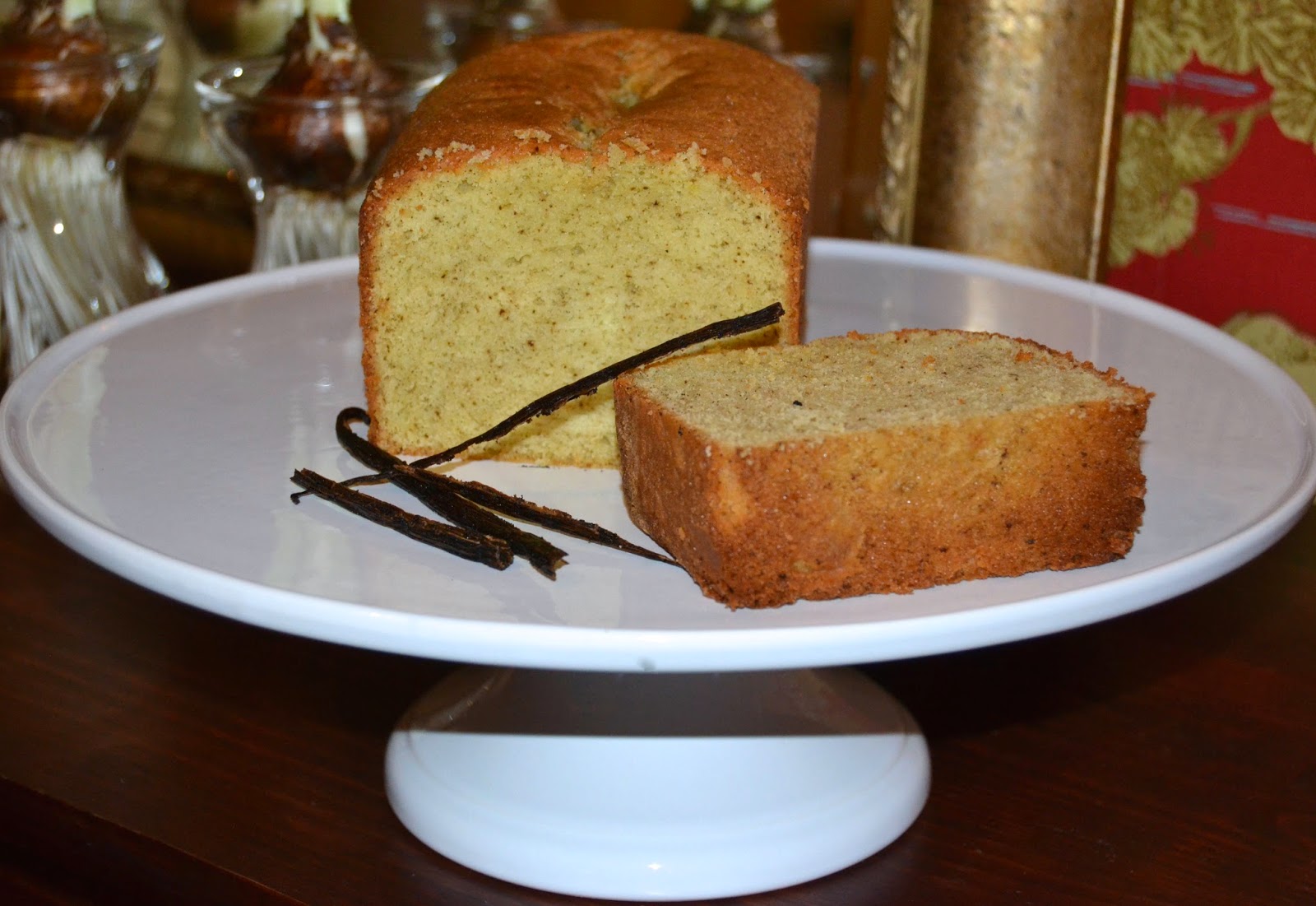 The taste testing started by my licking the bowl and I knew we were
in great shape then -the batter literally tasted like creme brûlée.
Off to a good start.
The completed cake tasted like a combination pound cake and a Breton
butter cake, which is basically a genius balancing act in my book. This is
a keeper and I am already planning to make more and ship off to the
boys at school. I will also stock one or two in the freezer for company. Or
perhaps for a week night when we simply need more cake.......

This week's recipe and a make-up too ! 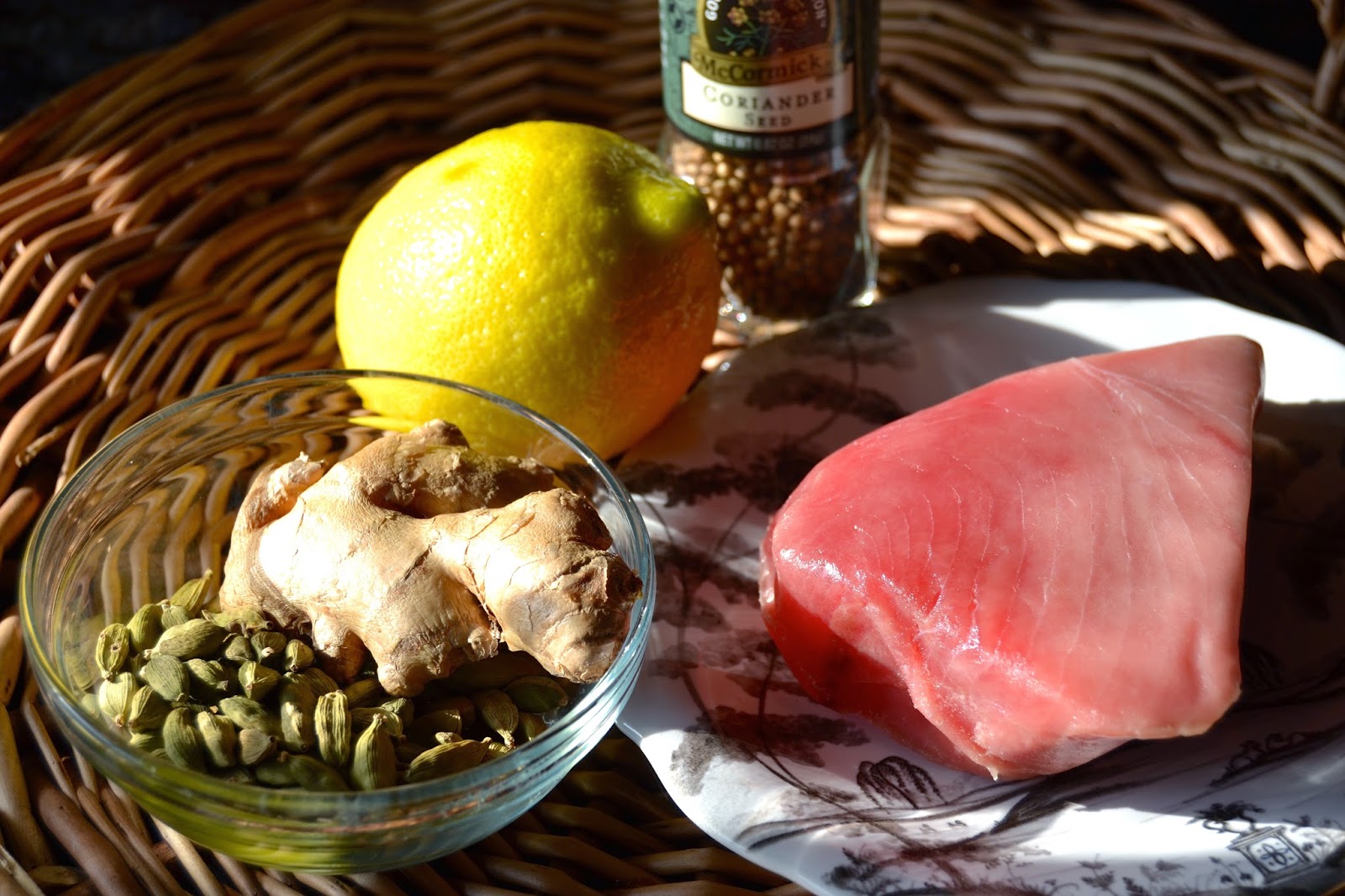 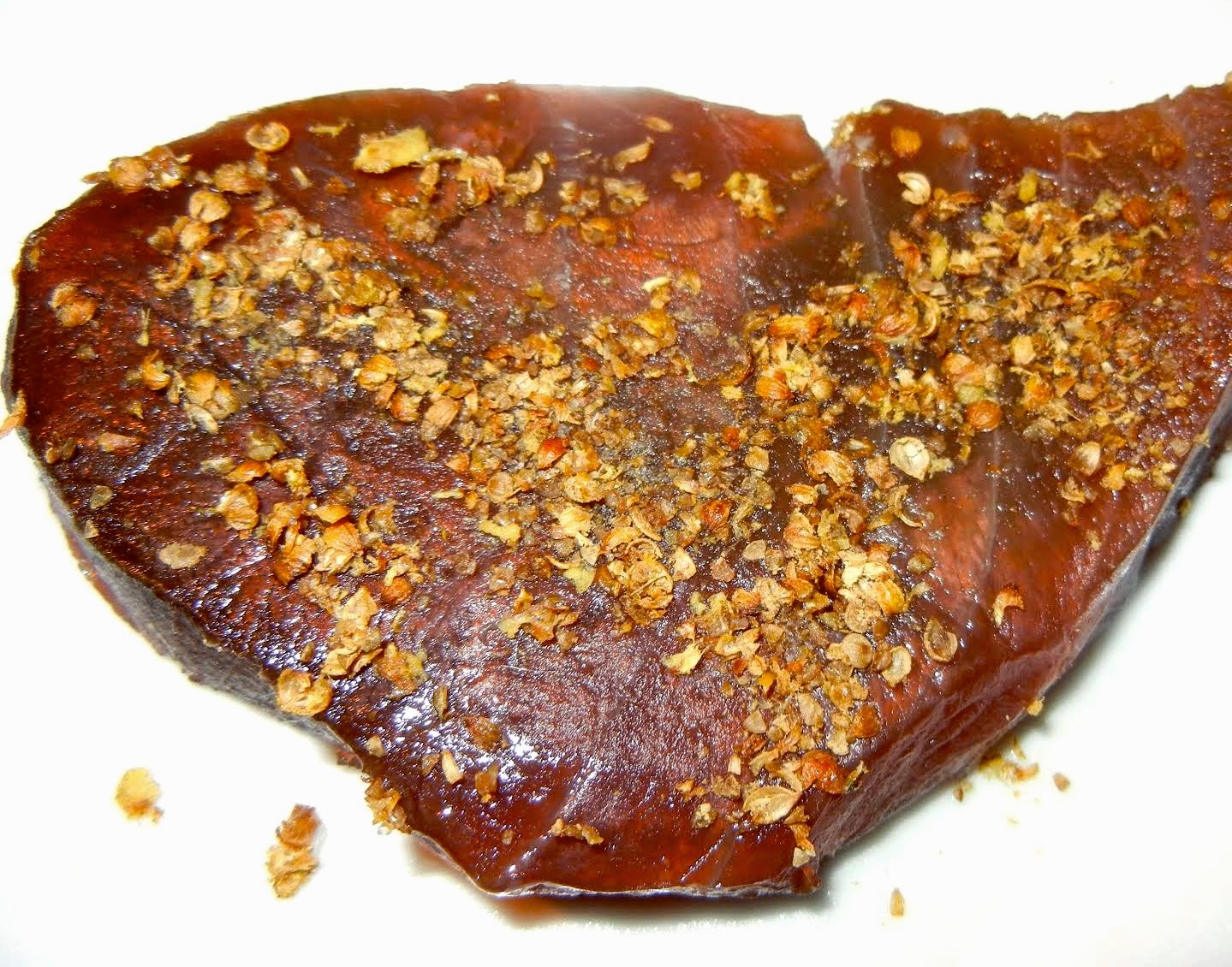 I bought one small piece of fresh tuna that I prepared with the spices,
but I have to admit that neither Jim nor I cared for the taste.  The
combination of the spices was okay, it was the tuna we did not like. 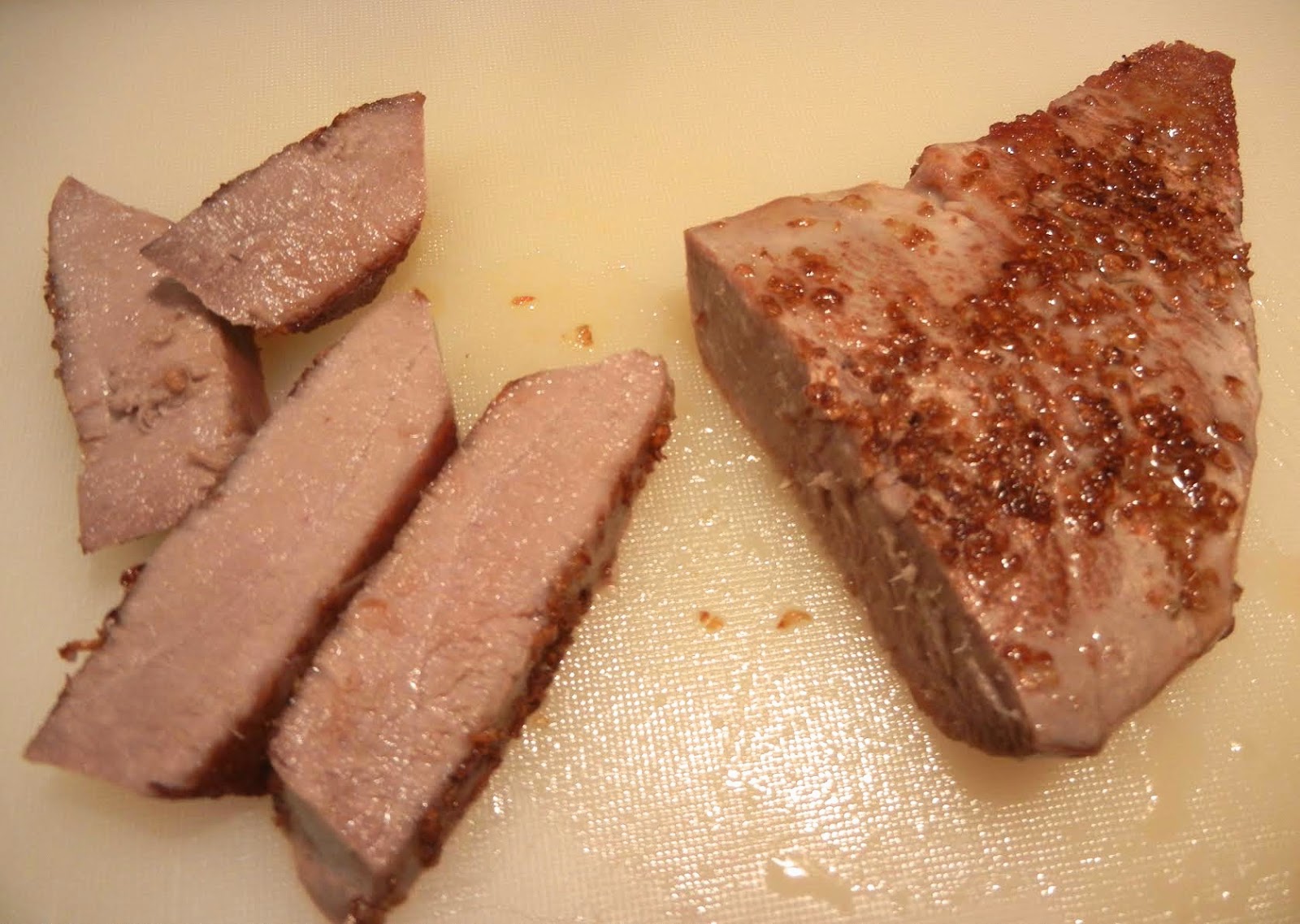 It is certainly a quick and easy recipe for a week night meal,
but it just didn't work for us.
Per Tricia~

My husband loves fresh tuna and often orders it out in restaurants,
so I was excited to make this recipe for him. I was also delighted
(for once) to be empty nesters as the pricey ingredients hit. My kids
have a tendency to like the expensive ingredients best.  Go figure. 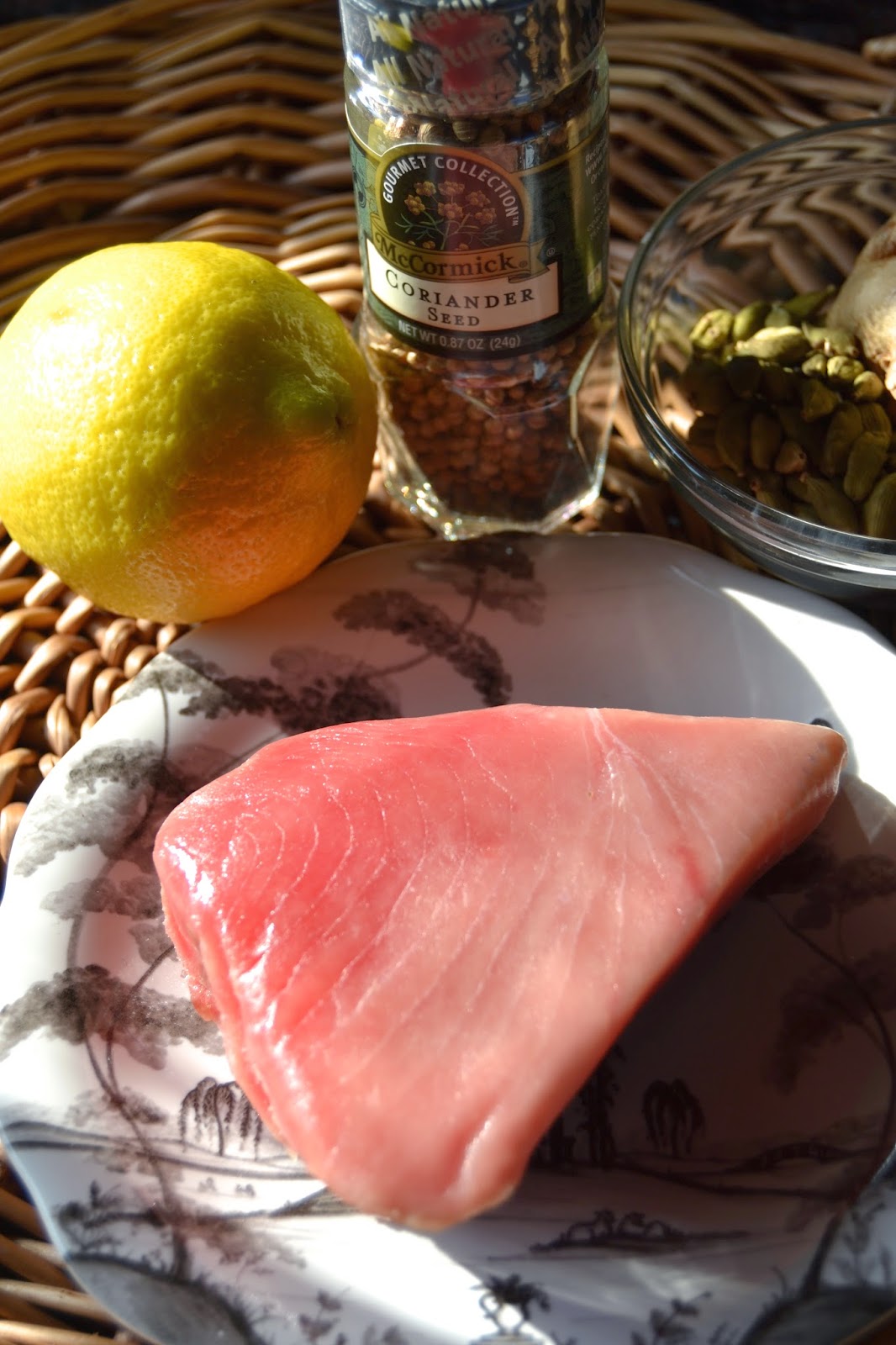 The recipe was a snap as it simply involved taking Dorie's suggested
spice combo and rubbing it onto the tuna prior to cooking it with a
touch of olive oil. I always do appreciate her suggested cooking
times because they are spot on. 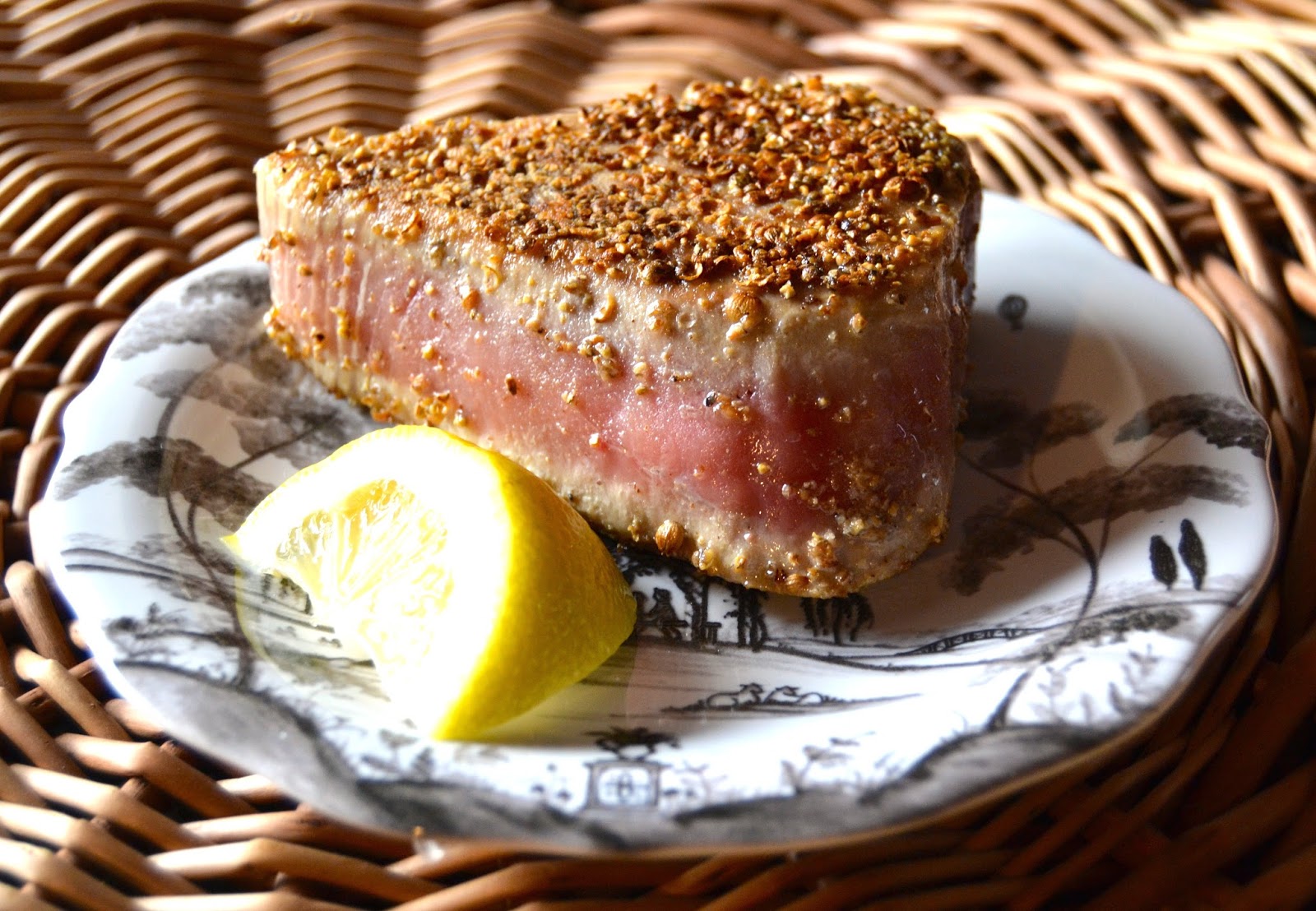 While my husband did enjoy the recipe he also explained that he likes
tuna so much that he prefers it prepared in a lighter manner.  He said
this reminded him of all the the "blackened" recipes that were found in
restaurants in the late '80's.  OK for chicken or catfish, but for him it
was too strong for tuna steak - especially at this price point :)

Arman's Caviar in Aspic
Per Nana~
Let me start by saying that Cher would love this interpretation of the recipe :)
I do not like aspic or jello (something about the texture just gets to me)
however I decided to make the recipe for the technique.
Jim does not do caviar, his loss, so I decided to change things up a little.
For the aspic I used a chicken flavored bouillon cube and topped it with
chopped chicken livers.  the aspic set up nicely in the refrigerator for a day
and I had no trouble removing it from the pan. It sliced beautifully.

I scooped a little circle out and filled it with the chicken livers.
The end result was quite elegant and Jim actually liked it.
Per Tricia~

Like many tasks that you approach with trepidation, I found myself happy
with the results in part simply because the task was over. I also learned
not to make aspic in my Cannelé pan.  The dish you see below is the one
"blob" that came out in a large enough hunk that it managed to survive.
Let's just say the cat loved this French Friday. 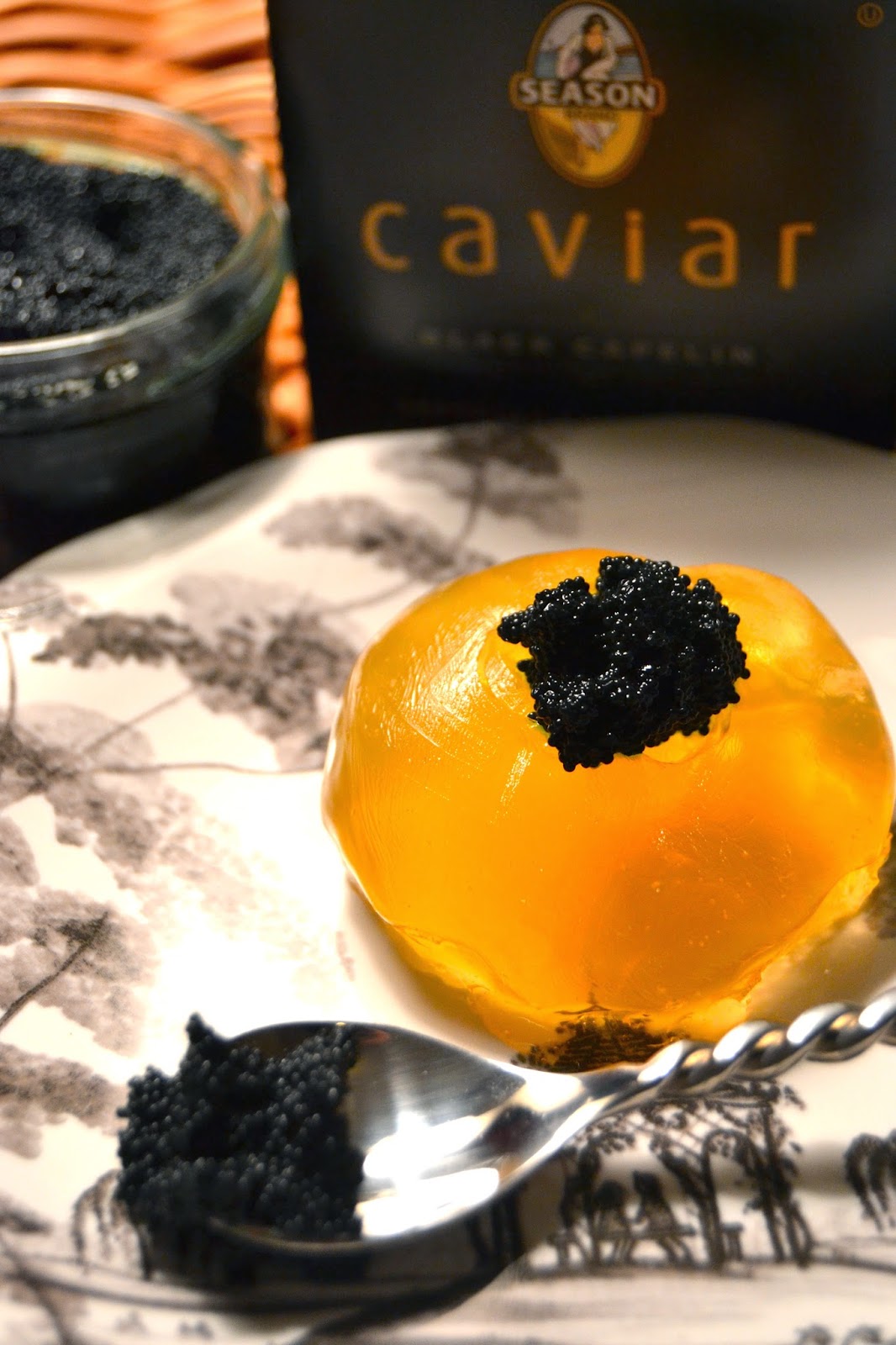 While mine was not exactly a high end caviar selection, it is still caviar.
Not a fan of fish to start with, this was an adventure - to say the least.
I am not planning to make it again, but it wasn't as bad as I thought it
would be either.  And I definitely would now try the "real caviar" if I
am lucky enough to encounter it at some fancy buffet.
Which is saying something. 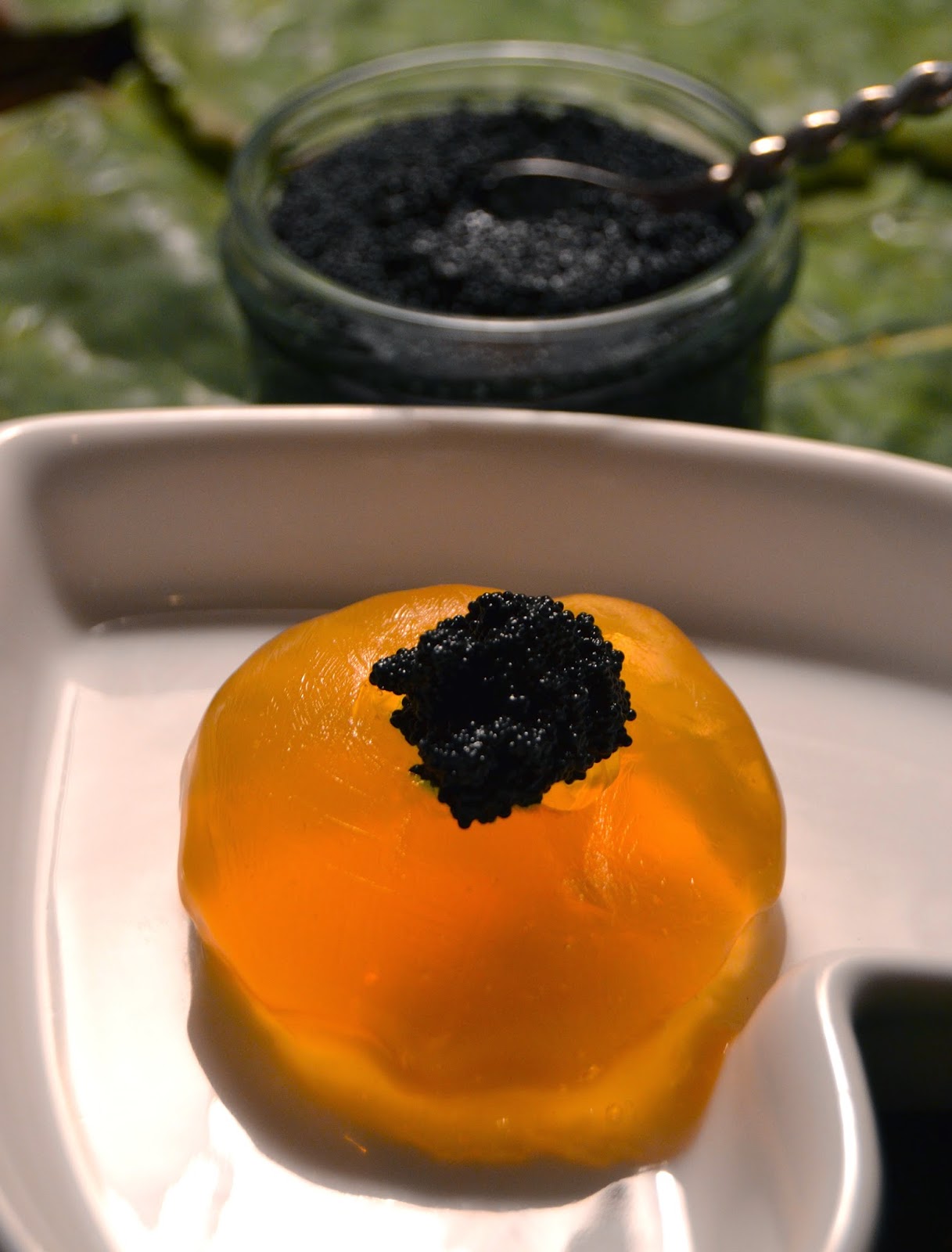 My fish loving husband was game for anything and thought this was quite
an interesting combo, but was not upset that so much aspic was lost in the
"Great Cannelé Failure" either :)  I did get a kick out of  reporting to the boys
that I was serving caviar at home now that they were both away at school...... 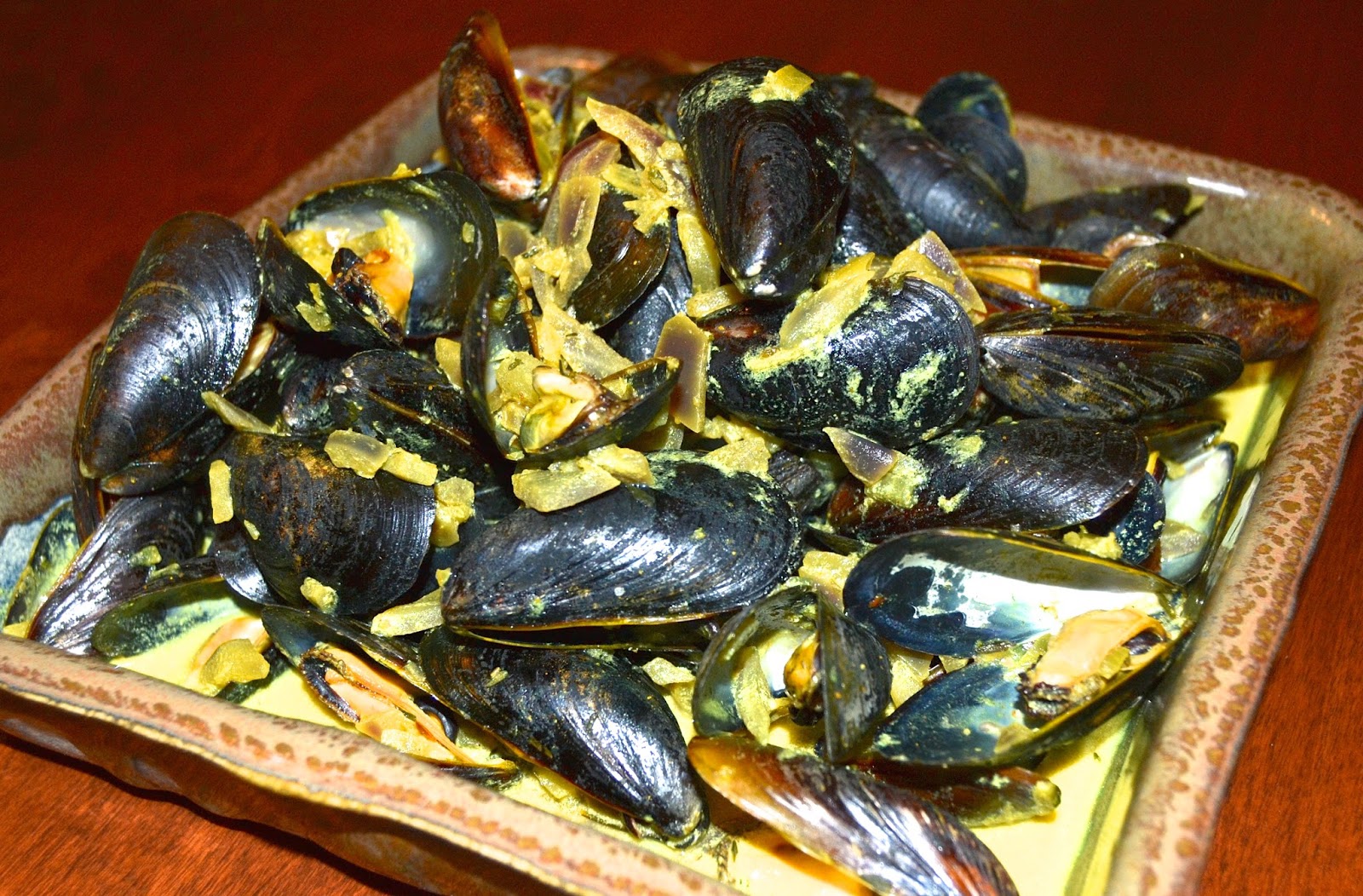 Per Nana~
Even though mussels are not a favorite in our house the recipe looked
so delicious that I could not pass it up.  So I substituted shrimp instead.
I prepared only half the recipe and used a pound of shrimp. 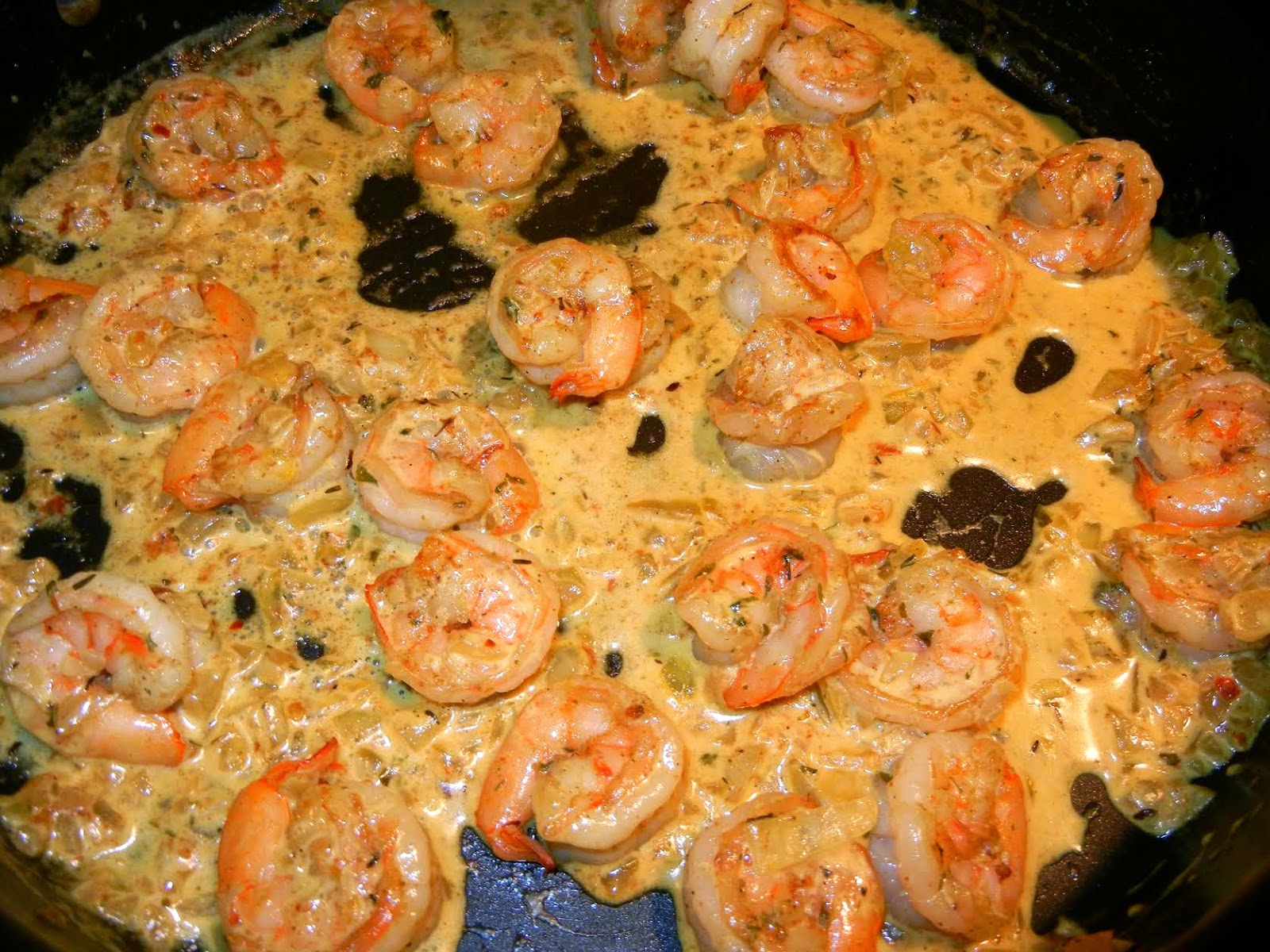 Unfortunately, cutting the recipe in half resulted in a small amount
of sauce. I did not strain it but instead left all the wonderful flavors
in there before adding the cream , and it was delicious. 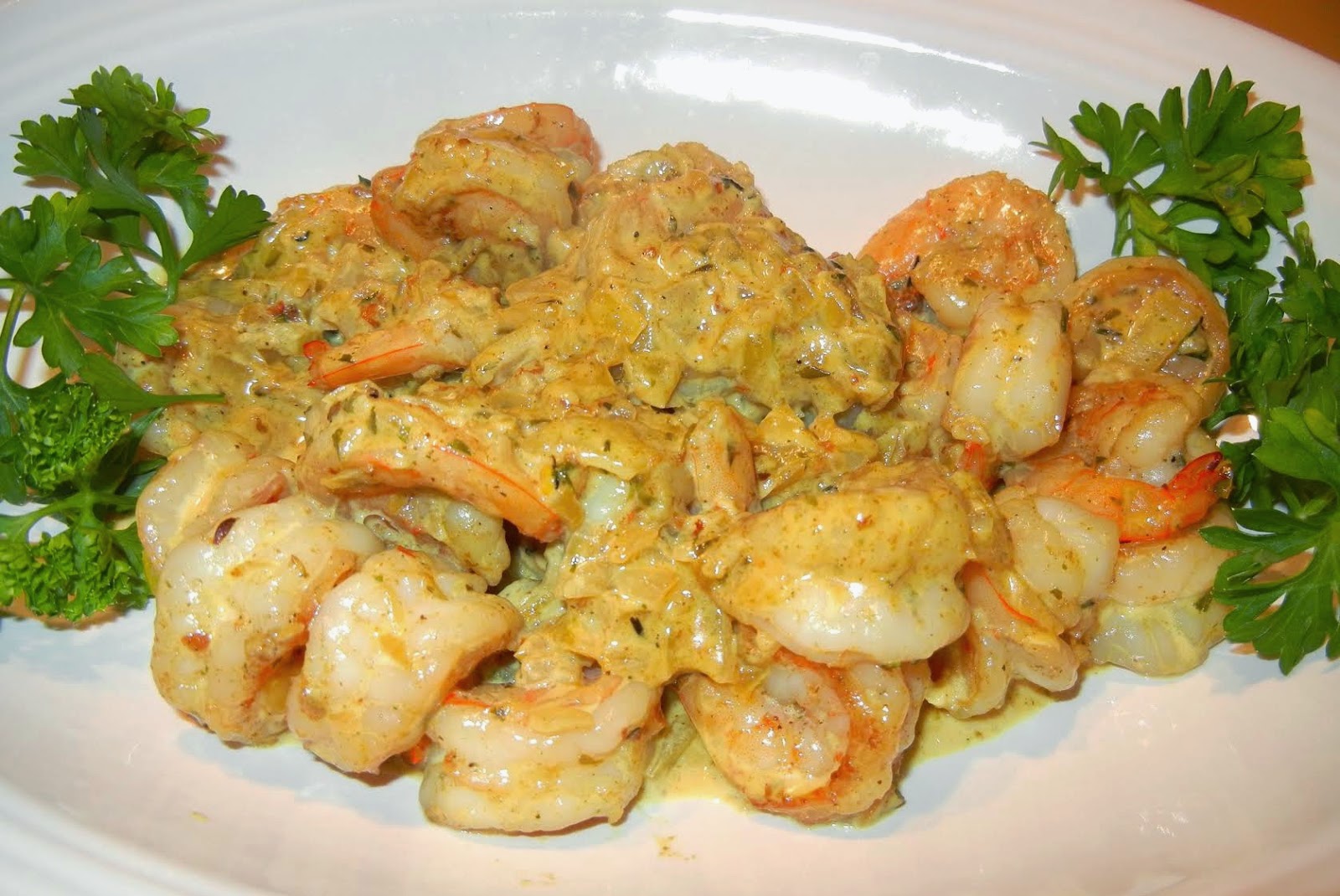 I served it with cooked rice but the next time I will prepare
the full recipe to ensure it is not too dry for the rice.
That said, it was a fantastic dish and will definitely be repeated.
Per Tricia~
My guys are big fans of mussels -while I can't manage to get one down. 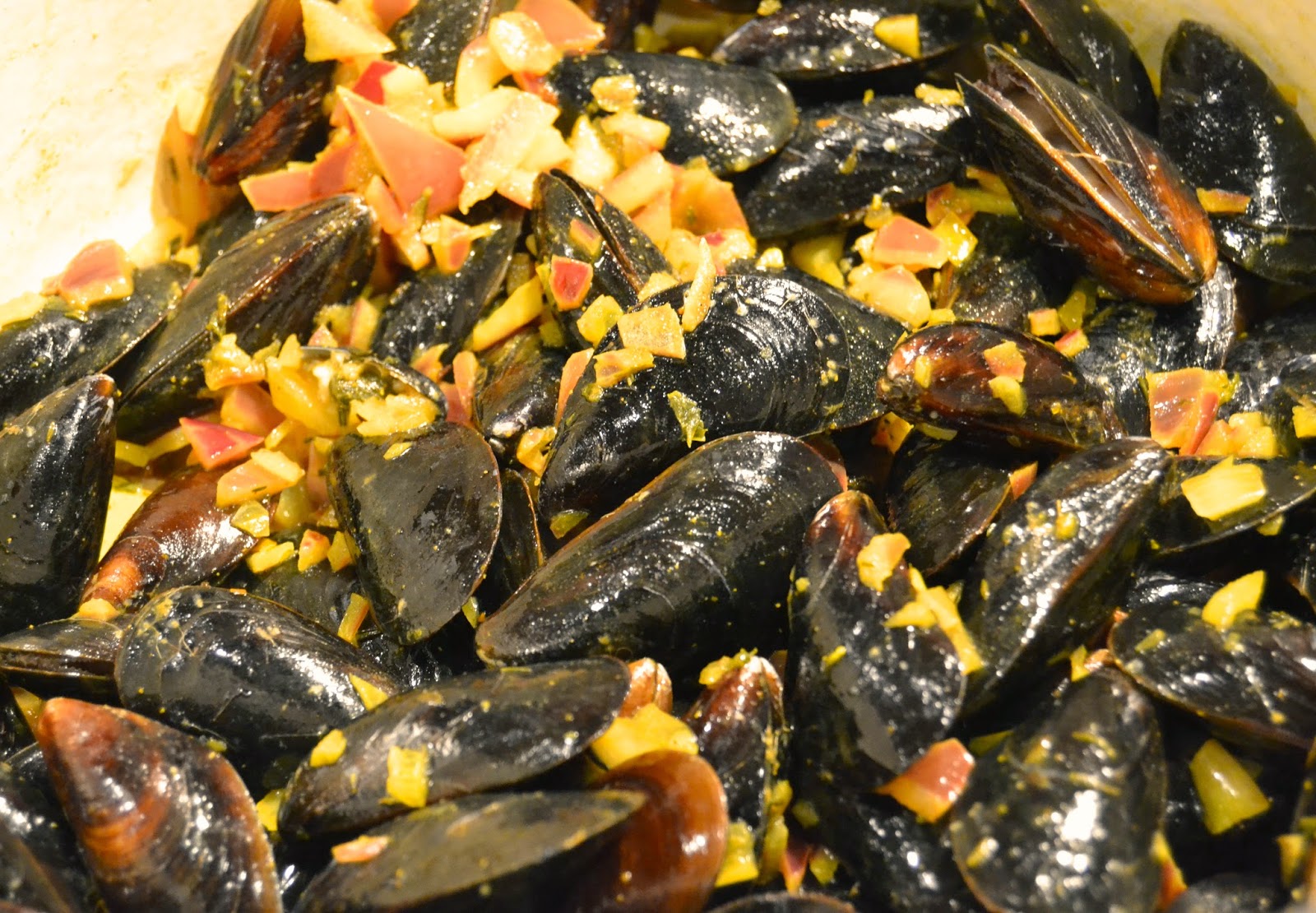 More for them and since there are few things I don't eat, I see no reason
to push the point :) But using curry to flavor them was a new one for us. 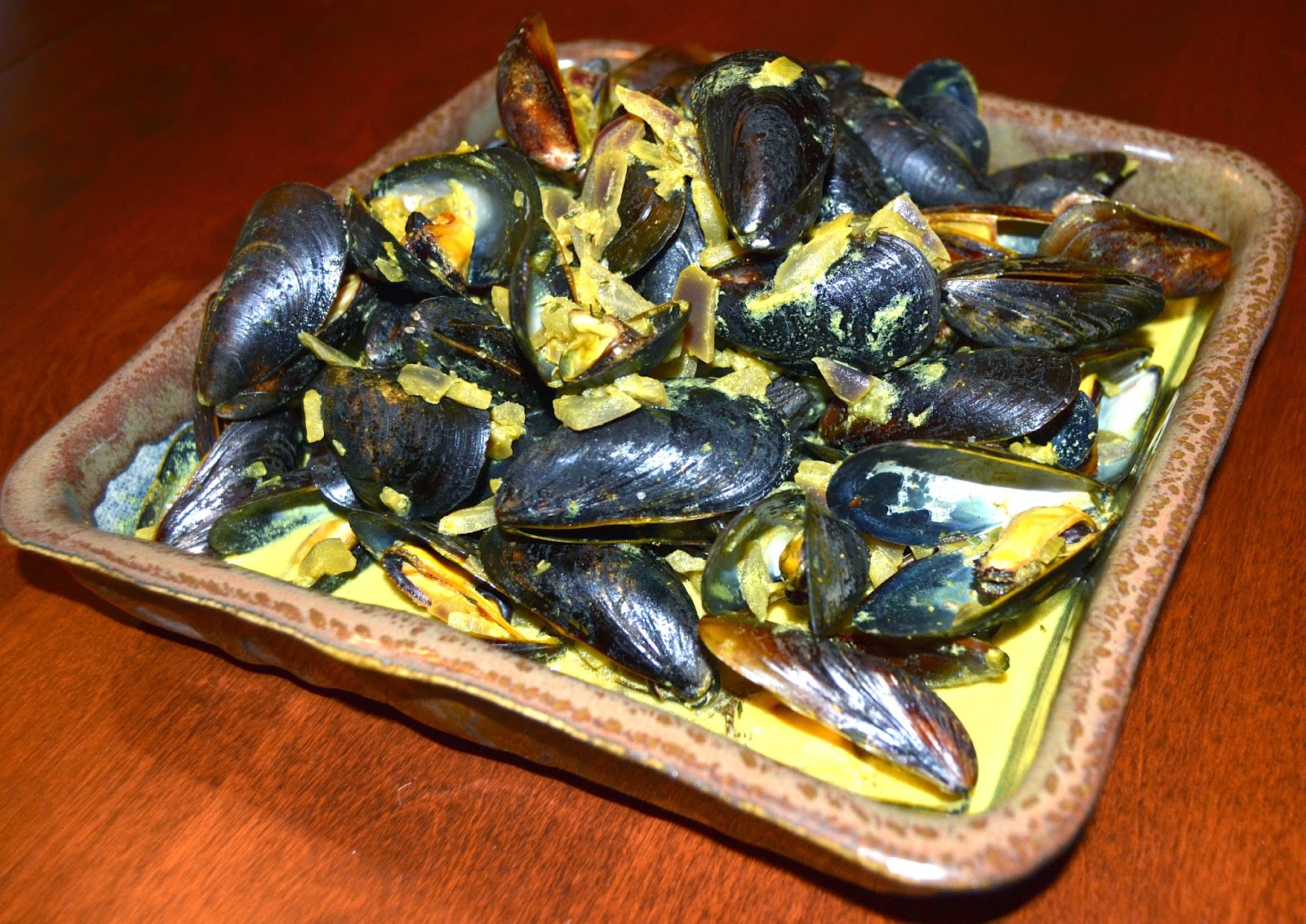 My taste testers reported that from the aroma they thought the curry
flavor would be very strong, but luckily it was not. It was definitely there,
but not at all overpowering.  And they really liked the cream sauce that
was added at the end. I look forward to circling back on this one with
shrimp next time so I can enjoy it too !
Posted by tricia s. at 3:51 AM 16 comments: 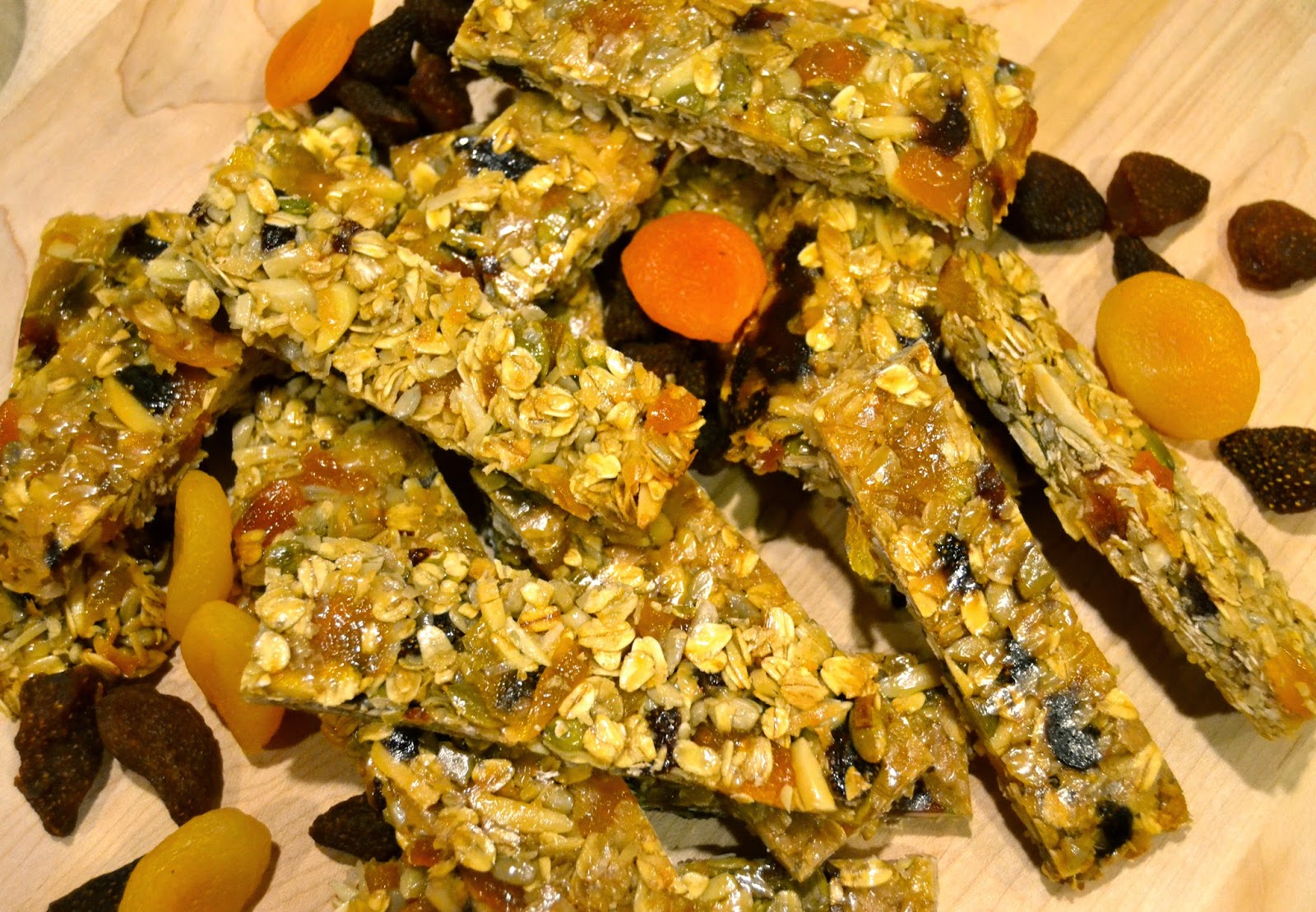 These granola bars are definitely better than store bought.
I was very excited to find a package of raw seeds containing
a combination of pumpkin and sunflower seeds only. 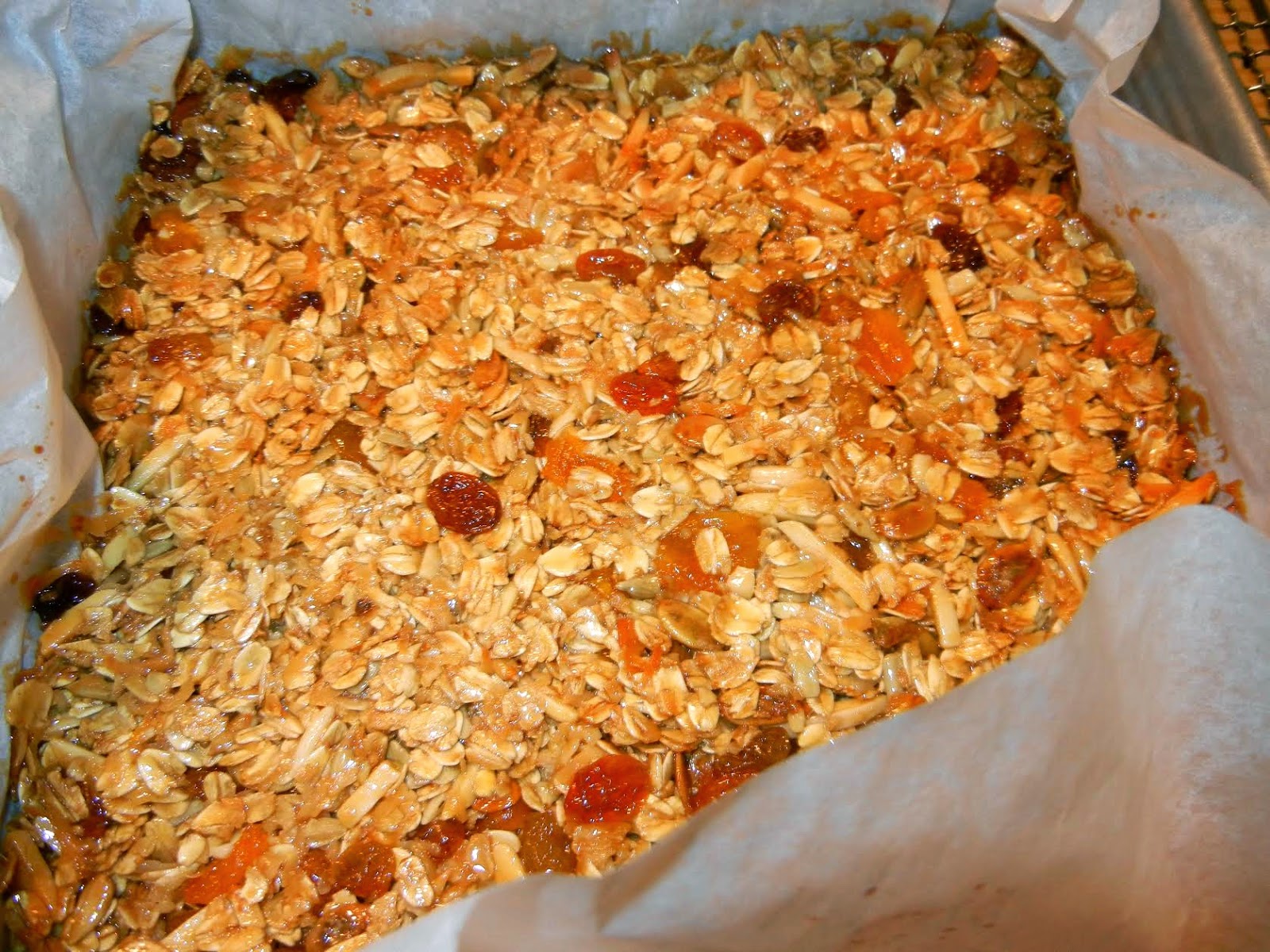 Some of the other packages had a variety of seeds, some of
which I had never heard of.  For the dried fruit I used golden raisins
and snipped apricots. Baking the oats with the slivered almonds and seeds
gave off such a delicious aroma that I knew this would be a winner. The
hardest part of the whole recipe was waiting the 3 hours for the
granola to set up, but it was well worth the wait. 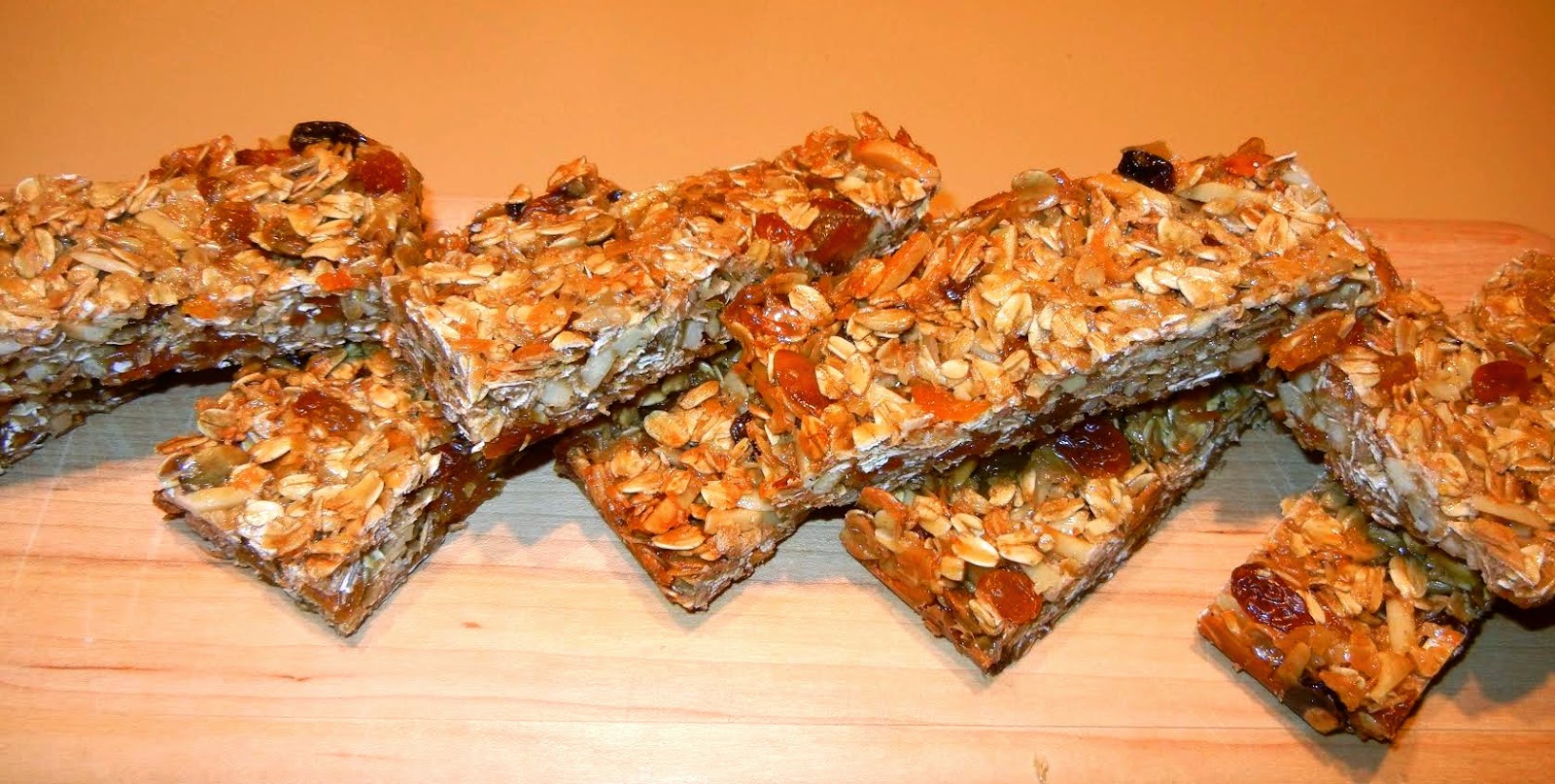 The bars are incredible.
Jim and I really enjoyed them.
Per Tricia~
I was tickled that I ended up with this recipe the week the boys went
back to college. Yes, they were packed right up - right after we tasted a couple.
They did not disappoint and frankly, I was tickled to find a recipe for these. 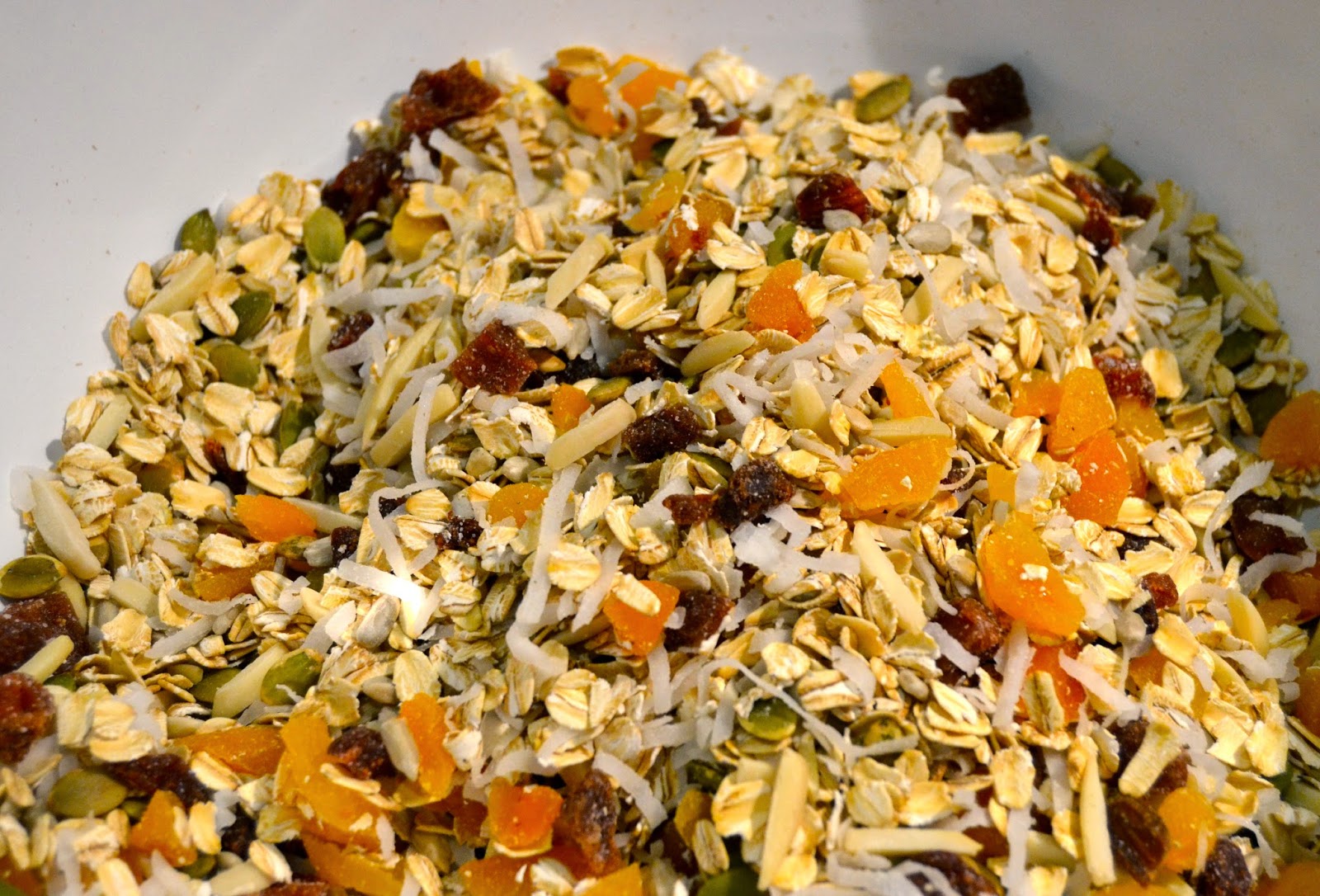 I had not thought to make them at home but they were truly a snap
to knock out. I also chuckled when I read Dorie's instructions to
"press down with authority" prior to cooling. I even read it out loud
to my husband, explaining that this is why I appreciate her
cookbooks so much. It is like having her right there along side. 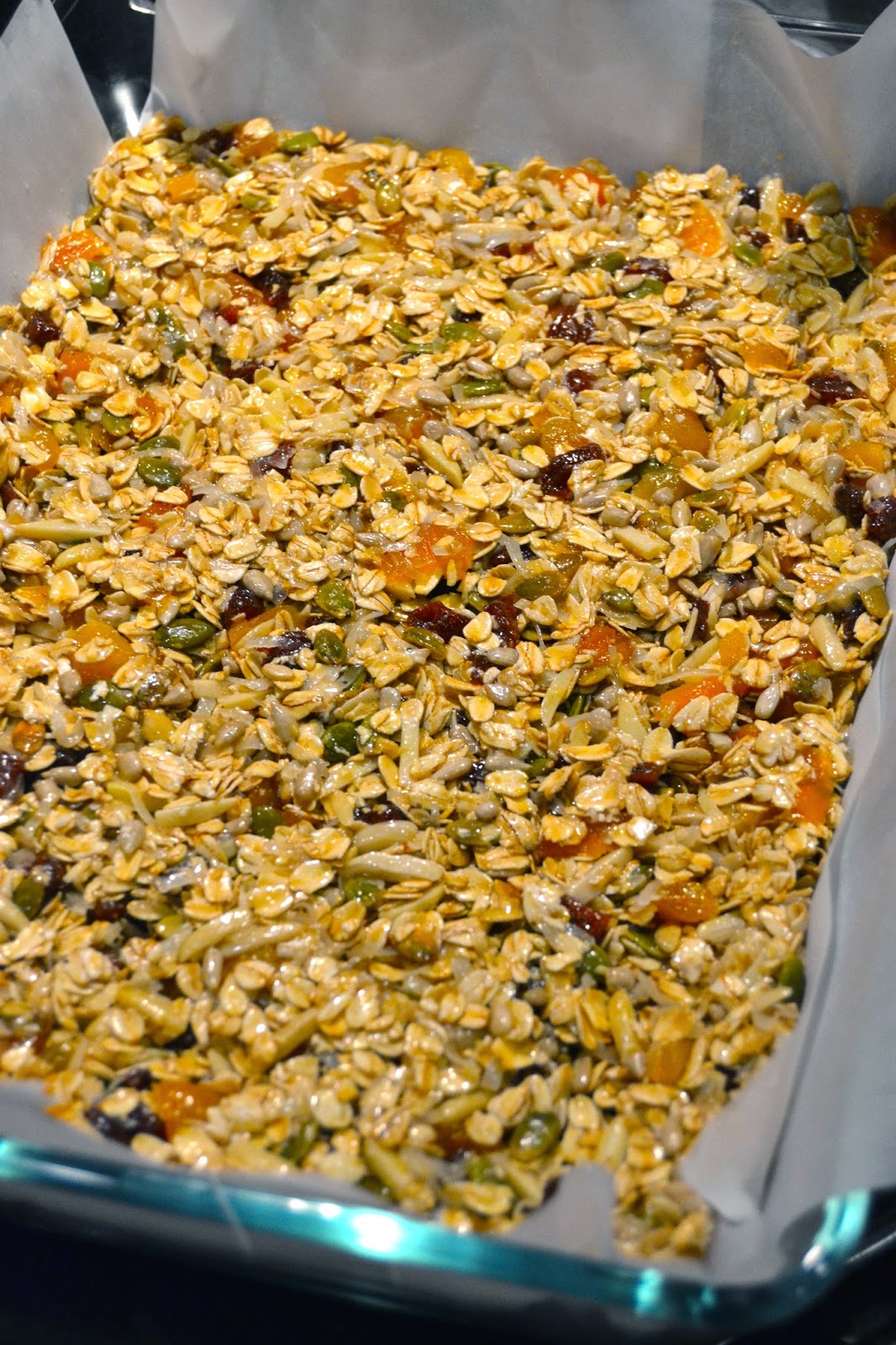 I selected dried strawberries and apricots for this first effort  but
also stockpiled dried blueberries and raisins in order to make some
more right away......yes, they are that good !
Posted by tricia s. at 4:51 PM 10 comments: