We are all caught up on the November recipes and taking the week off.

This week was Nana's turn to pick a November recipe and she selected the Pumpkin Gorgonzola Flan while Tricia went back to a missed October one to try the Gougeres.

Per Nana:   I found the pumpkin flavor much too bland and thought if I had used a can of the spiced pumpkin, as for pie, perhaps it would have had a more positive result.

(Before baking)
The recipe was very simple to make, and looked quite elegant when being served, but it wasn't to my taste and my hubby simply did not care for it. 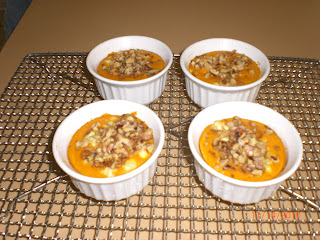 (all done)
I was surprised that Tricia liked it at all, since she is not a fan of Gorgonzola and was afraid to even try it.  Her husband was the real winner and liked it very much .....and we promptly awarded him the left overs." 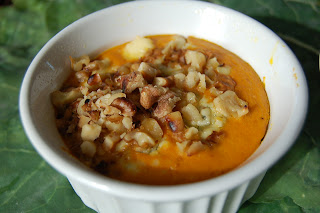 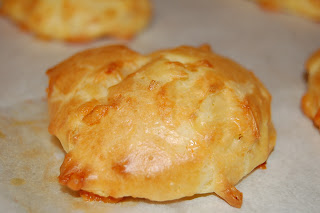 Per Tricia -
I thought I would love this recipe and it didn't disappoint.  I used Gruyere cheese which I am lucky to find in our local "Wegman's" and it comes in a thickly grated package in their specialty cheese area.  I have become quite familiar with this area of the store with the recent FFWD recipes ! 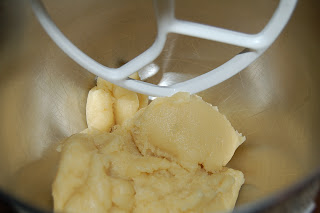 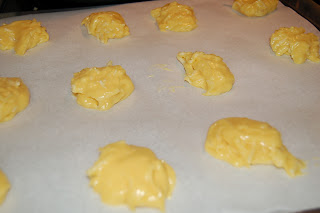 Easy as anything- the only potential problem....and I thought about it the minute I read the recipe....was that you preheat the oven but then have to remember to IMMEDIATELY lower the temperature again when you actually put the Gougeres in.  I wondered if I would forget and sure enough, I did for a few minutes.  They had a good 6 minutes before I panicked and opened the door to make sure it cooled down quickly and they still managed to come out looking beautiful. 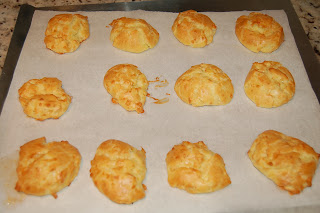 And the kitchen smelled fantastic, as usual with the FFWD recipes.  I loved them and will refrain from posting how many I ate in one sitting.  I did share them and took some (hot out of the oven) next door for Nana and Grandpa to taste test.  They were in agreement that these were simply lovely.
Next time we definitely have to coordinate drinks with these- they are made for it, as indicated by Dorie in the book.  Another winner !
Posted by tricia s. at 6:00 PM 3 comments:

Nana and I decided to enjoy the recipes this month by not only doing the selected November ones, but taking turns to catch up on the earlier October ones we had missed.  This week I cooked the Chicken dish while Nana tried out the mustard tart as an accompanyment.  Not only is she my mother (and "Nana" to the my kids) but she is also my neighbor...so testing recipes together and enjoying meals together is a great treat.

Per Nana -"SINCE YOU ARE DOING THE CHICKEN FOR THIS WEEK, I THOUGHT I WOULD GIVE YOU AN EXTRA TREAT TO GO WITH IT.

I WENT BACK TO LAST MONTH'S RECIPES AND TRIED MAKING GERARD'S MUSTARD TART.
I PREPARED THE TART DOUGH EARLY THIS MORNING AND REFRIGERATED IT FOR THE 3 HOURS CALLED FOR.   I DO NOT THINK THIS IS TOO GOOD AN IDEA BECAUSE I HAD SUCH DIFFICULTY ROLLING IT OUT.
HOWEVER, I HAVE LEARNED TO PATCH ANY TART CRUST WITH THE BEST OF THEM.

I THEN STEAMED THE VEGETABLES, MAKESHIFT STEAMER,  USING A STRAINER OVER BOILING WATER IN A SAUCEPAN. WORKED WONDERFULLY.  I GUESS WE DON'T HAVE TO RUN TO SUR LA TABLE AFTER ALL.  DARN.
PREPARED THE EGG AND CREAM MIXTURE WITH ALL THE MUSTARDS ETC. AND POURED INTO TART.

THE TART BAKED PERFECTLY, AND IF IT TASTES AS GOOD AS IT SMELLS, WE ARE ALL GOING TO HAVE A LOVELY DINNER.

(Tricia's comment- it was fantastic. The best recipe yet. Nana used a beautiful square tart pan and we both agreed that cutting 1 1/2 inch squares of the tart made a beautiful and delicious appetizer. I love mustard but I still can not believe how much I enjoyed this tart. And it was gorgeous too !!)
Tricia's try at :    "Chicken For Les Paresseux "   (lazy people):

This was as easy as it sounds and the recipe info about not having to wash the chicken was interesting. My hubby did the shopping since I am fighting a cold (and I am lazy, so this recipe is a dream.....) and got the organic bird at Costco but picked up the veggies at the local grocery store.  He was not sure about "baby potatoes" and picked up a small one and half pound plastic container of "Gourmet Red Creamers".  They were smallish round red potaotes and they were delish.  I used the bag of carrots rather than the few asked for in the recipe (small bag of "not baby" carrots...think it was a pound).  Substituted dry spices for the fresh ones and used the water as opposed to wine. If I had the wine, it would have gone in !

The only shopping snafu was that I wrote "shallots" and hubby came back with scallions.  I decided to cut the greens for later use and use the hunk at the bottom for roasting and to be removed before eating.  Also I got French baguettes and though I figured it was not necessarily the way to do it - I cut two large hunks to stick under the chicken.  Not sure if too tall, but I thought I would give it a try.  I have cooked many a roast chicken, but this was spectacular.  I almost can't believe how good it was since it was such a simple recipe. And that bread trick ?  Ridiculously good.  Mine did get a bit soggy on top (hubby like it anyway) so I pulled off the soggy part and shared the crispy baguette bottoms with the family.  Deliriously good and I was truly cautious of how this was going to work.
Salad and Gerard's Mustard tart, and this was a keeper menu !!
Posted by tricia s. at 6:40 PM 5 comments:

This was an easy recipe and I eagerly anticipated what I thought would be "no fail" results.  That said, I was surprised when I tasted the completed dish and found it to be quite bland and disappointing.  I had looked forward to the richness of the cream and Gruyere, and the seasonings sounded like they would do the trick.  But alas, they did not - in my book at least.  I will definitely not be making this one again but rather than disappointment I am mostly shocked that this dish turned out so differently from what I expected.  And from the heavenly aromas created while I baked it......


I used the exact ingredients listed- forgeoing the potatoes in the pantry and stopping by Wegman's to pick up Idaho Russet and the shredded Gruyere.  I used 5 potoatoes out of the 9 included in the 5 pound bag, and this was probably the first mistake.  The original extra heavy 10" pie plate had the potatoes heaped up in such a mound that I had to switch to a larger oval baker instead or the top half of the potatoes would not touching cream.

The oval baker was 10 x 14 and I had to add quite a bit of half and half to add liquid that could be visible at all.  I was sorry I did not measure how much extra I added - but I was "winging it" to get it just barely visible to the eye.

I baked for 45 minutes and then went the extra 15 - at which point the house smelled fantastic and the dish looked amazing.  I let it cool for 15 minutes or so and then cut a small piece.  I was surprised by the large amount of liquid that had not been absorbed.  Under the top coating of the cheese it was simply like layered potatoes in milk....not what the ingredients were.

In all fairness, this looked even better than the picture in person. And it smelled divine...

soup-y bottom
Although this one fell flat for me, I shared with Nana and she had a more positive review of the dish. She also acknowledged the background of the recipe and said that it was intended to be an accompanyment rather than a distraction, and she felt it delivered in that area.

We both noted the wonderful Cauliflower-Bacon Gratin on the next page of the book and that looked so mouthwatering that I bought the ingredients for that at the same Wegman's trip :)  Will post when I get it done.
Posted by tricia s. at 5:57 PM 2 comments:

We had just figured out how the whole FFWD worked and our 2nd week threw us a curve.  Instead of a specific recipe, we could now decide which of the November selections to do in which order.
Nana is as organized as ever and jumped in with the challenging dessert recipe that involved ingredients which necessitated a trip to the grocery store.  She even scored extra credit points by trying a wonderful "David Lebovitz" Swiss Chard tart....see below.
I (Tricia) decided to keep things simple and go with the pototo dish, in part because my husband is traveling and would be so disappointed to miss out on the cake.   So this week will have two posts so that we can link our results to the appropriate FFWD recipes.

This was very simple to make, takes very little time after everything has been prepped.

The flavor is quite good,  As you know I dislike raisins, however I think about 1/2 the amount called for would be sufficient.

I tasted the cake while warm, and look forward to trying it chilled.  I also think a dollop of Whipped cream or creme fraiche would be excellent.  It would give it that little bit of "je ne sais quoi".

(Tricia's note:  Nana shared some with me the "day after" and I enjoyed it at room temperature.  It was absolutely wonderful my sweet tooth really enjoyed it.)