Also known as "lamb stew with spring vegetables".  A winner in our kitchens
and with our spring temperatures going from outright sweltering back down to
downright chilly - stew was a welcome meal. 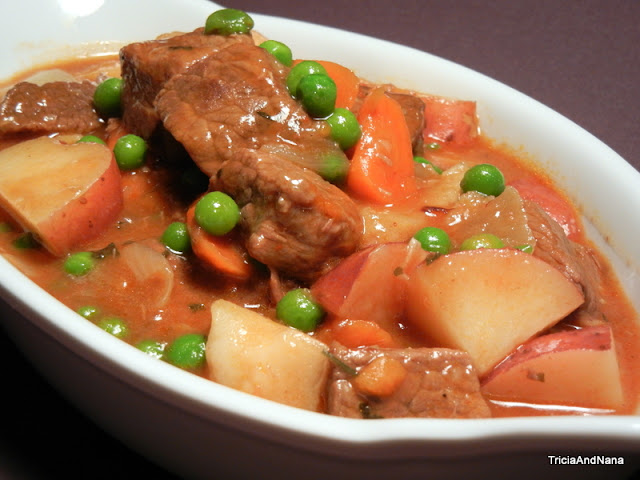 
What do you call navarin printanier if you do not use lamb?  Beef stew?

I spent a better part of this week searching for lamb to no avail.
The only piece I came across was at Wegman's and that was
a leg of lamb. At the price they were asking, I certainly did not intend
to make it into stew.  I can be very frugal sometimes (okay, call me cheap)
but  since hubby and I are not big lamb eaters, I couldn't do it.
Lamb chops, well now, that's another story. 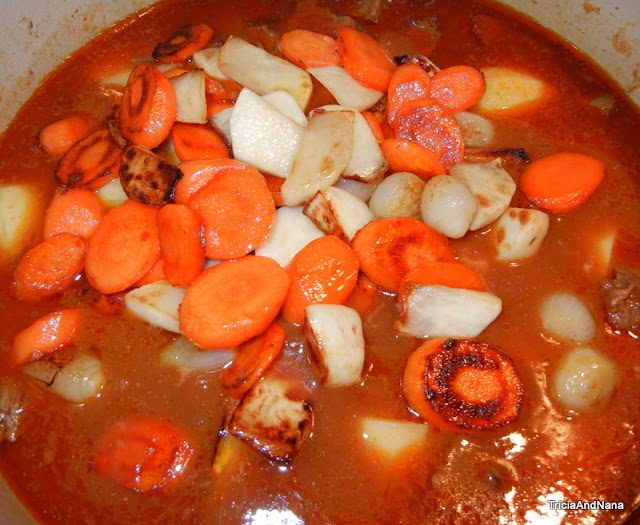 Wegman's has the cutest 1" potatoes that I used, as well as the
tiny white onions.  I have never cooked with these onions before and
they are really nice, not too strong.  I was a bit apprehensive about
using that much garlic with the onions, but it all melted away.

One thing I especially liked about this "stew" was the way the vegetables
were prepared.  I think giving them some color before adding to the meat
makes a huge difference in flavor. The recipe calls for a lot of prep work,
and having used so many dishes, I was wondering if it was worth the effort. 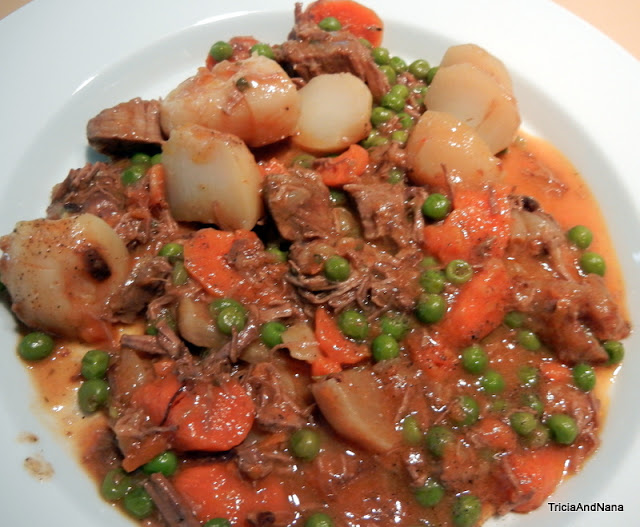 Trust me, it was.
This was one of the best stews I have ever made, and I make a
pretty good boeuf bourguignon.  (at least that's what hubby said).

I hope someday I will be able to find a good piece of lamb to try this again.
I am anxious to see the results of all the other Doristas, and if they
were able to find some nice lamb to make this dish properly.

Nana had already taken the pressure off when she decided to go with beef.
Me and my wallet willingly joined her, acknowledging that it would have
been even better, and certainly more "Spring" like ....had I used the lamb. 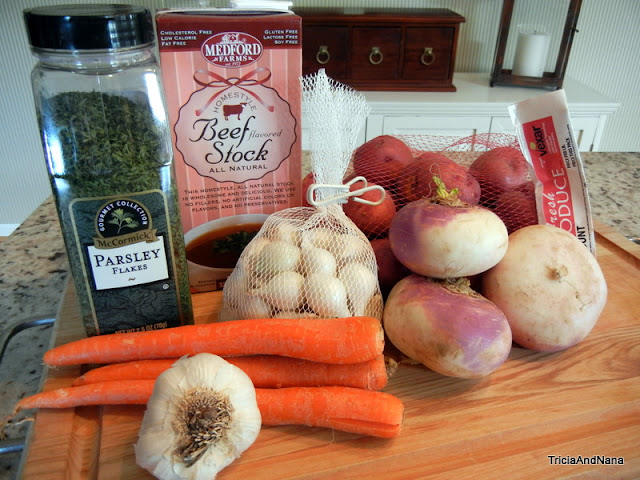 But a lovely stew it was nonetheless.......even after
I forgot to add the peas until the first bowl had been served :)
I should have known when I took the photo of the ingredients that I
would forget to add them at the end.  While this was no mean a difficult recipe,
by the time I had all the items chopped, browned in sugar and combined
with the meat...I had felt quite "done".  Serving it up I pondered again
what made this a Spring dish (yes, the lack of lamb did not help)
and realized I still had the peas to add in.  Even worse was that Nana
actually dropped off the peas for me as she had picked up an extra box.
Next time I will simply ask her to stick around to make
sure the ingredients make it in......... 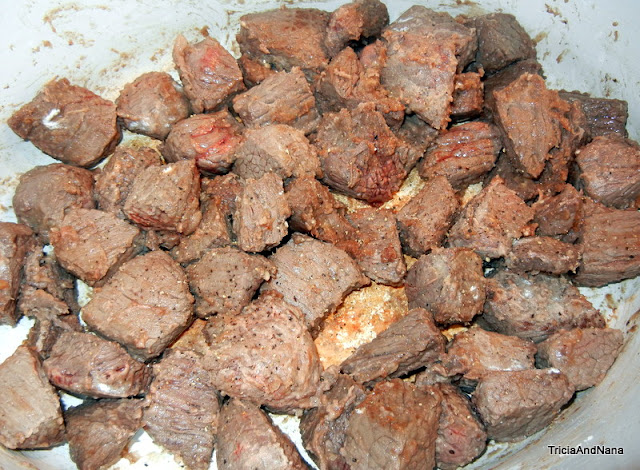 The onions were fun- believe  it or not I do not recall actually ever
cooking  tiny onions like this. And definitely not in this manner. Exactly
as Dorie described,  their skin came away after being blanched.
They were a wonderful surprise addition.  The other addition
that I am not used to, but did not yield a "surprise"  was adding
the sugar when I cooked the veggies.  No shock that it made
everything taste better.  I felt slightly less guilty since
Dorie "directed me" to do it :) 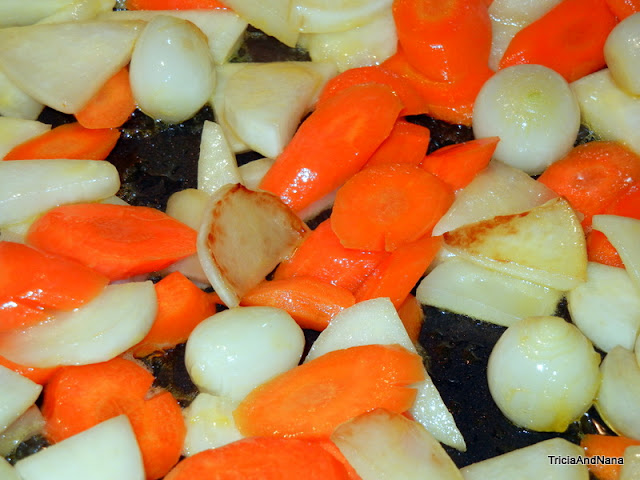 My guys thoroughly enjoyed this one.  My younger son initially thought it
was a bit on the bland side and by the time  he finished his second large bowl
had uttered the phrase "I take it back..... I take it back" about a half dozen times.
My husband also made it quite clear that he would be more than happy to
see this come across the table again - in any season.
Posted by tricia s. at 5:11 PM 26 comments:

Nana came through and tested this fun recipe....... while Tricia and family only " taste" tested the results this week.  Yum ! 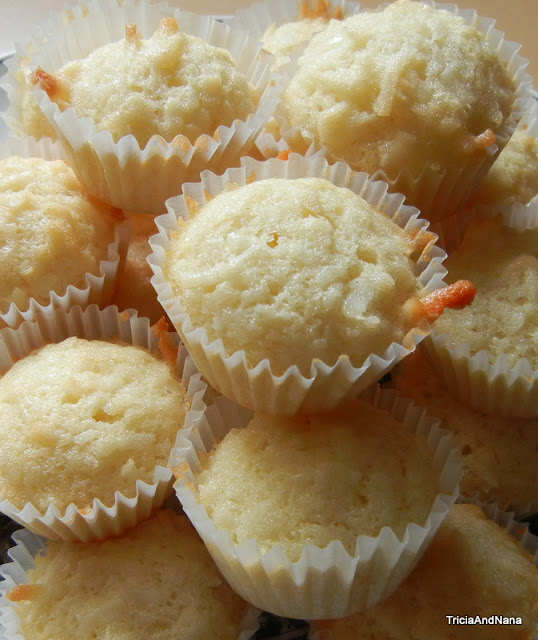 
This is such a simple recipe to make.
If you have coconut on hand, adding the rest of the basic ingredients is a snap.
A wonderful  dessert to make if someone calls to drop in for a quick visit. 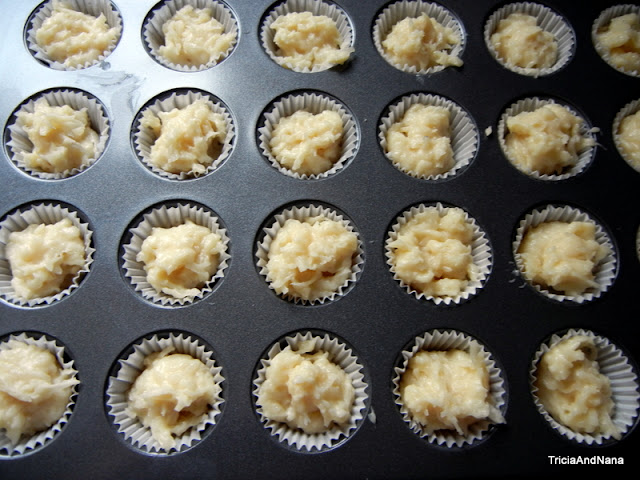 Since I had only sweetened coconut in the house I
reduced the amount of sugar called for in the recipe and
my friands were not too sweet at all.
I baked them for about 22 minutes and they turned out lovely.
The next time I prepare this recipe I would like to try some of
the additions that Dorie mentions in her bonne idee. 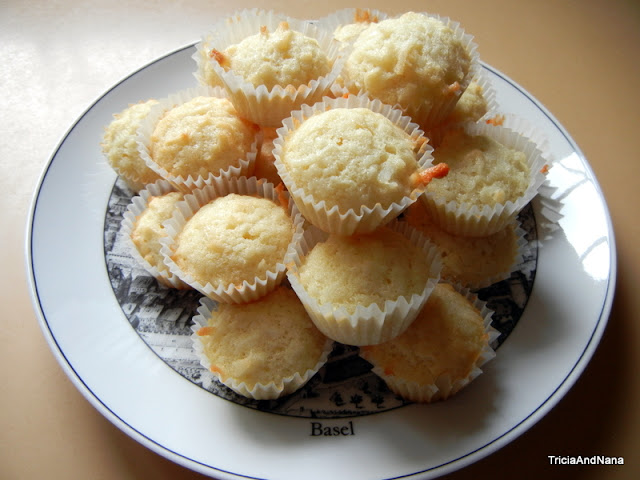 All in all, this is a great recipe and hubby and I enjoyed them.
Per Tricia:
My contribution, in addition to taste testing duties, will be to
share a story about Nana's "Basel" plate in the above photo.
I too have a matching plate from the same store in Basel, Switzerland
purchased at the same time.  It was 20 years ago and  I joined both parents
on a trip to France where we focused mainly on the Alsatian
Rue de Vin (the wine road).  We enjoyed a magnificent trip through
the wine country, consuming enough  Choucroute to last a lifetime.
We did not tire of it and washing it down with the local Riesling
and Gewurztraminer certainly helped.  One day we decided to cross
border and investigate the nearby "big city" of Basel, Switzerland.
We had a lovely time  exploring the town, but when we returned
to the parking garage we found we needed Swiss coins to pay the meter !
Shops were now closing so we tried to find anything we could
buy in order to receive the precious Swiss currency.  A local
antique and decor shop accommodated us and we each bought a plate.
This was "pre-Euro" and life has gotten much easier since then.
A special souvenir for sure, perfect for getting back into France
or for serving Coconut Friands :)
Happy French Friday ~
Posted by tricia s. at 8:42 PM 30 comments:

This one is near the top of the list of "recipes we would never have tried, were it not for "French Fridays with Dorie". 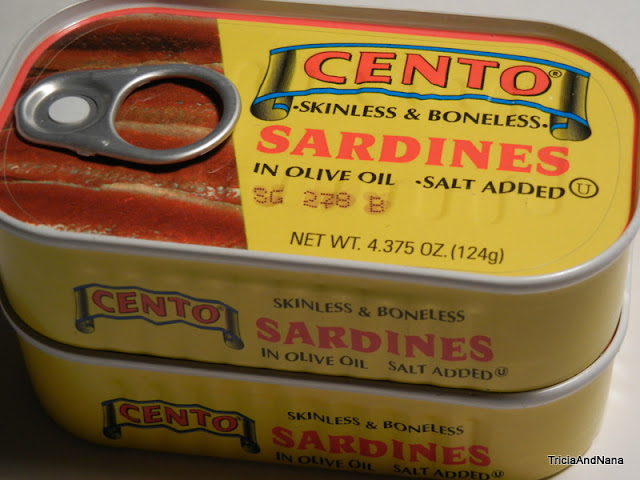 This recipe brought back a lot of memories of the 70's and 80's.
Many a Saturday evening with friends consisted of a pitcher of
Martinis or Scotch sours, with various homemade spreads or dips.
I often made a spread of sardines, chopped egg and mayo, or chopped
clams with cream cheese on small rye bread,that I ran under the broiler.
One of the first dips I learned to make was a package of Lipton's  onion
soup mix with sour cream. Times have changed a bit,
now I use Knorr's vegetable soup for the dip. Don't laugh,
they are still tasty combinations today. 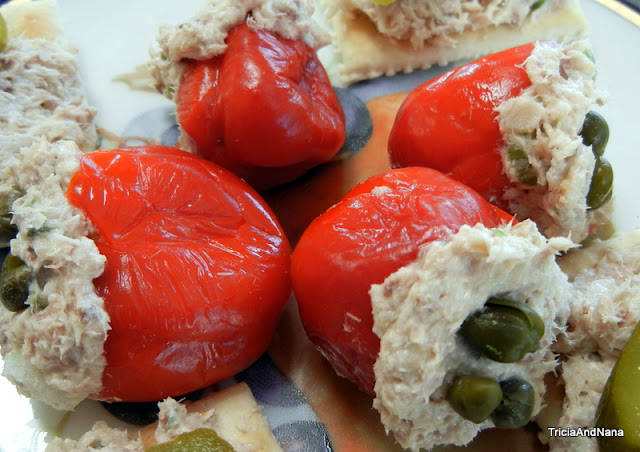 I love the ingredients added to the cream cheese in this recipe,
they give it quite a  flavor.  I decided to stuff a few peppadew
with the mixture, topped with some capers.  Hubby loved that,
he is a great fan of peppadews, and since I am not, I used some
saltine  crackers with slices of petite pickles. 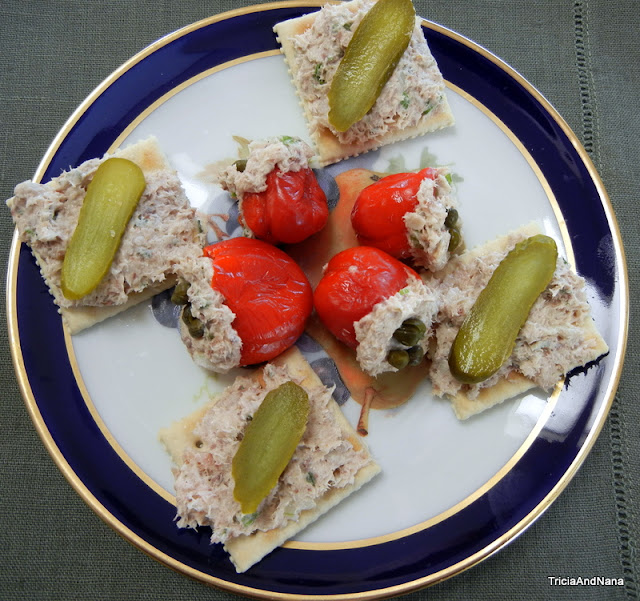 This spread is also great on sliced toast, and as I made the full recipe
of two cans of sardines, I think that will be lunch for a couple of days.
Per Tricia:
To say that there was a bit of apprehension about this one would be
an understatement.  I had no desire to try anchovies but I try not to let
this come into play when it is "French Friday".   Plus, I was trying to keep
my bias off the radar so that my taste testers would not be swayed. 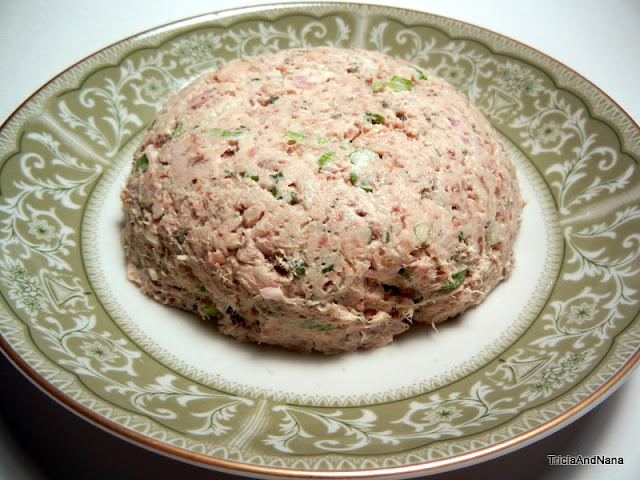 I was initially quite surprised when I opened the sardine can and found
something that looked more like large pieces of tuna than "sardines".
This was actually the first time I ever cracked open a can and I was
expecting teeny little silvery fish to be inside.  Since my tin consisted
of boneless and skinless sardines packed in oil, it definitely resembled
tuna in my book.  Phew.  Only hubby was on hand to test the recipe before
the post and we both concurred that it was nice - like tuna with a "kick". 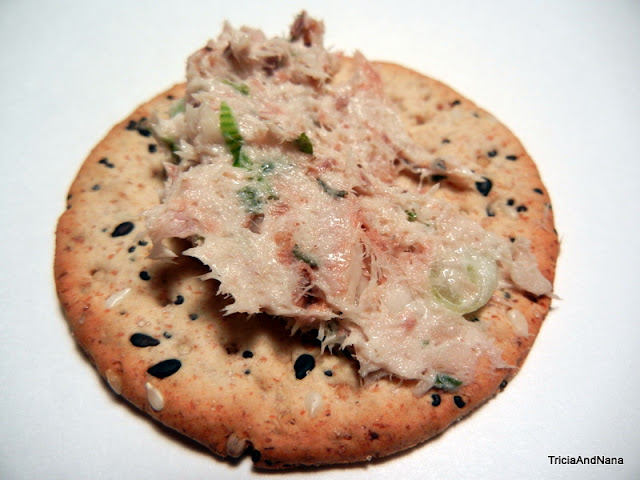 In full disclosure I am not a huge seafood fan.  I thought
I was bound to dislike the result - at best.   But it was definitely way
better than I ever dreamed and my husband "officially" liked it.
Regardless - it was a fun adventure and Dorie once again took me
happily out of my comfort zone.  As usual.  Happy French Friday.
Posted by tricia s. at 7:57 PM 21 comments:

A perfect and easy dish- we will be adding this to our Easter meal ! 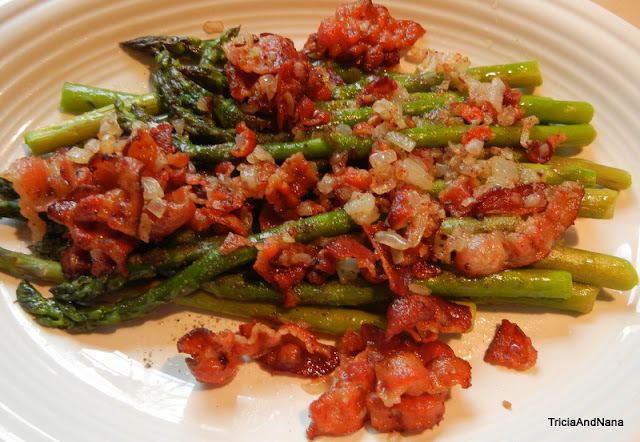 I was not too excited about this recipe when I first read it,
but surprisingly, it fooled me. Using the bacon with warmed
onions  as a topping really kicked it up a notch.
I will admit I did not use the hazelnut oil or the lemon juice,
simply because I had neither in the house at the time.  I did use
EVOO (as Rachel Ray says), along with wine vinegar. 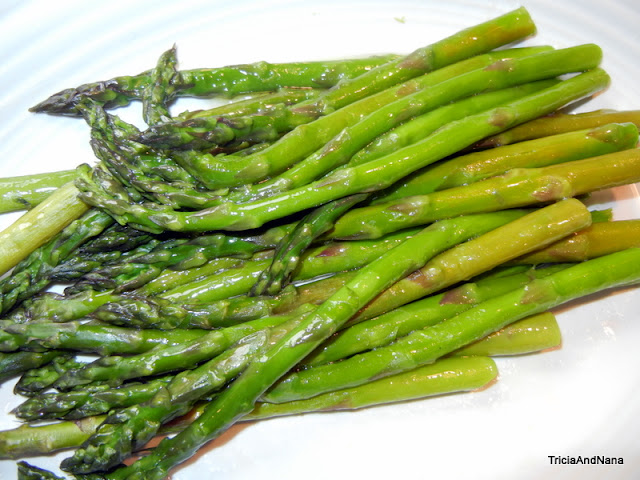 I thought the combination was very good, but I will try
the recipe again with the hazelnut and lemon.
It is a pleasant change for asparagus, as we usually cover
this spring vegetable with hollandaise sauce.
I do plan to make this for Easter dinner to accompany
a Smithfield Ham and roast potatoes.
Happy Easter to all ~

Per Tricia:
Nice and easy and very "spring-like".
Any recipe that involves bacon  and onions is going
to be a hit in my house and this was no exception. 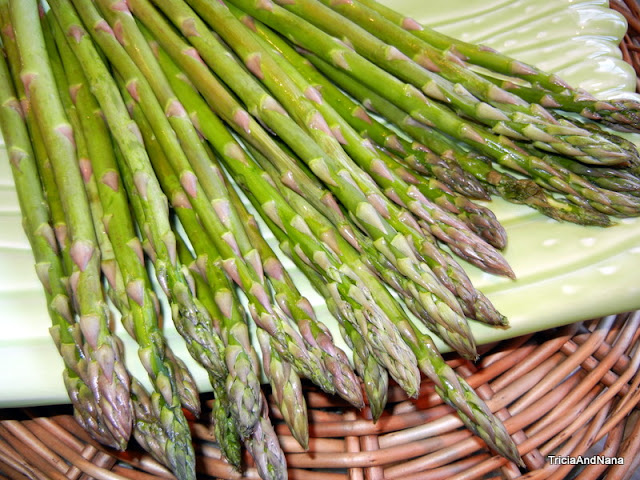 Not to mention that I love any opportunity to whip
out my asparagus plate from Crate and Barrel :) 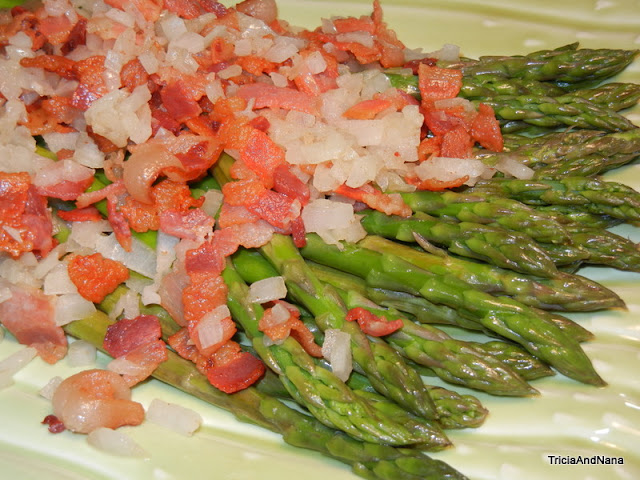 Happy Easter and Passover to all -
I will be chowing  down with the whole family at Nana's !