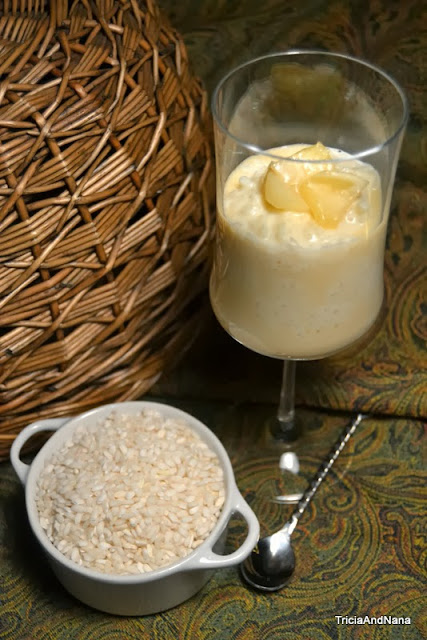 Per Nana~
After spending an incredible four days in Seattle at the IFBC and meeting so many Doristas, I have been going over all the goodies and information that was given to us. I will be reporting on all of the suppliers and their products, plus our wonderful Saturday dine-around that was sponsored by Urban Spoon. The highlight of the whole conference (other than meeting the Doristas) was of course meeting Dorie Greenspan and her lovely husband Michael. 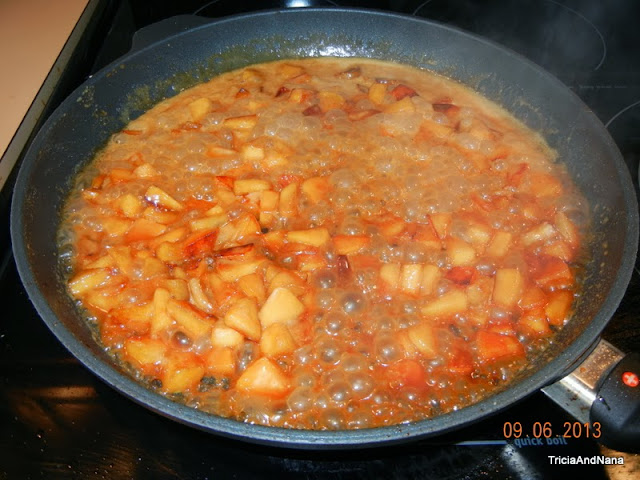 Moving forward to this week's recipe, AMFT offerred a bit of a different take on rice pudding. Dorie's instructions for boiling the arborio rice was new to me but worked beautifully, and cut down and the cooking time for the pudding. Normally I have cooked the rice for close to an hour on low heat to get the pudding thickened, but this was completed in just thirty minutes. 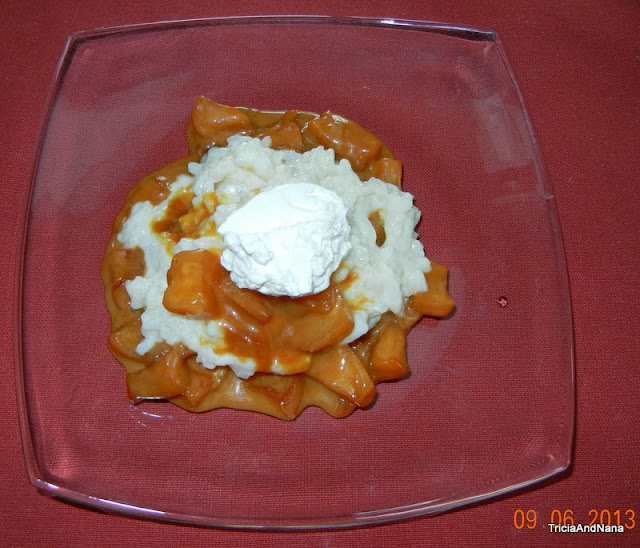 Hubby proclaimed this to be the best rice pudding ever. Unfortunately, when I prepared the caramel apples I ended up adding the whole squeezed lemon to the sugar mixture instead of measuring it out. It all looked good, browned nicely, and tasted awful. It was so bad that I actually had to throw it out. That aside, this will be the rice pudding recipe that I  use again and again. It was really that delicious.

Per Tricia~
The IFBC, Seattle, the Doristas (each and every one of you !!!), and of course Dorie and her amazing hubby Michael - all EXCEEDED my expectations.  Normally on French Friday's I find that I fare better when my expectations about a recipe are low - the old "inverse relationship" thing.  But I was so excited going into the event that I couldn't help myself. My already high hopes were exceeded with a wonderful experience that was "off the charts" on every level. Yes, it was THAT fabulous.  I am still smiling from ear to ear and like Nana, look forward to posting more details in the near future. I would also like to send a thanks to the Doristas who did not make the event and yet sent us wonderful comments about our attending- you all are THE BEST and we look forward to meeting ALL of our FFWD friends in the future.

Oh my. Perfect time of year and perfect recipe. I don't usually make homemade pudding so initially thought the cooking time sounded like a long time- yet it did move quickly and smelled delicious. 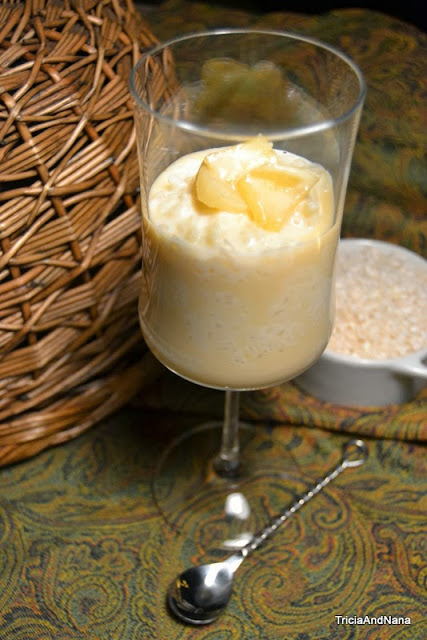 And I did use a new product from the conference- my sample of the Lagrima Vanilla.  It was very good and I went on the heavier side of the recipe, which my husband said he appreciated - so I was all the more pleased about the flavor. (www.lagrima.com) 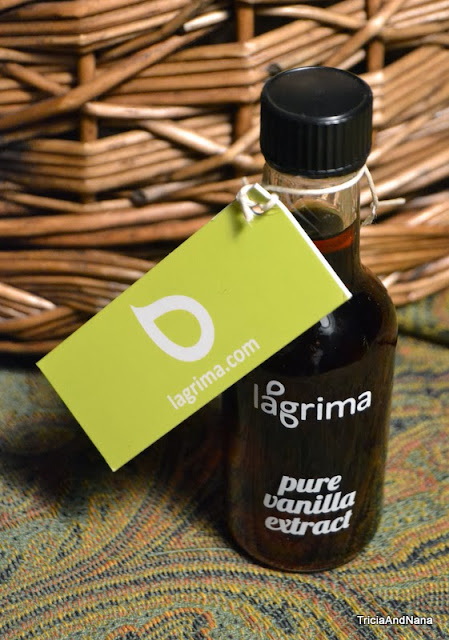 There were very few steps and with Dorie reminding us when the pan might splatter (good call as usual Dorie !!) it was an easy week. Next time I will try to get a bit more color to my caramel sauce but it tasted amazing regardless.  I loved it and my hubby was delighted. DELIGHTED. I will absolutely make this again when the boys are home and I will be sending over some leftovers to my Dad.......:) 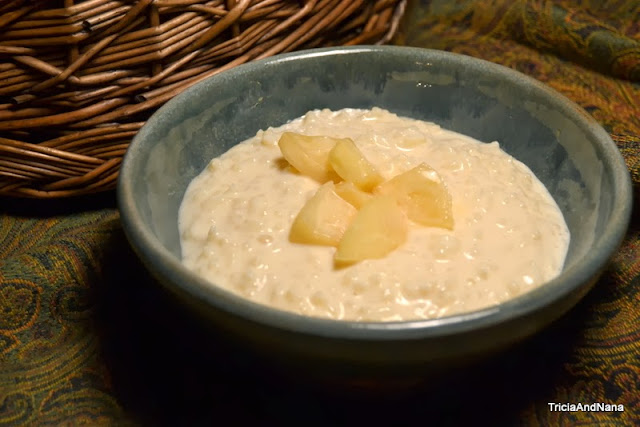 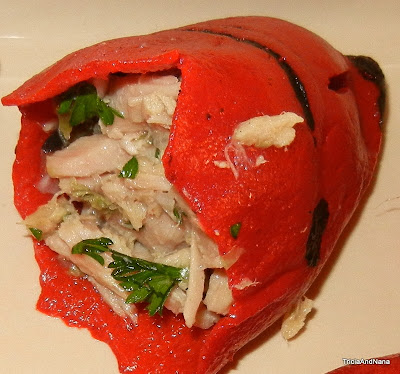 Per Nana~
I have been wanting to make this recipe since the first time I saw it in "Around My French Table". However, I did not find the peppers too readily, so I sort of forgot about it. I was happy to see it on the list for September and although the peppers I found at Wegman's were from Peru (and not the traditional ones from the Basque region of France or Spain) they were quite good.  I thought the filling was very tasty. 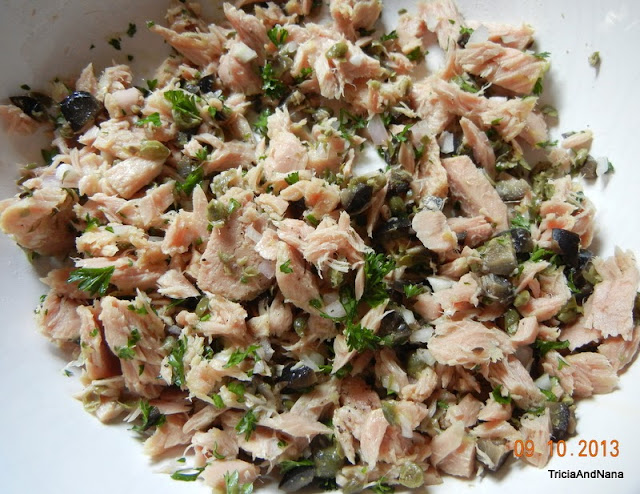 We love both capers and olives and I have been buying the tuna fish at Costco- it actually comes from Italy and was perfect for this dish. It is really more "tonno" than the tuna we typically find in the US. (I love to eat it out of the can, although Hubby insists it needs mayo) 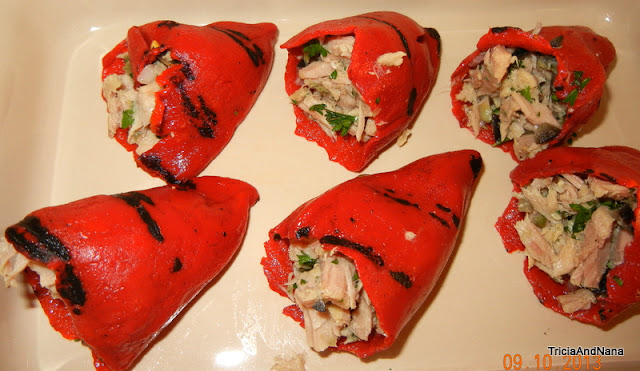 The recipe was certainly easy to prepare, and just before serving I put it under the broiler with a drizzle of olive oil as Dorie suggested. It was delicious.
Per Tricia~
While I am not as much of a fan of these ingredients as my folks, my husband IS- and he adored this dish.
It was thankfully easy to prepare and we tried it both immediately as prepared and after being warmed under the broiler.
As usual, Dorie was right in her suggestion that a few minutes of heat would really bring out the flavors. Lovely and I just wish I had made more........

"Per Nana" ~
Three years ago when Tricia approached me to do a food blog with her, I had no idea what she was talking about. Here we are, having completed 152 recipes, planning to attend the "International Food Blogger's Convention. Who knew we would come this far.

We are looking forward to meeting so many of our fellow Doristas in person, although I feel like we know them already. We have followed Dorie with all her recipes, her bonne ideas, had many a laugh and a few disasters along the way. If any of you recall when we made the short ribs, I "accidentally" poured the fat down the drain and plugged up my kitchen sink. Tricia and I worked for hours to clear it. (but hey, the ribs turned out pretty good)  I now keep a supply of drain cleaner handy, since "you just never know". 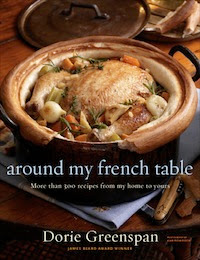 Tricia and I have been to many cookbook signings over the years and met quite a few well known chefs.  However we are extremely excited to finally meet Dorie Greenspan - whose book "Around My French Table" started it all for us. 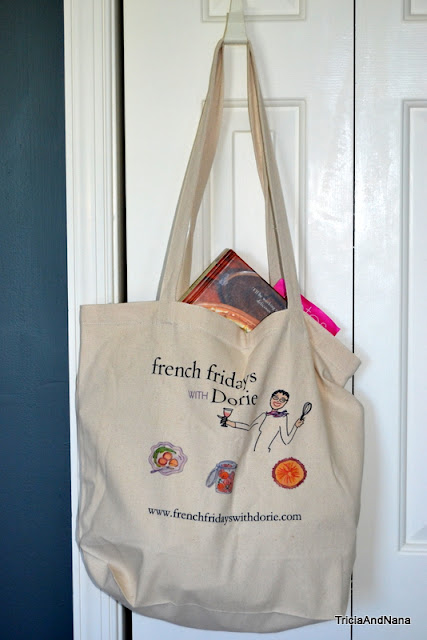 The IFBC is exciting in and of itself, but the fact that Dorie will be the keynote speaker is really over the top.  Aside from the blogging portion of this adventure, I have learned a great deal about cooking, a few new techniques, and tasted some foods I had never even heard of - all thanks to Dorie Greenspan.  I have also collected more spices and gadgets than I will ever use in a my lifetime, but I can't blame that all on Dorie :) 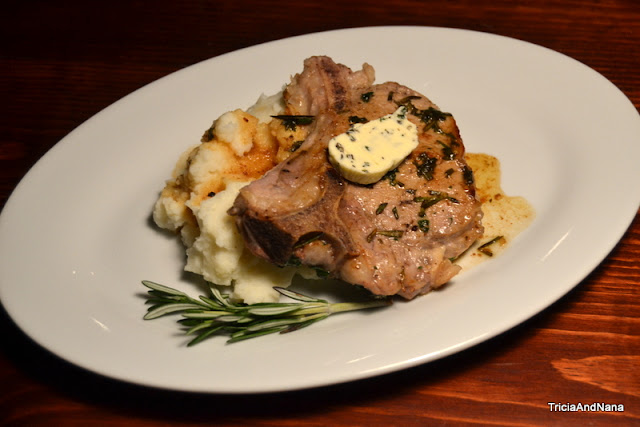 Per Nana~
I can remember in the late 60's and early 1970's having veal cutlets
almost once a week. It was quite inexpensive at that time -about $2.35/lb
and it was such a tender piece of meat. 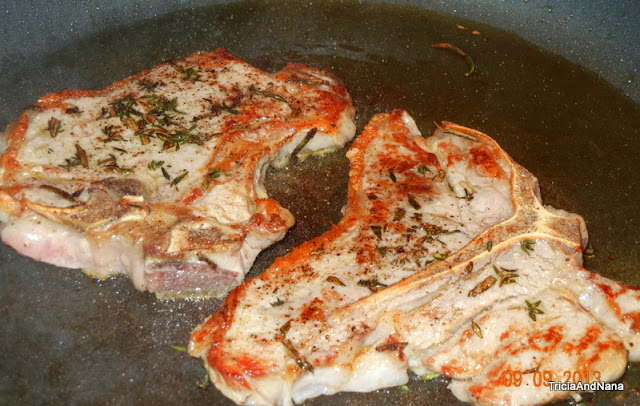 I'm not sure how the animals are being raised today, but both pork and
veal are extremely tough cuts of meat.  After searching for about a week,
I finally found a package of two small chops and was disappointed
because they were not at all what I expected. 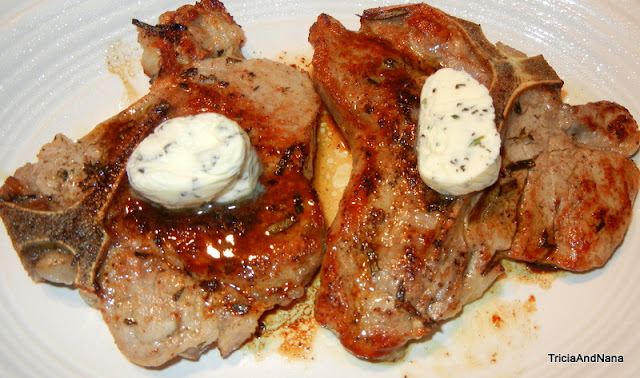 However, I followed the recipe perfectly and with the flavored butter -
I thought it was delicious. The rosemary butter would go very well
on other meats  too, such as pork tenderloin or chicken.

Per Tricia~
It was hard for me to NOT prepare this one since Nana ran reconnaissance
on the ingredients and delivered them along with her rosemary butter.
I have to say that this was one of the most photogenic dishes I have
knocked out in a while, but my husband and I were also disappointed
that the veal was not more tender. 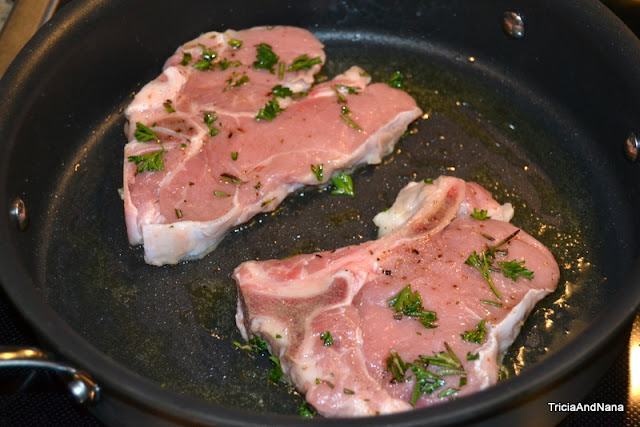 Whether it was the actual chops we had or simply me overcooking
them (or combination....) they were not off the charts. 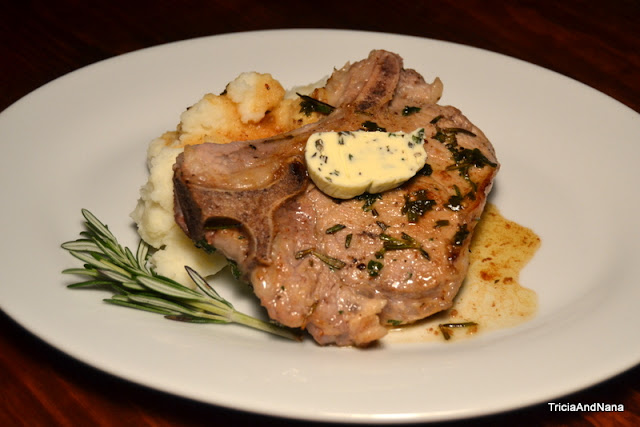 But the recipe over all was- that butter was AMAZING and we loved
the sauce Dorie had us preparing. Fabulous. While a few of my two legged
taste testers were not available, you can see from the photo below that I
had a new applicant for the position.  And yes, I did manage to catch him
before he got any further...... 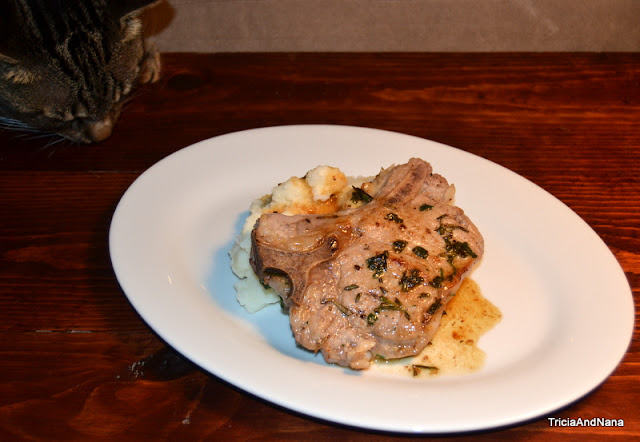 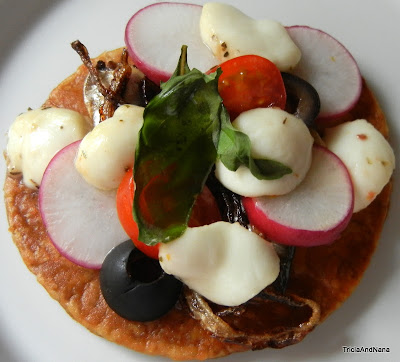 Per Nana~
Although this week's recipe calls for fresh tuna, I simply could not do it. I substituted sardines, which I think worked very well, adding to the Niçoise flavors.

The puff pastry rounds were a little overdone, but tasted good regardless. After adding the rest of the ingredients I put it back into the oven to heat and it did add to the flavor. I only prepared two because I did not think we were going to enjoy these pizzas but I was surprised that they turned out so well. 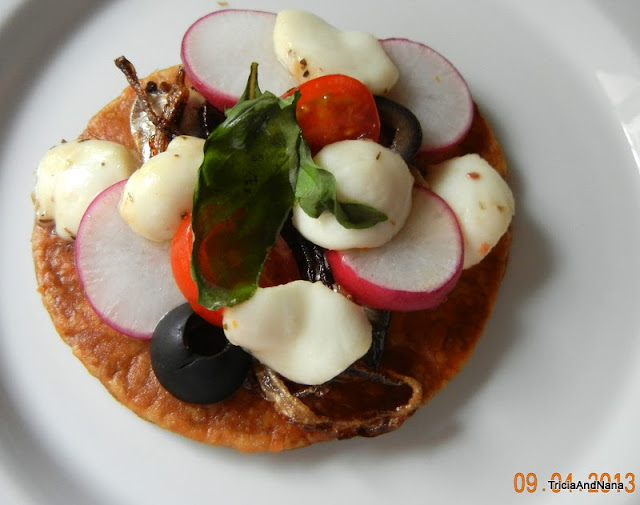 The amount of time it took to prepare the recipe was not worth all the trouble and I do not think it will be repeated. That said, I used the balance of the puff pastry to make three delicious apple turnovers. Now that was worth it.....

Per Tricia~
"Do not wait until the last minute".  That was my chant this summer to my sons who had reading and other school commitments to knock out. Hopefully they are not reading the blog this week because I carefully PLANNED on waiting until the list minute (in a procrastinator's defense, it was a busy week :) and preparing this for hubby as a Friday night meal. And then hustling to post all the results.

There is a reason we don't wait..... and that is because "stuff comes up".  Good stuff indeed though and we got an offer today to take our younger son out of school for a few hours of dinner at a nearby restaurant. No raw tuna involved.  Fingers crossed I will be showing my results for next week's post.  And that Nana saved me a turnover.