We have enjoyed many wonderful Italian food traditions over the years, as Nana married into an Italian family.  I am blessed with the joy of having both Italian and French lineage, which makes for some lovely meals.

A standard that we typically serve as an appetizer or first course would be a Caprese salad (Insalata Caprese).  I can not count the times that Nana or I have made this, but I can tell you with complete certainty that it has never before included a strawberry.  Until this French Friday........


This week was even easier than ever, with the toughest
part of the "recipe" involving driving to the store to get
the ingredients.  And luckily, my husband handled that :)
I was surprisingly curious to taste this "old favorite"
with a new twist and it did not disappoint.
In addition to the sliced fresh strawberries, mozzarella,
fresh basil and cherry tomatoes, I added some olive oil,
Maldon sea salt and cracked peppercorns.
I did not have the pink ones Dorie suggested using
and opted not to ask hubby to look for them at the store.
Why ruin a good thing. He might have then asked how
much the Maldon sea salt cost ......
In addition to the strawberries being new on the
"Caprese" plate, I typically do not add a vinegar to this
combo..... but did this time per Dorie.  I used a Raspberry
Champagne vinegar and it was a lovely compliment
to the flavors.  My husband, older son and I shared a plate
and we all agreed that we really liked the combination.
We also thought the "kick" of the fresh basil, as well as the
vinegar, was what really brought together the individual
items on the plate. They made the dish.
I will gladly use this as a new way to enjoy these ingredients
during the summer months - a keeper for sure.
Per Nana ~
Normally, I use fresh mozzarella from the

Italian  Market, but since I had some Polly-O
This is not my idea of a caprese salad
because of the strawberries.
I didn't particularly care for the combination.
left  from making a Manicotti dish, I wanted to use it up.
However, let it be known there is no way this
can compare with a fresh mozzarella.
The dish is quite impressive looking, but it just didn't work for us.
Posted by tricia s. at 9:00 PM 21 comments:

This week's selection falls under the "recipe that is more like a technique" category.  We always enjoy those because they are quick, simple and typically bring us back to some basics we love but haven't prepared in a while.  Roasting, yes.  Rhubarb ?  Not so much.  Neither of us could recall having much rhubarb experience - eating or cooking it.  Which made the simple act of roasting turn into much more of an adventure.....


When I was growing up my parents had a huge vegetable
garden on our property.  I guess it was really known as a
"Victory Garden" during World War II.
My mother grew rhubarb and always made jams and other
good things, but I would never even try to eat it.
I was not into fruit back then.
So today I actually purchased rhuburb for the first time.
I had to "Google" to learn all about it. 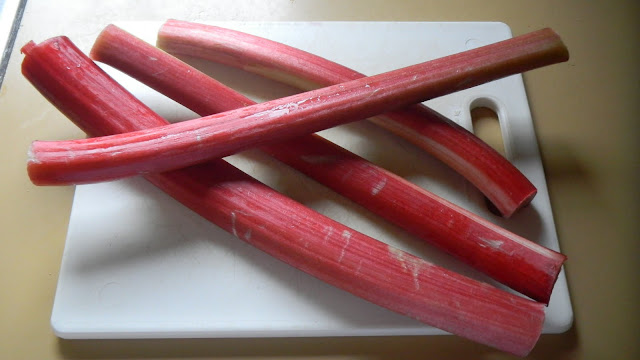 Voila!
I made the roasted rhubarb recipe from FFWD.
I'm not at all certain if the results
are correct, but it was an excellent dessert. 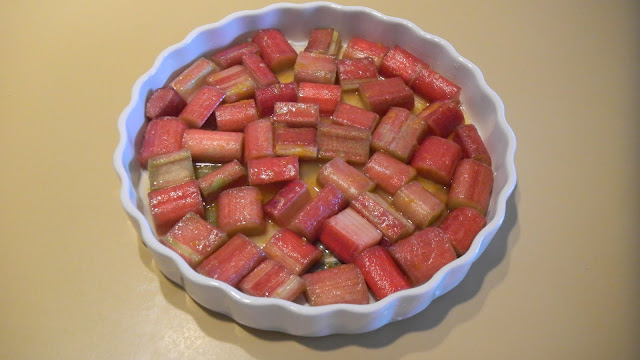 I drizzled some honey on top and chilled it for a few hours. 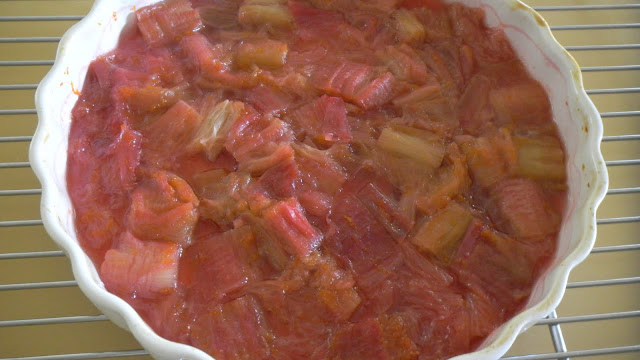 We enjoyed a small dish with a dollop
of whipped cream after dinner. 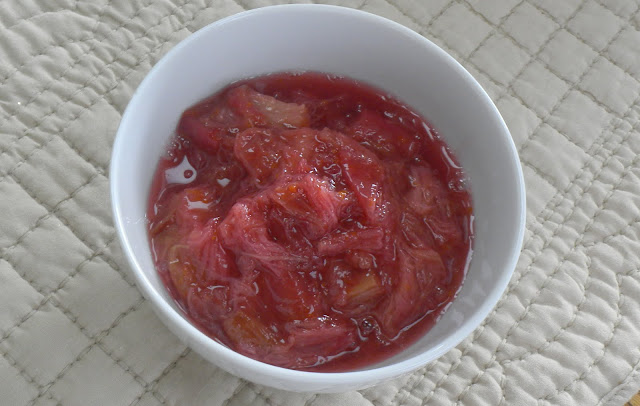 Guess what  my new favorite dessert is?
Next time it's going on top of vanilla ice cream.
Mmmmmm.


Per Tricia ~
(update - I forgot to include the "finished product shot" when I first posted this. I laughed out loud when one of the comments asked if I remembered the roasting part :) Though I do have my days......)


I am slightly embarrassed to say that I somehow
managed to mess up this utterly simple recipe.
Not possible, you say ?
I am blaming the Rhubarb :)
I am actually relieved about it because I could not
reconcile my own "taste test" to the raving review
Nana had provided.  I gave her a sample the following
day and the minute she saw it she knew something was amiss.
We had teased about the fact that our local market
only had 4 pieces of rhubarb left -I had said that
Nana and the local Doristas must have wiped them out.
It was just under a pound and mostly green, but I
adjusted the recipe slightly for weight and forged ahead. 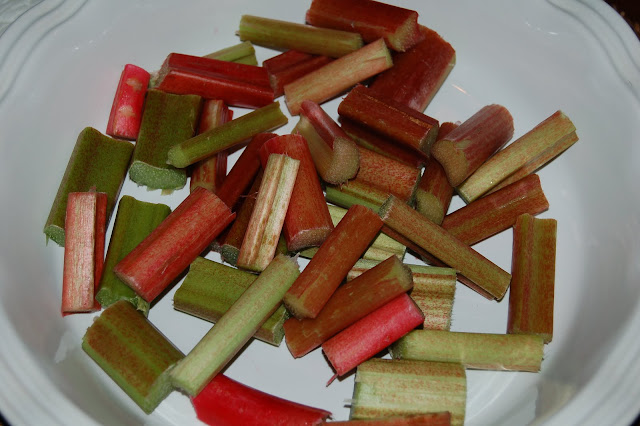 I had all taste testers available plus a visiting
friend of my older son.  And all of them wanted to like
this dish but were suspect from the moment I starting
cleaning the "celery looking stuff". 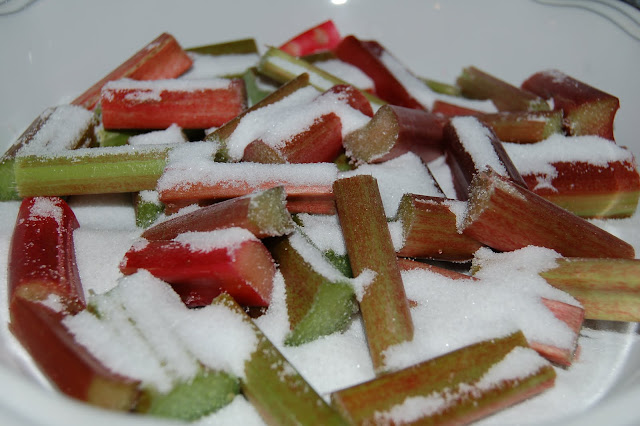 Since I had a lemon on hand I decided to use that zest
although I would have preferred the orange flavor.
I initially thought that the dish simply ended up with
too much of  a lemon flavor- the first question from my hubby
was "how much lemon is in here ?". 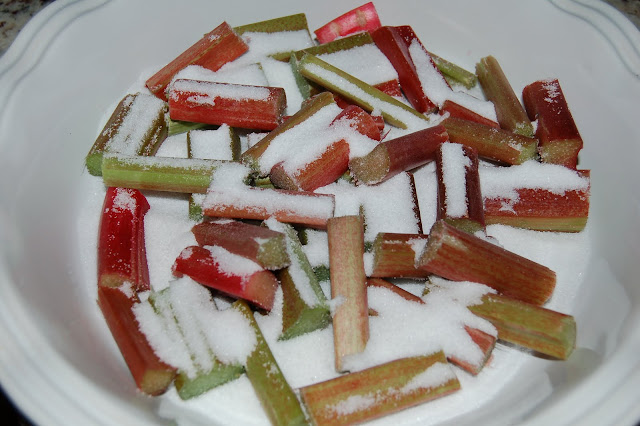 It was not that anyone officially disliked the results
(with all that sugar, how can you go too wrong ?) but
no one wanted more than their small taste test.


And none of us would have associated the results
with something you might add to ice cream.
I had been all excited to try some of my new
Savannah Bee Company honey that I procured
on my Hill's Kitchen visit in DC, but after
tasting the dish I decided to save my honey.
Luckily I had Nana to set me straight.
After tasting my sample she promptly told me
to "throw the rest out".
We had a good laugh and she has promised to make
my family a batch.  And we will be inviting
my son's friend back for the rhubarb redemption.......
Posted by tricia s. at 8:54 PM 31 comments:

As we have often found with the FFwD recipes, the higher the expectations....the greater the disappointment.
These ribs cooked to perfection and were "fall off the bone"
tender, while having a lovely thick glaze and crust ~
what a great combination.  Unfortunately, none of us cared for
the flavor of apricot and ginger.  While we will not be revisiting
this recipe, it did inspire us to cook ribs more frequently -
since our guys all LOVE them ~ 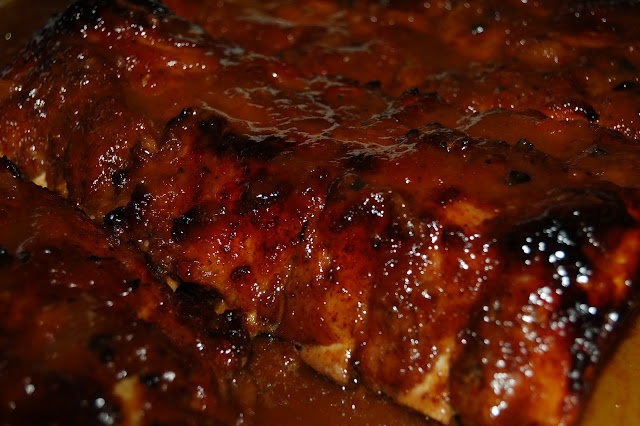 
I knew I was in trouble when my 15 year old said
he was actually concerned about this one because he
did not like the smell coming out of the kitchen.
Normally he would not have cared so much, but
he LOVES ribs and could not bear the thought of this
actually turning out to be a disappointment.
The ribs looked magnificent as they marinated and
cooked, but we could not get our heads (or tastebuds)
around the ginger~apricot~cola combo. 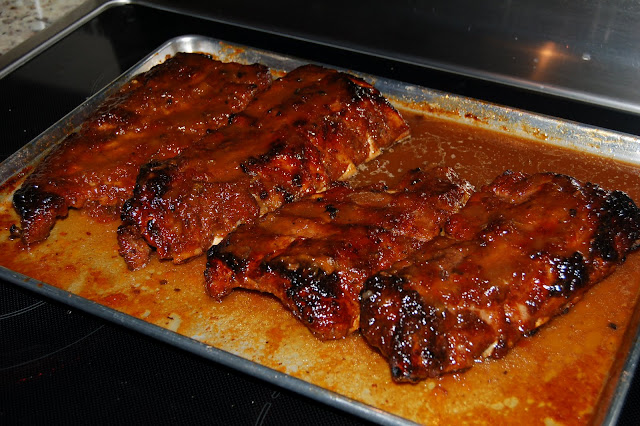 We are big fans of BBQ'd ribs and tend to look for well
known "rib joints" - esp when we travel in the South.
"Sticky Fingers", "Germantown Commissary", "Calhoun's"
and others dictate our stops while traveling :)
While we did not think it actually possible for us
to dislike a rib recipe, this one ended up coming the closest.

My 15 year old made it through only two ribs and did
not finish his plate - a first.   My husband and older son
were more gracious about how well they thought
Dorie's cooking time and method were, but also
agreed they did not care for the sauce.
Rather than protecting my feelings at dinner
not turning out as hoped, I think they were actually
defending Dorie more than me :)  They do not want the
FFwD gravy train of goodies to halt no matter how
unusual a rib dish may turn out...... 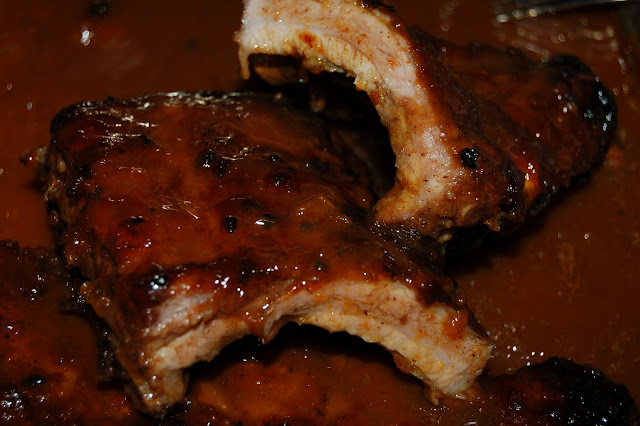 
To tackle the recipe for this week's spareribs, I bought
a small rack of baby back ribs at our local Wegman's supermarket.
It was just the perfect size for Hubby and myself. 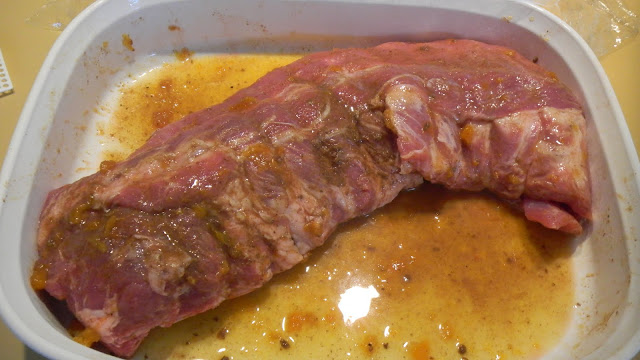 Following the recipe was easy, since there was not
a lot of prep work.  I made the rub using the spice called
"Chinese Five Spice Powder".  I thought it it might be
something really exotic, but when I found it in the
Giant supermarket, I decided it wasn't. 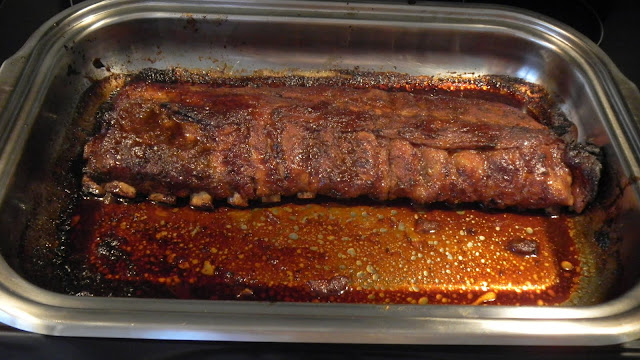 I cooked the ribs according to Dorie's instructions, and
they cooked to perfection.  The ribs were served with coleslaw,
which was a nice side dish. 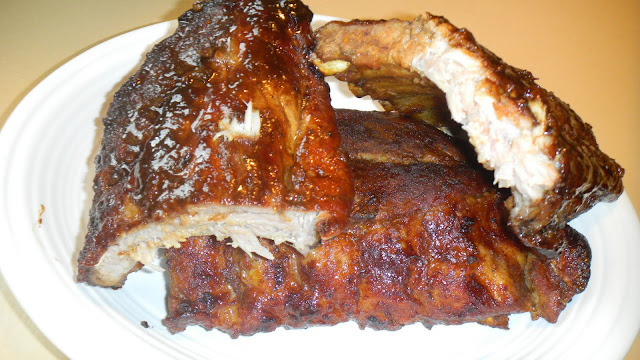 Overall, however, we were disappointed
with the flavoring of the ribs.  While I would use this recipe
for a reference in cooking ribs, I would definitely
not repeat the spices, cola or jam portion.
Posted by tricia s. at 8:23 AM 17 comments:

Although the weather topped the mid 90's this week (with enough humidity to feel like 100 degrees).....our assignment for FFwD consisted of summer soup.

Curious, and perhaps a bit hesitant (did I mention that our central air had broken......) Nana and I embraced the adventure of a new French Friday and got out our stockpots ~


Were it not for FFwD, I can safely say that I would
never have made this recipe.
There were just enough items that I am just not
fond enough of -mushrooms, asparagus and spinach. 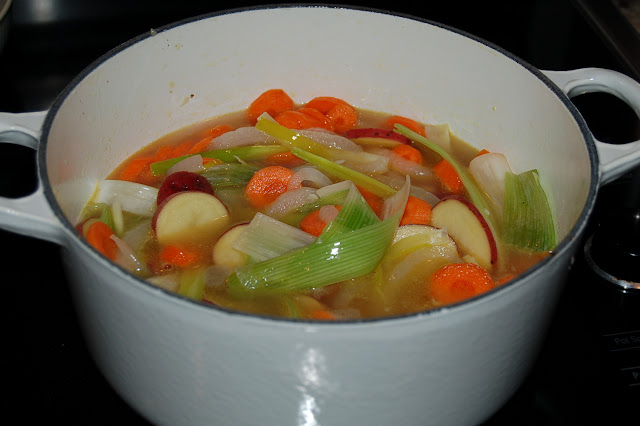 Luckily, my three guys are all fans and looked
forward to trying the "Dorie Soup". 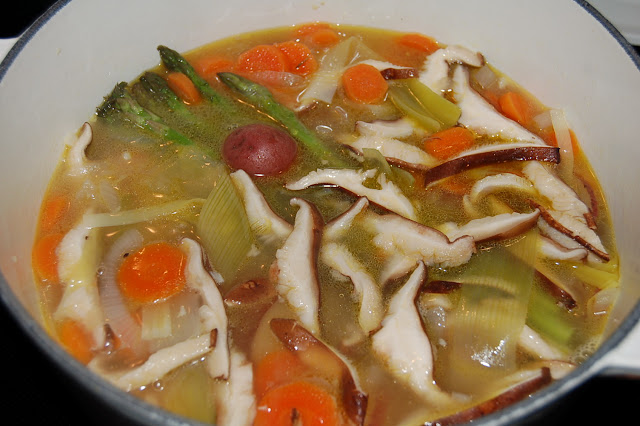 They were not sure why an egg was
going on top - but they all wanted one ! 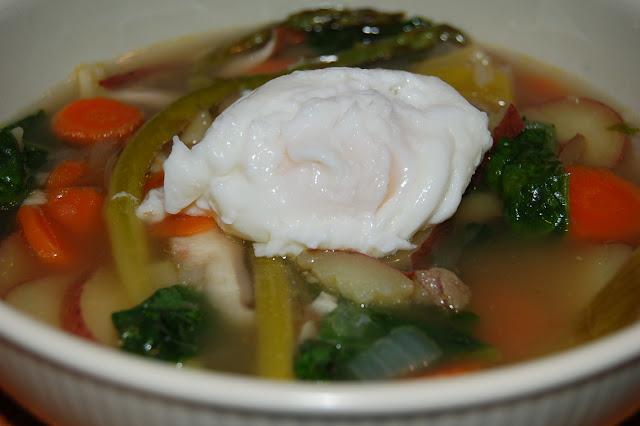 I am sorry to say that I did not even try it myself,
and having three tasters didn't push me to do so.
All three liked it, which frankly, surprised and delighted me. 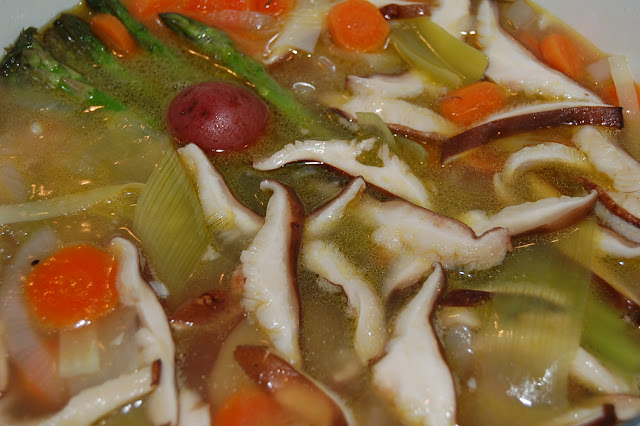 The gourmets declared that is was indeed a lovely summer dish.
My hubby and 15 year old would like it repeated as is,
while my 17 year old suggested the addition of meat
("perhaps chicken", he said) would make him appreciate it more. 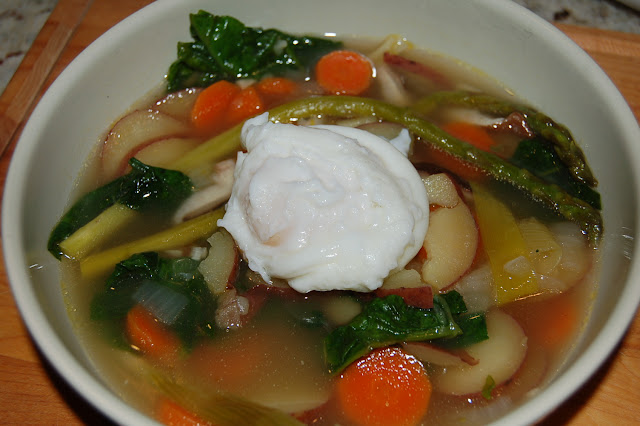 The soup was simple and straight forward.
Cut and chop ingredients and combine.
The only trick at all (since I am evidently out of practice.....)
is manuevering a picture perfect poached egg.
Per Nana ~

This was a refreshing summer soup with
an aroma that was fantastic.
Hubby was going nuts waiting for dinner. 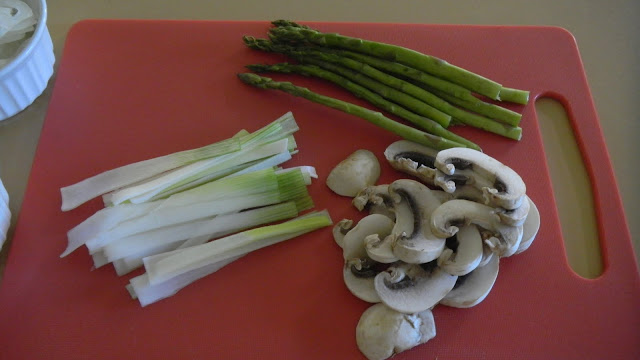 After all the prep work is done, the rest is easy. 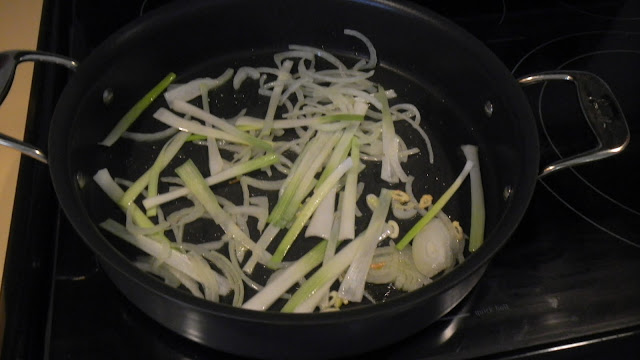 Instead of shiitakes, I used some large white mushrooms
that were in the fridge.  It's amazing how each additional
vegetable adds something else to the dish. 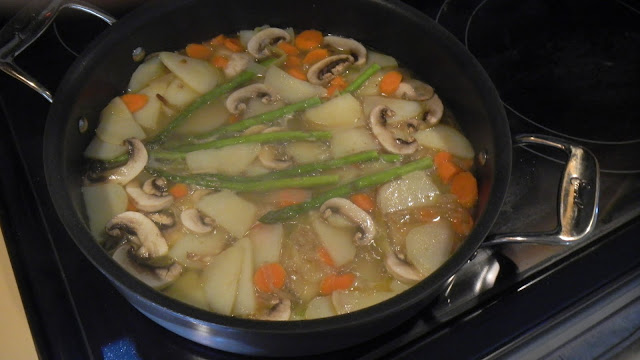 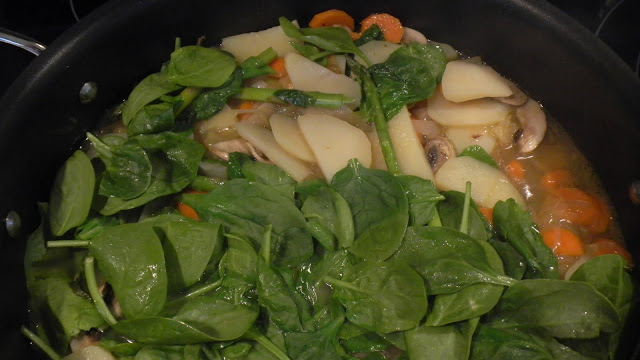 I poached the egg at the end - it looked great and
the taste was spectacular.
A lovely addition to my recipe file that I will use again and again. 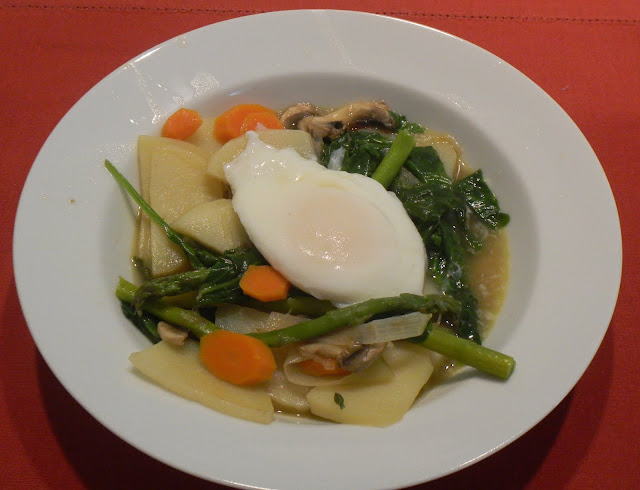 And thanks to everyone who shared concern about
the "memory card incident".  Tricia's hubby was able
to extract the card himself so a trip to the Apple store was averted.
Posted by tricia s. at 5:31 AM 17 comments: