Just as the recipe said, it made us wonder
why we don't cook with barley more ~ 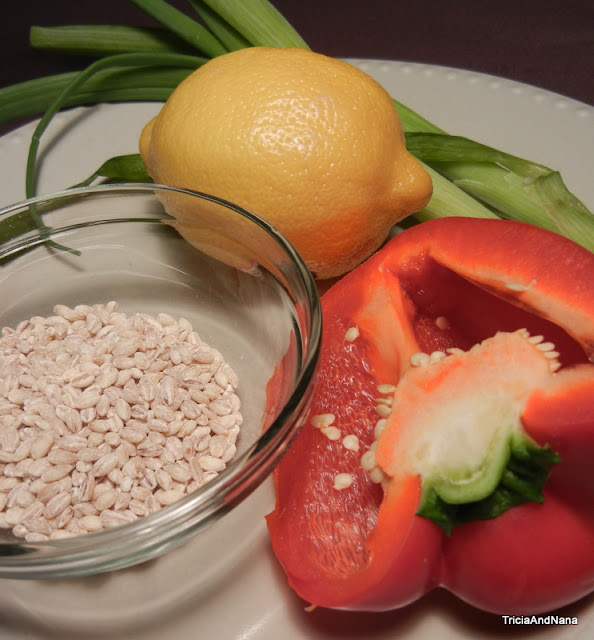 
This recipe brings back memories of Hubby and I when
we were newly married. When I was growing up, my mother did
the cooking in our house  and being young,  I had more important
things to do than learn to cook. Six months into the marriage,
I was really sorry that I did not pay attention. 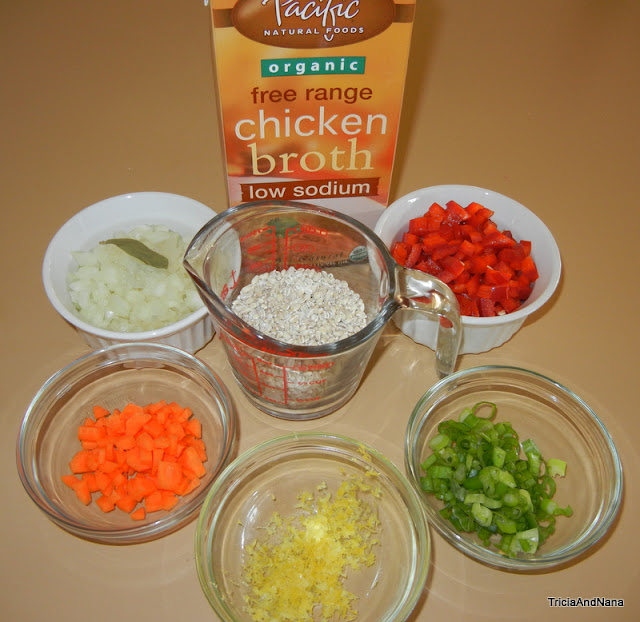 But, way back then, we knew it all......
In any event, I bought a box of barley, and prepared it  according
to the instructions.  Not only did the barley spill over onto everything
while cooking, we had so much barley   we ate it for a week.
(Back then, we didn't throw food out) 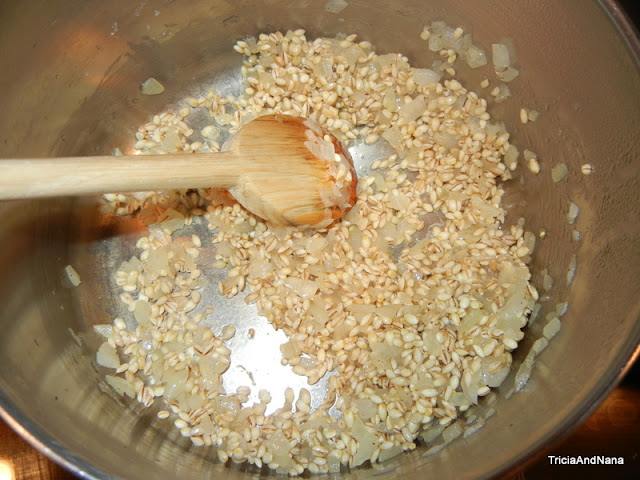 It was many years before I considered cooking barley, but
I have since learned a few  important things about cooking
rice and other grains. That said, I have actually prepared a
wonderful beef barley soup that turned out quite well.

This recipe was good, a bit al dente, but I think it could use a little
bit of a kick for flavor. I plan to use the leftovers in chicken  broth
to soften it more, and to add cooked chicken for a nice
old fashion chicken barley soup. 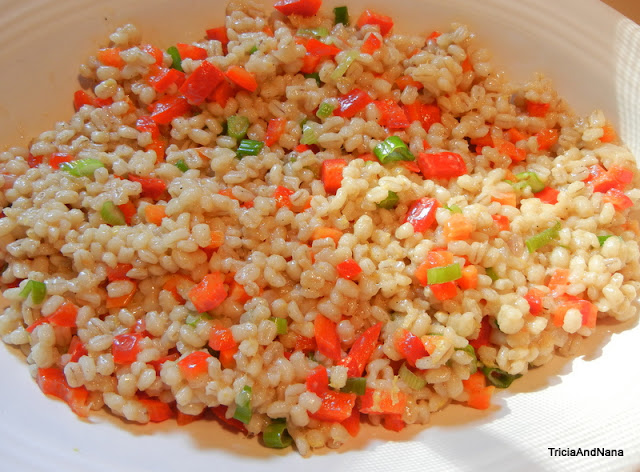 All in all, this was a nice recipe and I can't wait to see how
the rest of the Doristas enjoyed this one.
Per Tricia:

Once again Nana hooked me up with some ingredients.
I included a shot of the barley box to show how well loved it
looks after making back and forth across the yards.  And with the
success of this dish it may be getting more play. 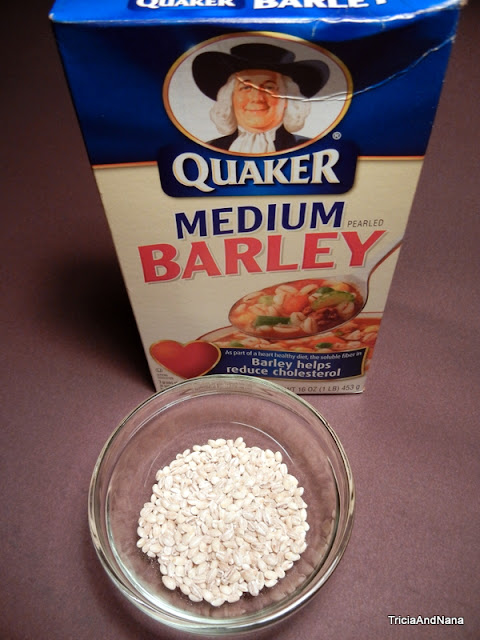 This was a very simple recipe and with the exception of my not
usually having barley in the house- the rest of the items were
standard fare.  The prep time was minimal and most of the cooking time
was spent with little to no interaction from the cook. My kind of recipe :) 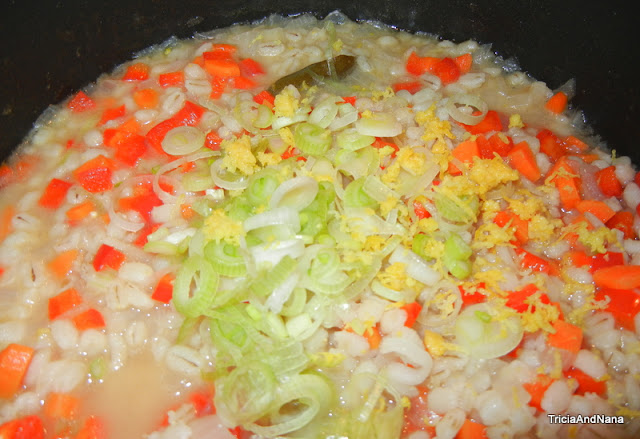 My husband liked it and was very surprised at how "sweet" he thought it was.
I didn't find it too sweet but did like lemon zest influence.
It really made the dish, in my opinion, and I would not necessarily have
added lemon to a barley dish unless Dorie told me to.  Good thing she did.
The boys liked it and agreed they really liked the lemon flavor, but were
otherwise a bit lukewarm.  They can't all make it out of the ballpark. 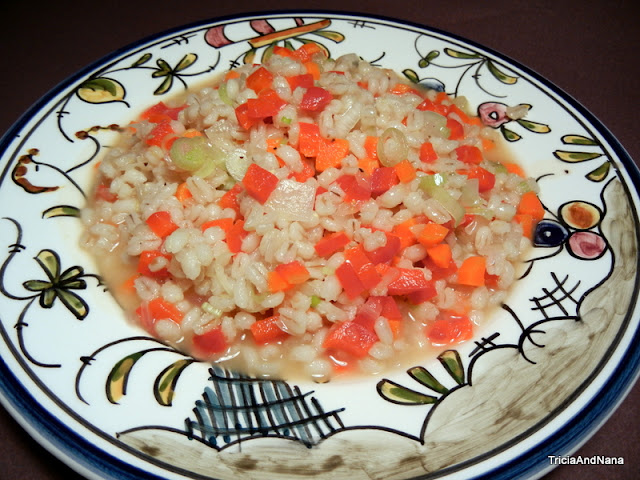 Glad to see the links are back up - we missed the Doristas !

This week's recipe for salmon with basil tapenade was
an excellent choice and quite simple to prepare. I prepared
two salmon filets and halved the rest of the ingredients.
I used basil from my containers on the patio,
(that those cute rabbits left for me) and it was delicious. 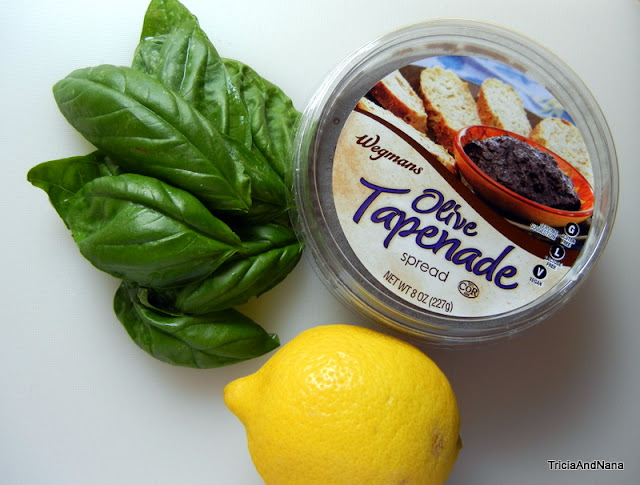 Even though I cut all the ingredients in half, I forgot about
the lemon.  Not only did I not cut the lemon portion in half, I added
it all at once to the tapenade instead of saving some of it for the
sauce.  As I mixed the tapenade and basil with the juice I knew it was
a bit too soupy. 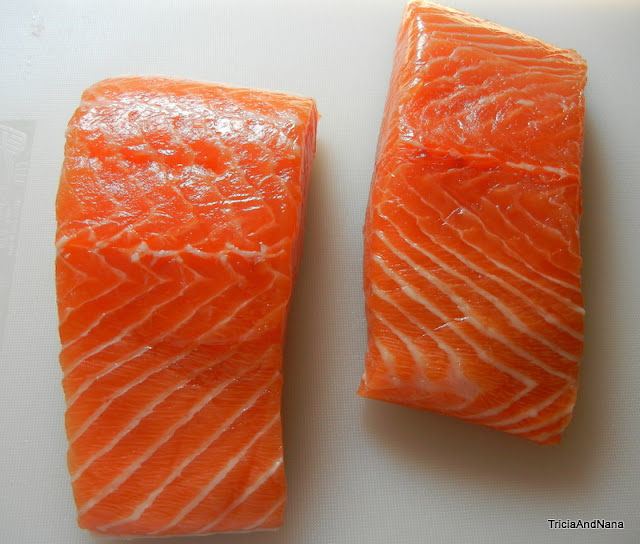 Since my frying pan can go into the oven, I seared it on top of the
stove as instructed and then into the oven. It really turned out well,
the flavors of the tapenade and basil  were excellent.  Even the
extra amount of lemon was not too overpowering.

Hubby said he would like to see this recipe again and since we both
love salmon,  that is definitely a possibility.

Nana came to the rescue -  I thought it would still be LYL vacation
....so had not gotten the ingredients (or made dish) before  heading
to work today. She covered me on the tapenade, her amazing
fresh basil and the lemon. All I had to do was pick up a salmon and I
couldn't even do that correctly :)  Actually the store had "Steelhead fillet"
which I initially thought was salmon.  When I saw the salmon I preferred
the look of the Steelhead so took the risk.  Glad I did. 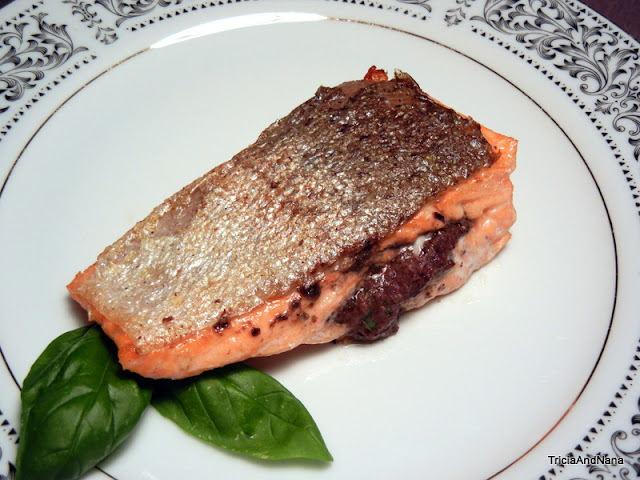 My husband and available taste-testing son went nuts.
This was quite the hit in our house and it exactly the reason we
enjoy FFWD so much- not that much exertion, always an adventure,
great flavors and we get a kick out of getting everyone's feedback. 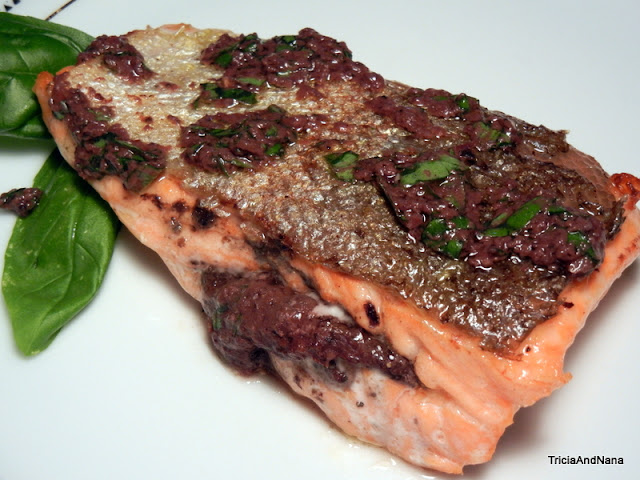 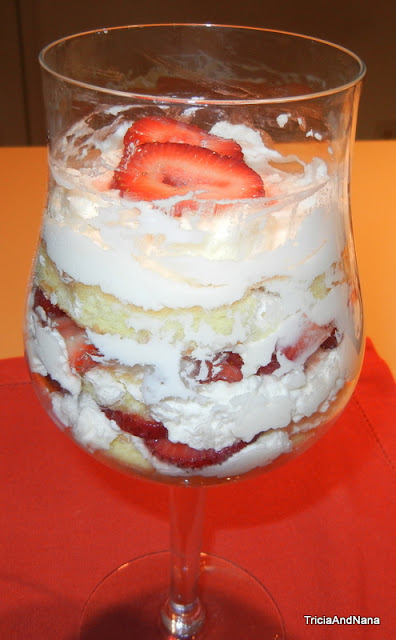 Per Nana:
Dorie's recipe of  blueberry-Mascarpone roulade  turned
into strawberry trifle at our house. I am not a fan of blueberries and
since I am the baker, I decided to use strawberries instead.

I prepared the sponge cake as per Dorie's instructions and had a very
difficult time beating the egg whites.  I did not wait for room temperature
and finally, since I did not have cream of tarter or lemon juice to add, I used
a little vinegar.    These were tips found on the internet.    At this point I
was certain this recipe would be a waste but I mixed it with the beaten yolks
and baked it.  Surprise, surprise, it actually baked a sponge cake and
tasted pretty good too. 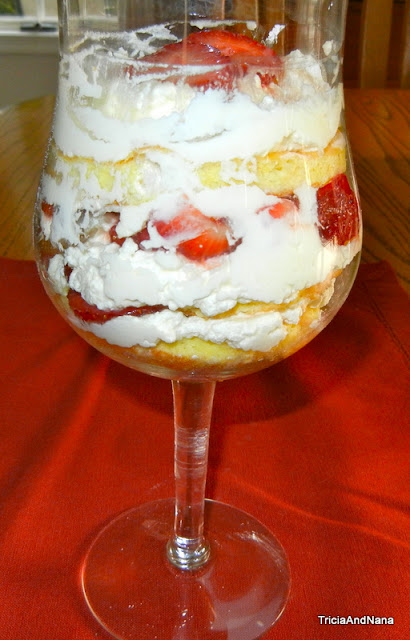 Instead of making the blueberry filling, I sliced strawberries and
macerated them in raw sugar for a few hours. The cheese filling was very
easy to make using the Mascarpone and cream mixture.  I did not
add the berries since I planned to layer them instead.

I used a biscuit cutter to make circles in the sponge cake and prepared
the trifle with a layer of cake, some of the cream filling and sliced strawberries.
This  worked out perfect for hubby and I,  we had a lovely individual dessert.
Making a whole sponge cake filled with fruit would
have been a bit much for the two of us.
Per Tricia:
Since the French Friday's group appears to be taking a break, I am going to take a little vacation as well.  I will check in and post for Nana, and when the weekly links start up I will jump into the adventure again.  Happy French Fridays to all who continue ~
Posted by tricia s. at 4:17 PM 10 comments:

We were liking this recipe before we even tasted it - it is one of the easiest in recent memory, and perfect for these hot summer days.......... 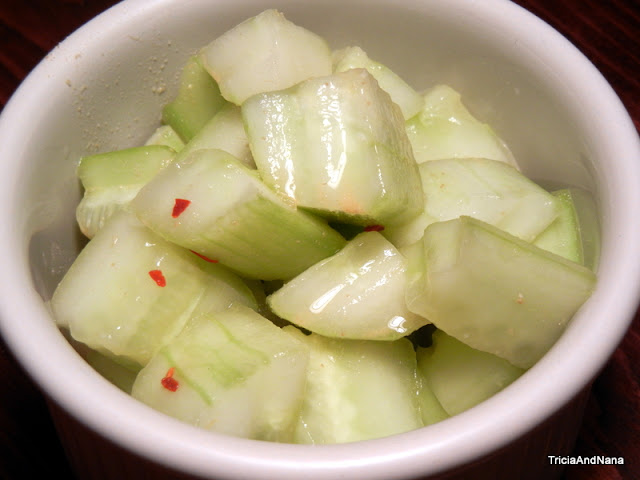 If you love cucumbers, you will love this week's recipe.
Unfortunately, I have difficulty eating any cucumber,
but since Hubby loves them, I went ahead with the recipe. 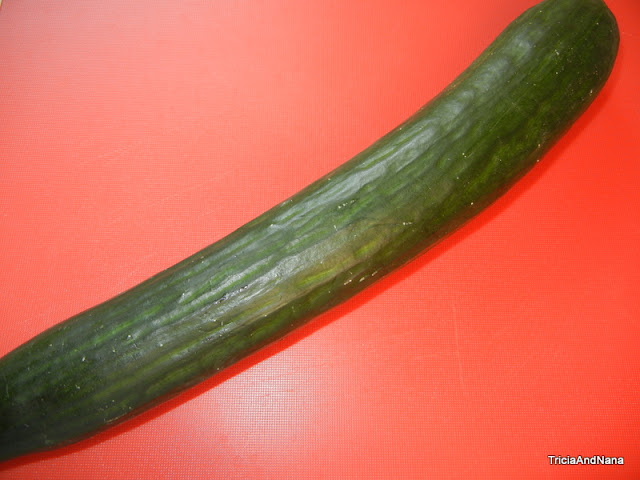 I purchased an English cucumber while at BJ's warehouse
store  and since I had never used one
before, I was anxious to see what they were like.
Just to be on the safe side, I only prepared half the recipe. 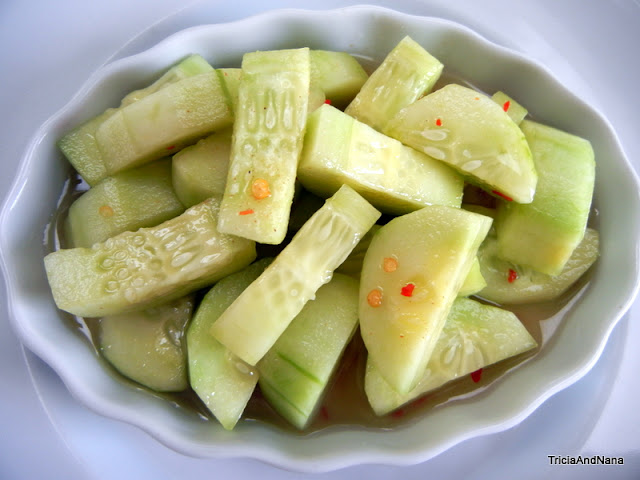 I cut chunks as Dorie suggested and salted them for about
30 minutes. I mixed the vinegar with the other ingredients before
pouring it onto the cucumber.  I did not use fresh ginger simply because
I would not have any further use for it, so I substituted ground ginger.
I'm not familiar with the fresh ginger and I don't know if it would have
made a difference, but this worked for me.

I chilled the pickles overnight and served them as a  side with pork
chops and eggplant slices topped with mozzarella cheese and
tomato sauce.  Not quite eggplant parmigiana, but tasty just the same. 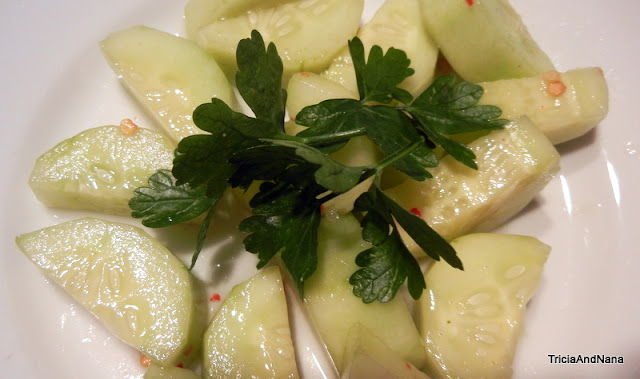 I did try one small chunk of the pickle and thought the flavor was terrific.
Hubby says this one's a keeper.
Per Tricia~
My hubby and kids love cucumbers and we have been
enjoying cut up slices all summer with dips and hummus.
But never with ginger and hot pepper flakes. :)
Leave it to Dorie to take something ordinary and turn it into an adventure. 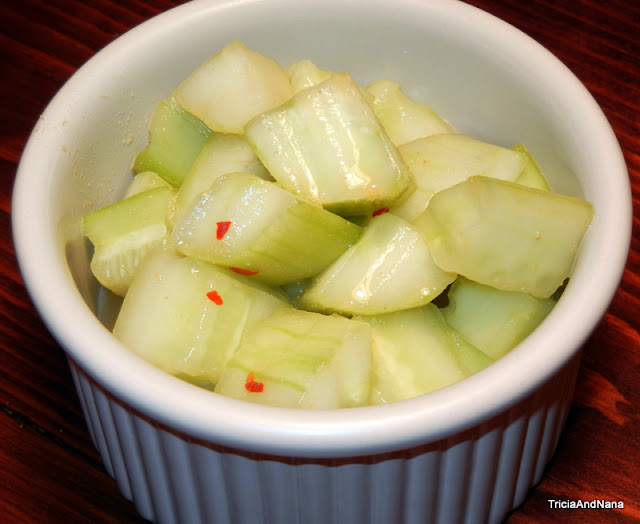 This recipe was a cinch, especially since I substituted ground ginger from
my cabinet for the fresh.  I am certain the dish would be even more delicious
with the "real thing" but we enjoyed the subtle flavor nonetheless.
I did reduce the ginger amount by about half since I used the
ground dry version.   My younger son had a couple of friends sleeping
over and they got a kick out of trying the "French Friday Food".
They both gave the recipe a thumbs up and proclaimed that they were
"better than plain".  Too  funny.

Overall, this combo was a nice change and since we keep all
the ingredients on hand, this may get a repeat performance during
these very hot summer days.
Posted by tricia s. at 6:42 PM 7 comments: