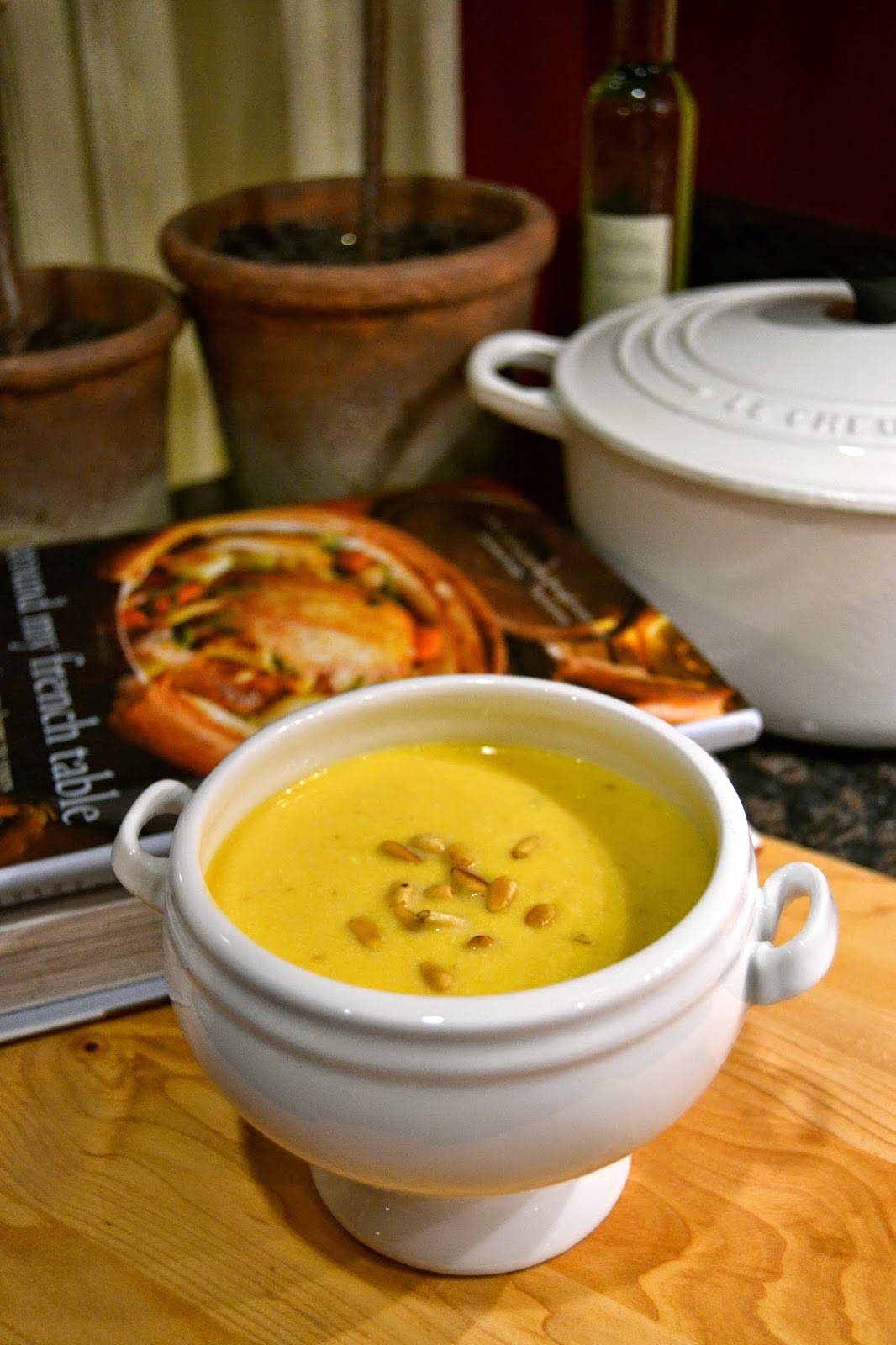 Per Nana~
No red kuri squash to be found so I substituted butternut squash instead.
This is definitely a winner, one of the best soups I've made. I've tasted
butternut squash soup before but did not care for the flavor, however,
I think the addition of the leeks really made this a truly scrumptious creamed soup. 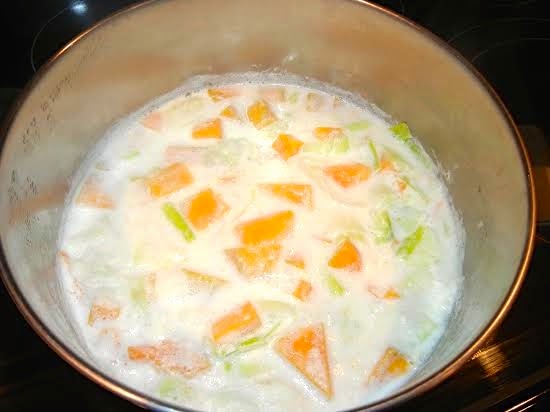 I prepared half the recipe, which was more than enough for us.
After pureeing the soup in the food processor I thought it was
too thick so I took Dorie's advice and added milk. 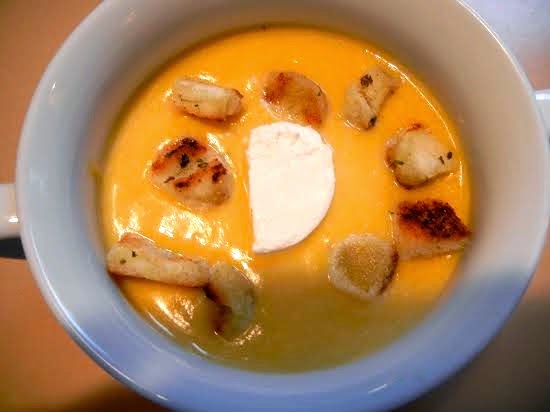 For a garnish I prepared some garlic toasts and topped the
soup with some goat cheese. We both agree that this will definitely be a
repeat, it was so creamy and smooth- simply delicious.
Per Tricia~
Like Nana, I also took inspiration from Dorie's Bonne Idée and went
with the butternut squash. In lieu of the chestnuts, however, which Dorie
explained when combined with the butternut squash resembles the
flavor of the red kuru- I went with toasted pine nuts. 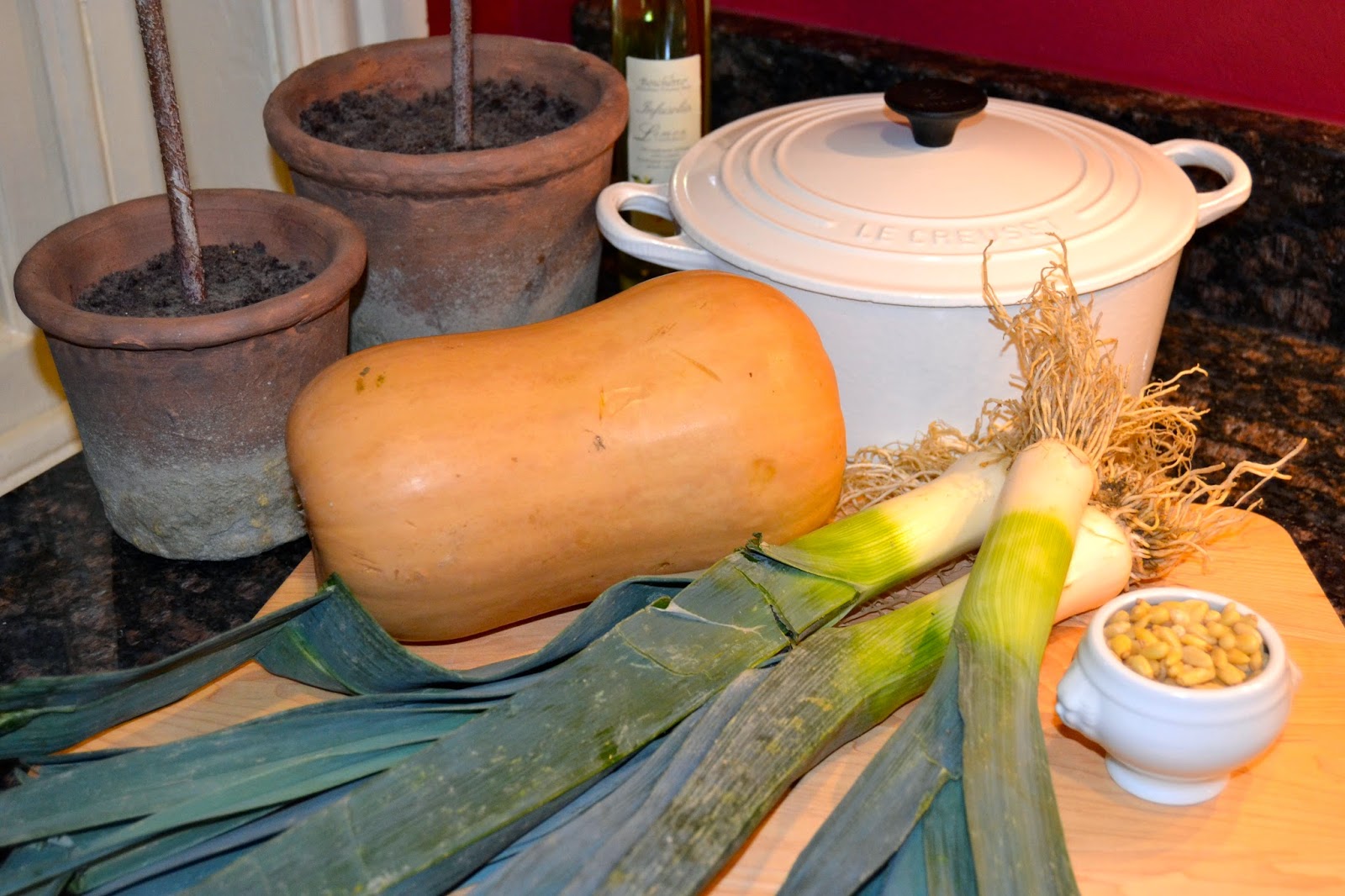 The aroma in my kitchen was out of this world. We love a good
creamy soup and this rich version hit the spot.  And made a ton ! 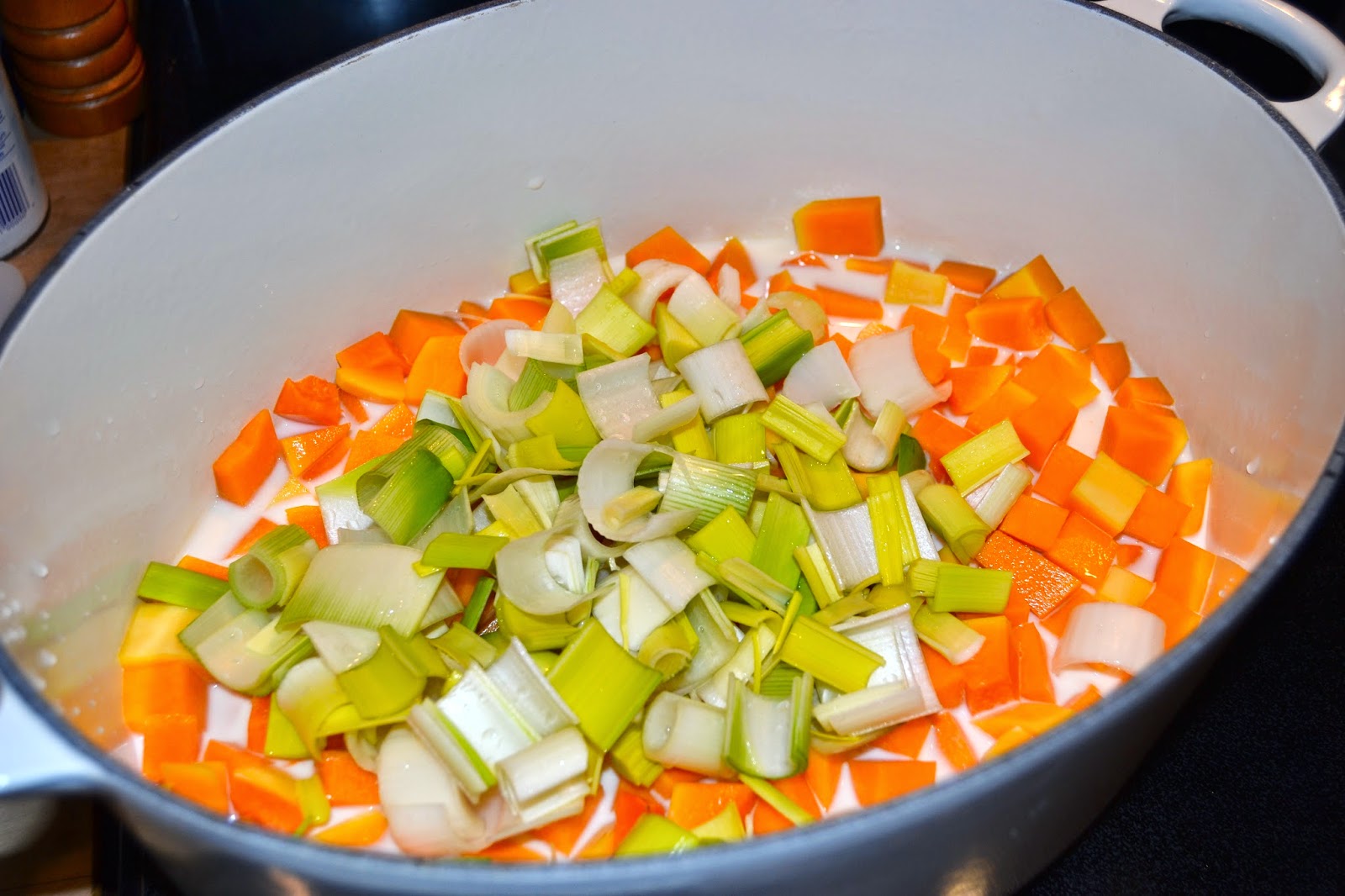 We tried it with toasted pine nuts sprinkled on top and then sent a
version with a French baguette slice and Emmental cheese under the broiler.

As expected, that was the way to go.  Yum. 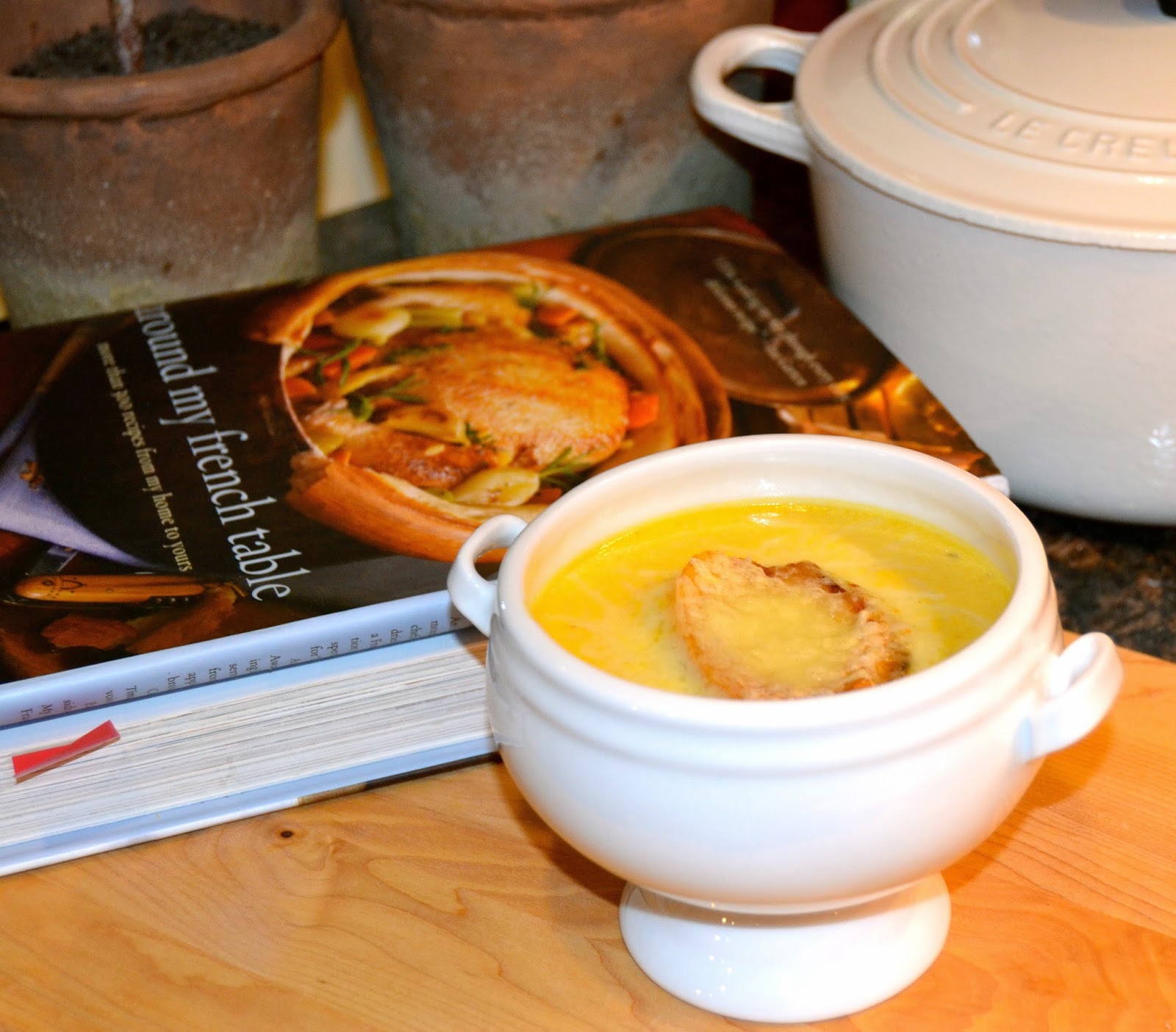 Since we have lots of left overs I plan to tweak spices and seasonings as we try
new each bowl. It is a perfect accompaniment for the delicious Thanksgiving
leftovers. This will be a repeat for sure but I am also keeping my eye out of
the elusive red kuri squash and can't wait to try its unusual flavor. 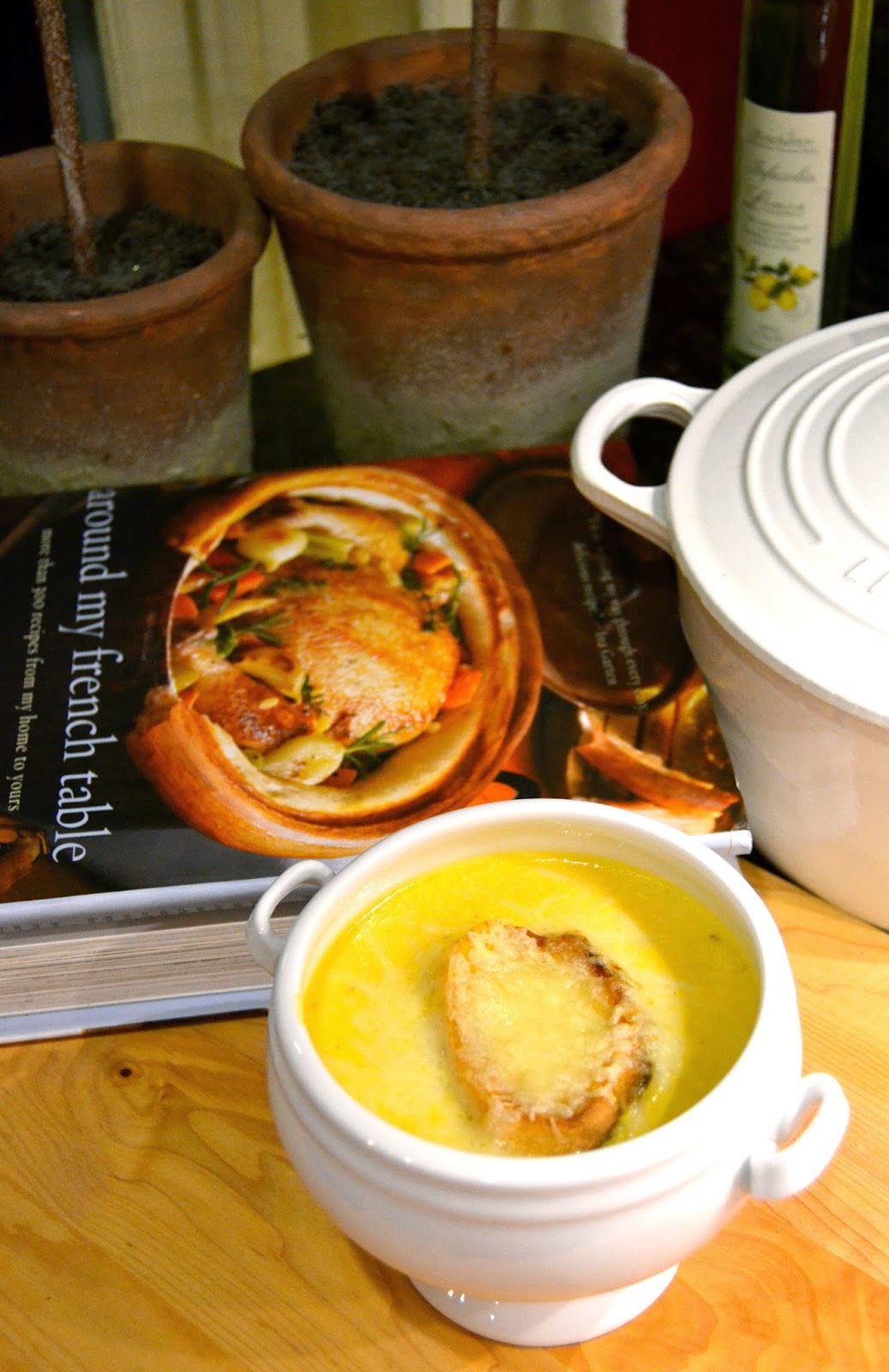 A quick comment about Béatrix, though not the one Dorie named the
soup after :) My older son turns 21 at midnight on this very French Friday.
He was born in 1993, which happened to be the 100th anniversary of
Beatrix Potter's "The Tale of Peter Rabbit". His nursery was dubbed the
"shrine to Beatrix Potter" and I could not believe the serendipity of MY
selected theme having a monumental year just as MY first born needed
a nursery. Well played indeed. And now the kismet of cooking a
"Beatrix recipe"on his special day. The stars are aligned indeed.

Neither boy ever did much care for the stories - but they did like this soup :)