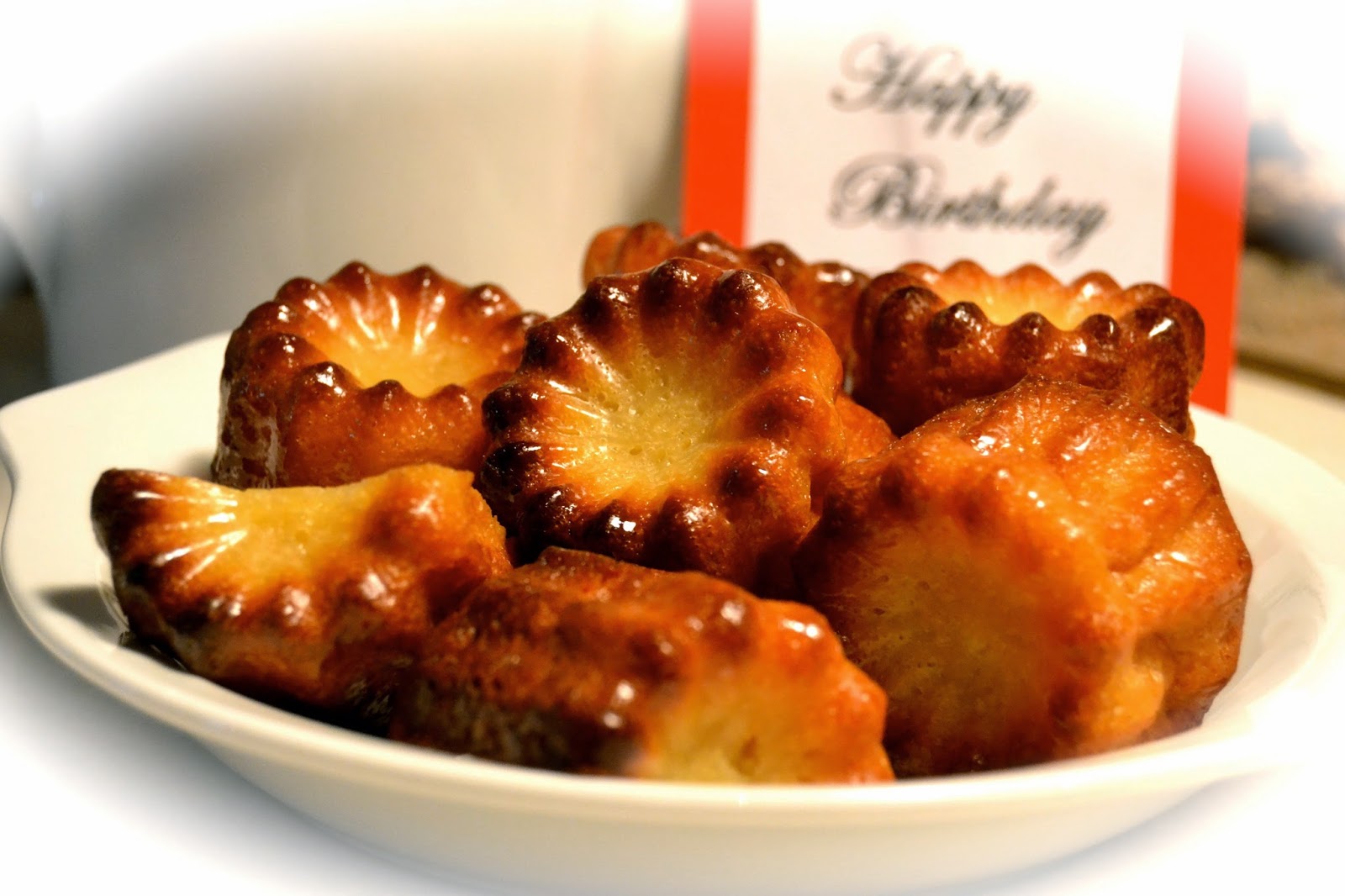 This week the Doristas are celebrating three big events.
The first and most important is Dorie Greenspan's birthday.
Second, her latest book - Baking Chez Moi- will be released.
This is something we have been anxiously anticipating.
And third, we are marking the 4th year of cooking together
from her book "Around My French Table".

It has been a delightful journey, one that has taught us many new
techniques, learned about different products which had been
unfamiliar to us, and added many new spices and cooking
utensils to our kitchen. 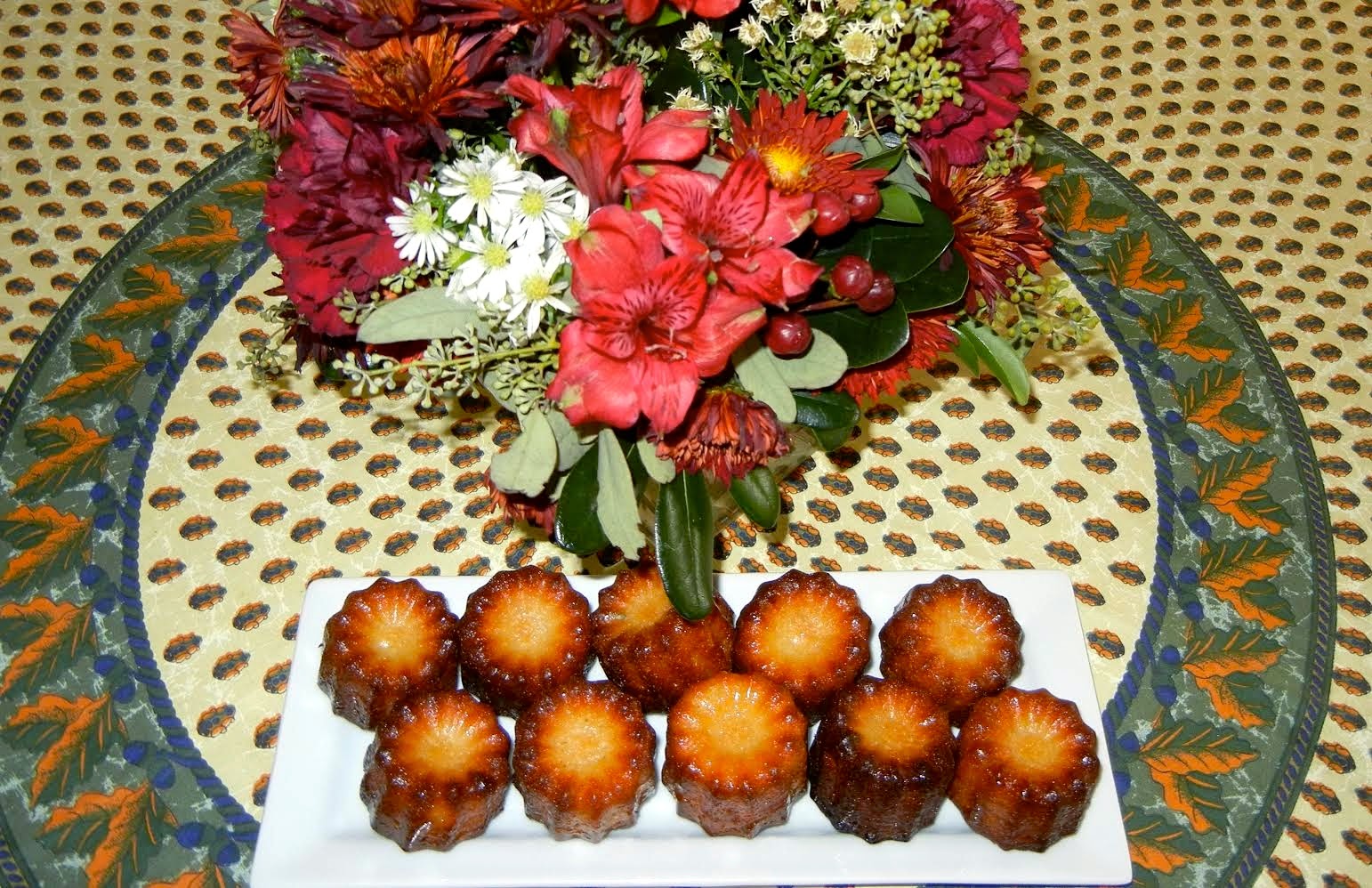 For Dorie's birthday I have prepared the Cannelés from Baking Chez Moi.
It only took three attempts to get them right, but I was determined.
Jim and I enjoyed these delicious little cakes with a delightful cup of
espresso and since I am not able to share these with Dorie in person,
I am sending her a photo. 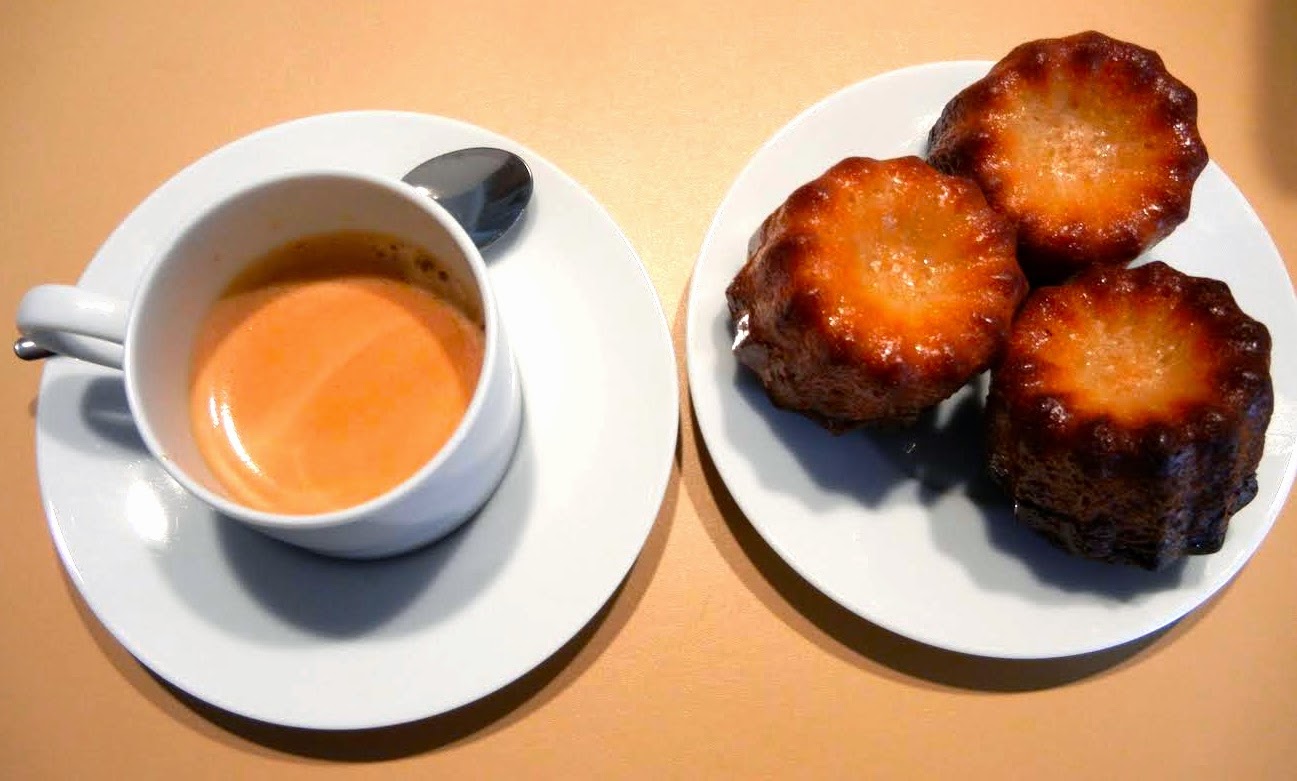 Happy Birthday Dorie.
Enjoy your special day and I wish you many, many more !

We have had a lot of anniversary celebrations around here lately and
while the blogging anniversary is only number 4 - that is quite a milestone.
Weekly blogging (ok, I do have a few make ups to do :) since 2010,
nearing the end of cooking an entire book of recipes, and taking a journey
that would lead us to gaining friends from around the world - including
the fabulous Dorie Greenspan herself- continues to utterly amaze me.
When I first heard of cannelés it was from a co-worker whose wife
is a foodie. She did copious research and learned that a farmer's market
on the Philadelphia Main Line, not far from us, supposedly had a vendor
with amazing skills at making this pastry. She was on the hunt. I had
never heard of them before and her verdict was lukewarm. She was a
skilled baker and tough critic and went back to making them at home.
And likely dreaming of a trip to Paris. I am still in touch with these
friends and report on my weekly recipes tested, especially the baked treats.
Now when I think of that farmer's market I instead think of our Boston
area Dorista- Betsy- and how Betsy has a sister somewhere near there......
so gee, wouldn't it be fun to get Nana and all meet up the next time
Betsy is in town ??  Yup.  Because that is what Doristas do when they
are not cooking cannelés in their own kitchens.  And because that is what
cannelés mean to me after four years of cooking with this group. 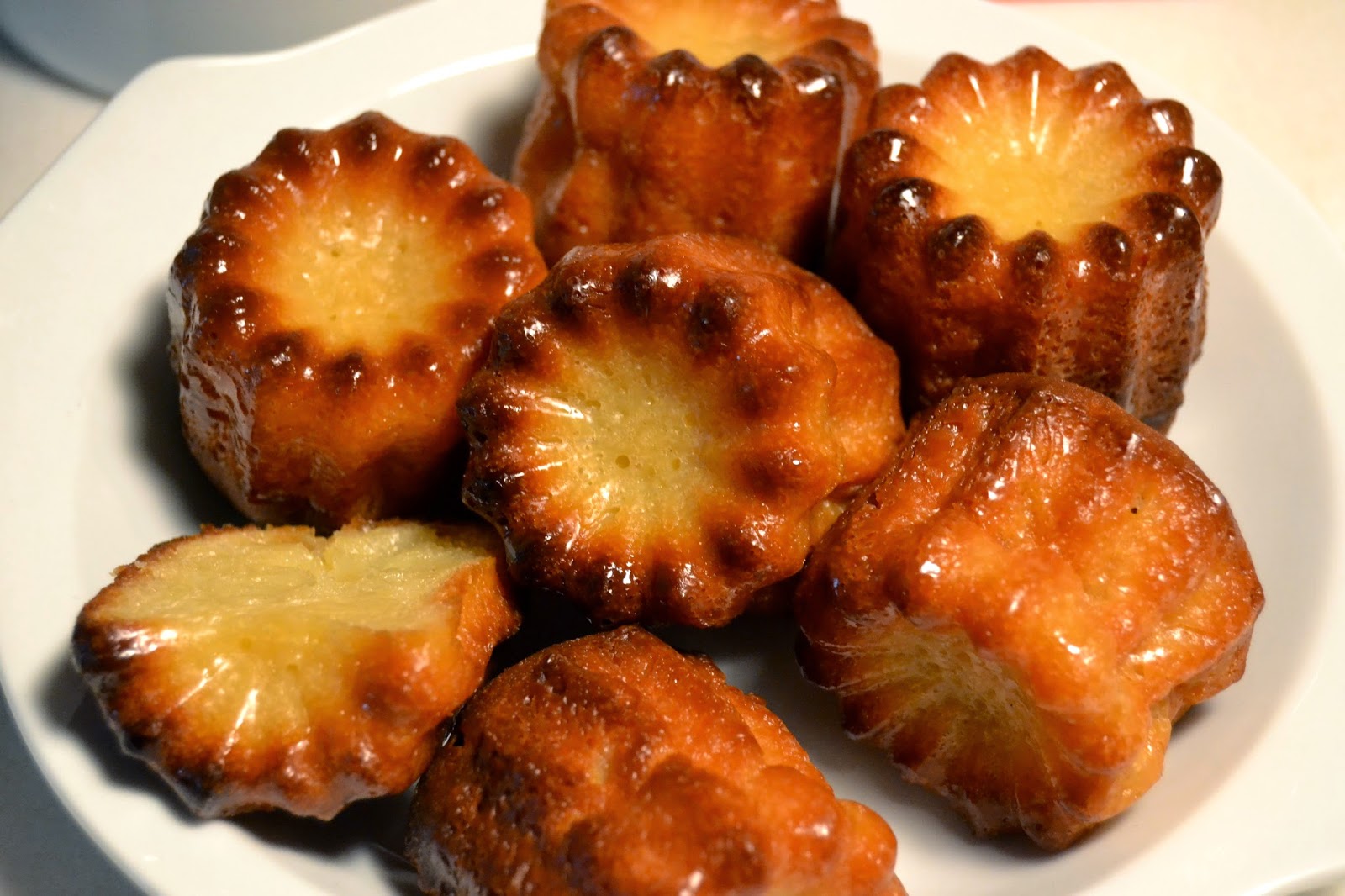 So how actually were they ?
Fabulous.
Utterly fabulous.
I picked up tips (and many a calorie) from Nana's delicious test runs and
aimed well at time in the oven. The aroma was amazing and the taste
was utterly delicious.  The tops that puffed out while baking became
a chewy sort of crispy consistency and my taste testers went NUTS.
I was already looking forward to Baking Chez Moi but this sealed the deal. 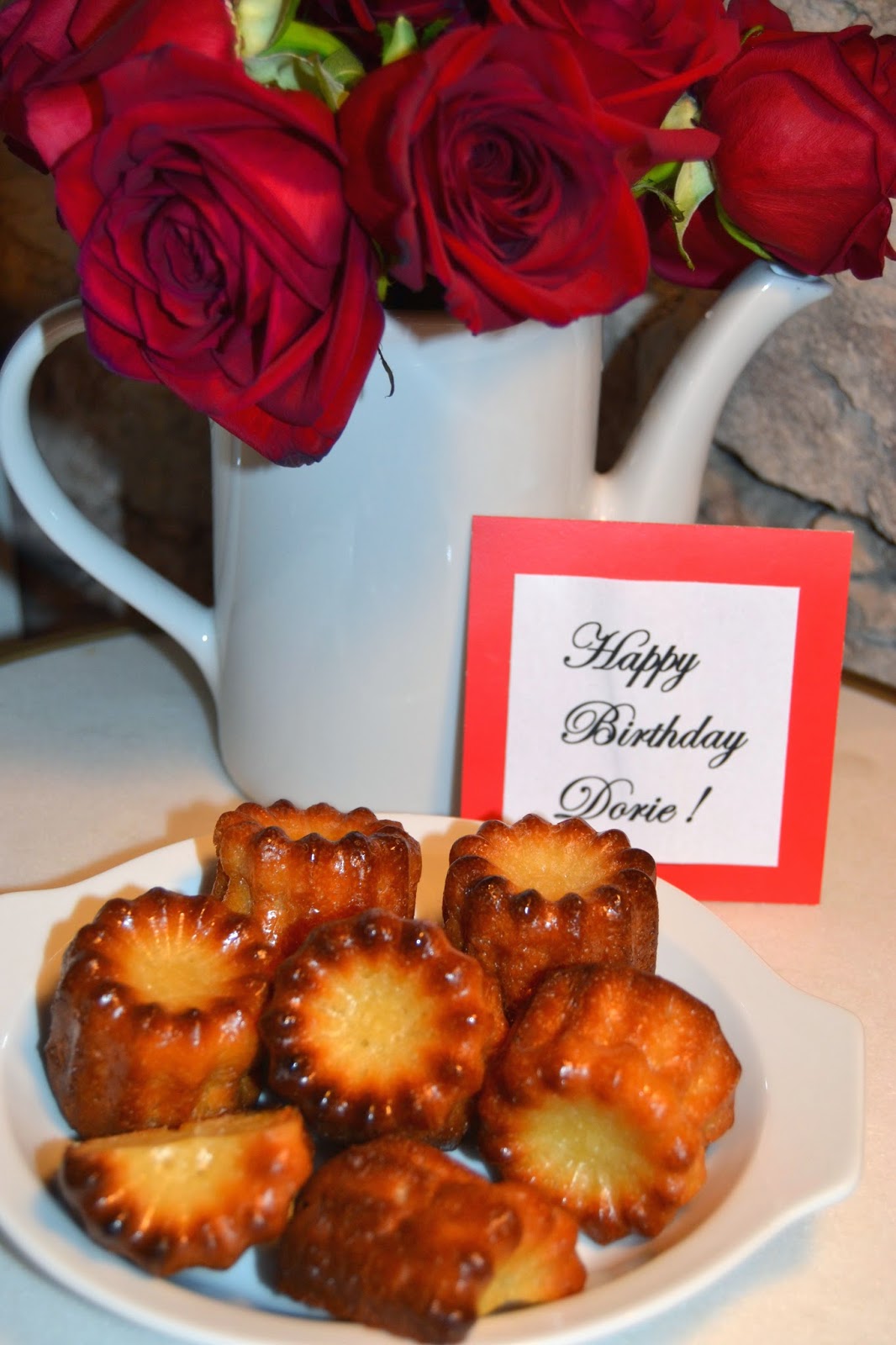 Thanks for everything Dorie and hope you have a spectacular birthday !
Posted by tricia s. at 7:47 PM